Thinx is bringing its period underwear to the masses.

The feminine care brand is expanding to major retailers with Thinx for All, its new lower-priced collection now available at select Target stores.

According to CEO Maria Molland, Thinx also plans to enter CVS, Urban Outfitters, and the Canadian chain London Drugs in the coming months, as the direct-to-consumer company continues to compete with traditional feminine care brands.

At $17, Thinx for All underwear products — which includes brief, bikini, and high-waisted styles in two colors that come in either moderate or super absorbency levels — retail at half the price of the brand’s premium underwear products and are available in sizes up to 4X, marking the company’s first foray into true plus-sizing. Molland said the company will roll out extended sizing for all of its products, including its traditional premium line and its recently launched activewear collection, by June.

Despite the cheaper price tag, Molland said Thinx for All uses the same absorbent technology as its traditional model, but pairs it with a more basic cotton-base fabric. She told Insider that while Thinx is aiming to get the product in front of more consumers, its goal is to do that without providing an “inferior period experience.”

“Our mission is to get out there and be the most innovative company, offering a new way for women to manage their periods,” Molland told Insider. “We’ve been doing a ton of research over the last few years around what were and are the barriers to getting people to try something new in this category because it’s such a behavior change.”

Pushing Thinx further into the mainstream

The push into mass retail marks the latest expansion effort for Thinx, after debuting its first athletic wear collection just a few weeks ago. It also comes on the heels of a particularly successful year for the brand. In 2020, Thinx increased revenue by 48% thanks in large part to consumers seeking out alternatives to traditional feminine care during the pandemic.

While Thinx’s original products have previously sold at retailers like Nordstrom and Kohl’s, Molland said giving the brand visibility in a drugstore environment through Thinx For All will be vital to continuing its educational efforts and expanding its audience base.

“Over the last few years, we’ve addressed the top two barriers, which was confusion on how to wash it and confusion on how the product works and why it would be comfortable,” Molland said. “The third barrier has always been price. It was a pretty distant third, but because we’ve ended up breaking down the barriers in the first two, now price is something we’re addressing.”

In order to strategically reach new shoppers in areas like Middle America, Thinx for All will debut at 250 select Target stores primarily located in suburban areas in the Midwest and the South.

“This is a way of reaching customers that have either never heard of us, because our brand awareness is relatively low in those areas, and people that have heard of us but they haven’t yet purchased because they don’t understand it very well,” she said. 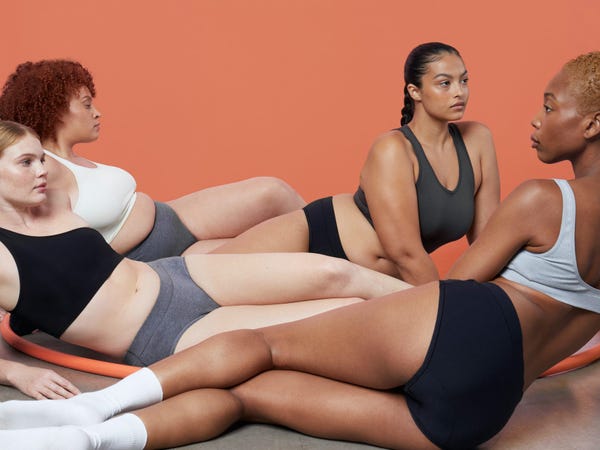 From DTC to mass retail

Thinx considered several brand partners to debut Thinx for All, and ultimately selected Target thanks to the big-box retailer’s history of working with DTC companies, Molland said. Thinx will be the latest among a series of DTC brands including Casper, Harry’s, and Native hitting the shelves of major retailers as the latter seeks to forge partnerships with emerging brands.

“They are willing to put up with us as we learn and grow, especially around our supply chain,” Molland said. “We’re a relatively small team and we haven’t done this before, so we need some forgiveness there and they are a company that does that because of their experience with DTC brands that are new to mass retail.”

Target’s core demographic also aligns closely with one of Thinx’s target shopper categories — mothers shopping for themselves and their daughters. Molland said Thinx for All will likely soon include other teen-oriented products as it continues to grow.

Looking ahead, consumer education will remain a top priority for Thinx. Though the lower-price line will start by being featured in the lingerie section, Molland anticipates the products will jointly be sold in feminine care aisles in the near future, as period underwear becomes increasingly normalized as a replacement for tampons and pads.

“The goal is really to compliment the existing underwear that people are buying,” she said. “It’s additive there, whereas in the feminine care aisle, we’re becoming more and more of a replacement to period products. One of our challenges is to convince the buyers that they should try something new that perhaps doesn’t have the same traditional economic metrics as the disposables.”

Florida Lawmakers Go Viral in Coronavirus Argument — with Shaq, Other Celebs Weighing In

Credit card: how you can save nearly £300 by switching deals as pre-approval rates double