Forty-two years elapsed between April 1976, when two university dropouts formed Apple Computer in a California garage, and August 2018, when the company became the first publicly traded corporation to hit a vaunted trillion-dollar valuation. Over that time, Apple released the Macintosh, the iMac, the iPod and then the iPhone.

It has taken just two years for Apple to repeat the feat. On Wednesday on Wall Street, the company's market value surpassed $US2 trillion ($2.8 trillion) for the first time, climbing to a record high before falling back slightly below the threshold. 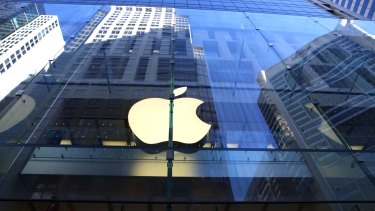 Apple has thrived during the pandemic.Credit:James Alcock

In the time it has taken Apple to go from one to two trillion dollars, the company has released no major new products. Its biggest initiatives have been a US-only credit card, an internet TV service that has been met with mixed reviews, and a gaming service.

In the three months to the end of June, Apple's sales were just 12 per cent higher than two years earlier. Profits have actually fallen, from $US13.3 billion to $US13.1 billion. This year, the global economy is due to contract heavily and millions lose their jobs.

These do not seem like conditions in which a company would double in value, but an unprecedented combination of events – many of them outside Apple's control – has made it the world's most valuable company.

Central banks around the world have stepped in with trillions of dollars of emergency stimulus measures to keep businesses running: cheap loans and bond buying programmes have pushed yields to record lows. As a result, investors seeking financial returns have turned towards the stockmarket, pushing shares to record highs.

Aswath Damodaran, of New York University's Stern School of Business, says this has sent the "implied equity risk premium" – the expected return from equities needed to justify investing in them – falling from around 8pc to 6 per cent in two years. By itself this is enough to lift stock prices by 50 per cent, all things being equal, so even companies that have not changed from two years ago have seen a boost.

"Every stock now has a lower return that you can expect to make, which translates into a higher price you're willing to pay upfront. It's percolating to any company that is able to maintain its earnings and cash flows," says Damodaran. "You just need to show them you can maintain 2019 earnings in 2020." Apple's price-to-earnings ratio – a measure of how highly valued a firm is relative to its financial performance – now sits at its highest level since 2007, before the financial crisis.

They're already incredibly strong companies, but the strong becomes stronger and that's basically what this crisis is.

Tech's dominance in the pandemic

Most companies have not been able to tread water. The US economy contracted at an annual rate of 32.9 per cent in the second quarter of the year. US corporate profits fell 6.6 per cent year on year in the first quarter, according to official statistics, as airlines, travel companies and retailers all suffered.

The tech industry, however, has thrived. Growing reliance on internet services, cloud computing and screens mean the "FANG" companies of Facebook, Amazon, Netflix and Google, as well as Apple and Microsoft, have largely increased sales and profits.

The pandemic has accelerated shifts towards online services, surprising even executives at the companies themselves. But it has also strengthened the companies' structural dominance. Rivals that are offline, less capitalised, or smaller, have struggled, so while the tech giants have become bigger in absolute terms, they have become even stronger in relative terms. 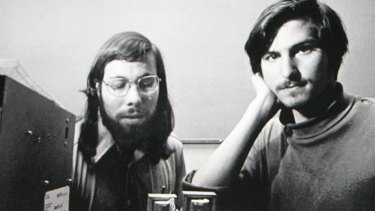 "The one thing about this crisis we've learned is while it might create short term damage for these companies, it actually makes their competitive position stronger," says Damodaran.

"Amazon has already been killing brick and mortar retail. Now, that coffin has been nailed shut. So one of the things that these companies have going for them is the longer this crisis continues, the more that competition is being hobbled and handicapped, which actually makes the long term stories even better as an investor. Samsung is much more damaged by this crisis than Apple is simply because it's much more capital intensive and has much more debt.

"They're already incredibly strong companies, but the strong becomes stronger and that's basically what this crisis is."

Apple's road to a $US2 trillion valuation has not been entirely down to financial quirks, however. The company is gearing up for the release of a new iPhone that analysts say could be its biggest launch yet.

While Apple has said the next iPhone will be delayed by several weeks, that has done little to dampen enthusiasm among investors. It is likely to be the first device that supports 5G mobile networks, an upgrade with questionable immediate benefits, but that will at least be a selling point in a smartphone market that has been short on innovation.

Analysts believe this could convince consumers that have been reluctant to upgrade to finally do so. "The death of the iPhone has been greatly exaggerated," says Dan Ives of Wedbush Securities.

"There's an opportunity to upgrade 350 million of 950 million worldwide iPhones. It's really the opportunity of a decade that Apple now has in front of it."

Apple's digital services such as the App Store, iCloud and Apple Pay have also shown their strength in recent months. Ives says that Wall Street has started valuing the division at up to $US700 billion – on its own, more than four times bigger than the biggest FTSE 100 company.

Critics say much of this part of the business has grown because of anti-competitive practices. Apple is being sued by Fortnite developer Epic Games over the fees it charges developers on the App Store, and Spotify claims that rival Apple Music service has an unfair advantage by being installed by default.

The European Commission, meanwhile, is investigating Apple Pay's privileged access to the iPhone's contactless chip. Any of these threaten to clip the growth that has sent Apple to its record-breaking valuation. For now, investors seem to be betting that will not happen.

Education Secretary DeVos warns about wave of private school closings: 'That's a crisis in the making'