House lawmakers voted to pass President Biden’s expansive spending bill Friday despite opposition from Republicans and lingering questions about the White House’s claim that the cost of its policies will be fully covered.

The vote was 220-213 with Rep. Jared Golden, D-Maine, the only Democrat breaking with his party to oppose the bill.

House Speaker Nancy Pelosi, D-Calif, aimed to vote on the bill Thursday night but House Minority Leader Kevin McCarthy, R-Calif., delivered a marathon, scathing floor speech, that lasted more than eight-and-a-half hours and forced the vote to Friday. He said Democrats are "out of touch" with ordinary Americans as he railed against the bill. 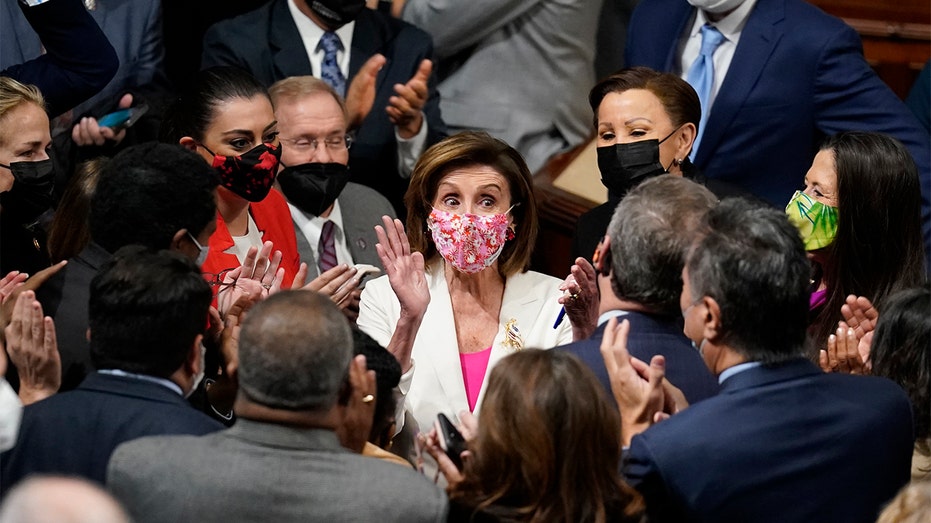 Speaker of the House Nancy Pelosi, D-Calif., celebrates the House passage of President Biden’s expansive social and environment bill with other Democrats in the House Chamber, at the Capitol in Washington, Friday, Nov. 19, 2021. (AP Photo/J. Scott Applewhite / AP Newsroom)

"From bank surveillance to bailouts, this bill takes the problems President Biden and Democrats have already created and makes them much, much worse," McCarthy said.

McCarthy's speech was the longest floor speech in House of Representatives history, surpassing a speech Pelosi gave in 2018. 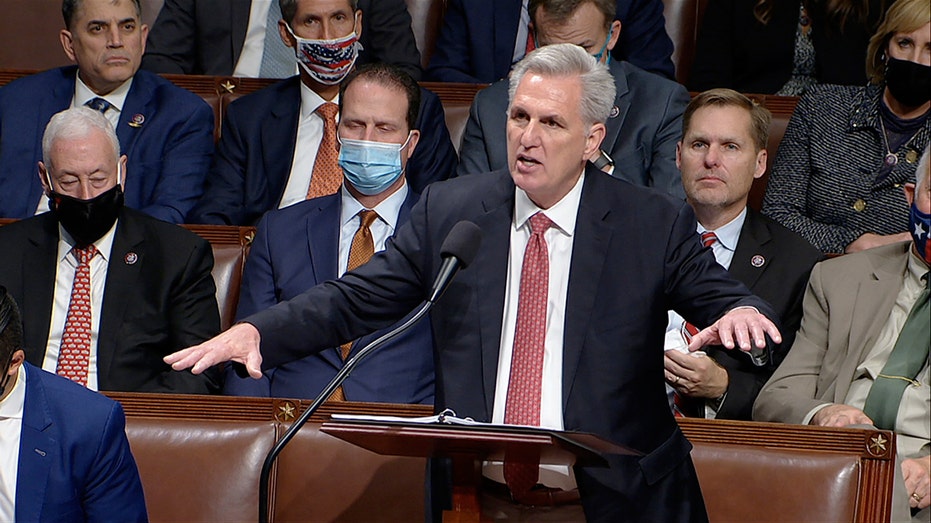 In this image from House Television, House Minority Leader Kevin McCarthy of Calif., speaks on the House floor during debate on the Democrats’ expansive social and environment bill at the U.S. Capitol on Thursday, Nov. 18, 2021, in Washington. (House (AP Newsroom)

The Biden administration and top Democratic officials say the bill’s costs will be fully covered by offset measures included in the spending bill. Those measures include tax hikes on corporations and the wealthiest Americans, increased IRS tax enforcement and prescription drug pricing reform.

The White House says the offsets will generate approximately $2 trillion in new revenue through 2013, enough to pay for the "Build Back Better Act" and, eventually, to reduce the federal deficit. But an analysis from the Congressional Budget Office released earlier in the day contradicted that claim.

The CBO determined the spending bill would add $367 billion to the federal deficit over 10 years, not including the IRS plan’s impact. Separately, the nonpartisan agency determined increased IRS tax enforcement would generate about $127 billion in new revenue, far below the $400 billion estimate touted by the Treasury Department and the White House. 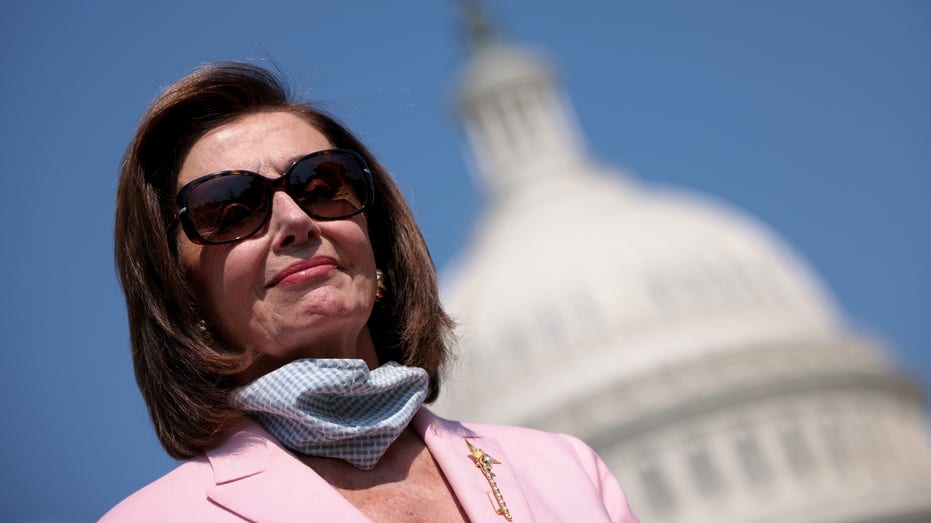 Despite the CBO’s findings on the IRS provision, Treasury Secretary Janet Yellen said the CBO score, coupled with analysis from the Treasury and the Joint Committee on Taxation, confirmed the bill was "fully paid for" and would lower the deficit long-term. House Pelosi made a similar assertion, telling Democratic lawmakers ahead of the vote that the difference in IRS estimates would "not be an issue."

The House only managed to pass the reconciliation bill after months of deliberations between progressive and moderate lawmakers, and Democrats face a rocky road ahead in the Senate, where the party split is 50-50.

Moderate Sens. Joe Manchin, D-W.Va., and Kyrsten Sinema, D-Ariz., are expected to force significant changes to the bill and have made no promises to support the final legislation. And it's not clear House progressives will support what comes out of the Senate, which could be working on the bill deep into December.