High flying software group Altium has blamed the impact of the coronavirus and a slow start for its Octopart business for a downgrade to its financial forecasts.

Delivering its half-year results Atlium said it now expects full year revenues and profit margins to come in at the lower end of a previously stated range. Its shares had just hit a record high of $42.53 in anticipation of the announcement. 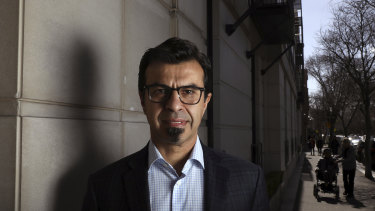 "They are still going to hit guidance but the share price has run so hard the market was likely expecting another upgrade," said Altium investor TMS Capital's Ben Clark after the announcement.

Altium confirmed that revenue would still be between US$205 million to US$215 million with an earnings before, interest, tax, depreciation and amortisation (EBITDA) margin of 39 per cent to 40 per cent.

"Notwithstanding the strong first half performance, the company is likely to land at the lower end of the full year guidance range. This is due to the emerging uncertainty about the impact of the Coronavirus in China and the slower start to Octopart in the first half," the company said.

Altium chief executive Aram Mirkazemi said China continued its powerful performance in the first half. "However, the unfolding developments associated with the Coronavirus" is expected to have a significant impact on its second half performance, he said.

Altium said Octopart – a search engine, that helps electronics designers find the right components for their inventions – was negatively impacted by the reduced volume in the parts distribution industry due to an inventory build up driven by the trade war. It was also "temporarily impacted" by changes to the Google search algorithm, said Altium.

According to Bloomberg, analysts are forecasting the company will report revenue totalling more than $US210 million for the year, and earnings before interest and tax (EBITDA) of $US81 million.

For the half year ending December 31, Altium reported revenue growth of 19 per cent to $US92.8 million with strong performances in all key business units and regions except for Octopart.

Its reported net profit was down slightly to $US23 million due to a higher tax rate, but EBITDA was up 22 per cent to $36.8 million.

"Altium has delivered a strong performance for the first half, particularly in comparison with an outstanding first half performance in fiscal 2019," said Mr Mirkazemi.

"Revenue growth of 19 per cent and an EBITDA margin of 37 per cent, excluding the positive impact of the new leasing standard, for the half mark over eight years of successive periods of double-digit revenue growth and expanding margin.”

The company's software designs the electronic circuitry which is at the heart of a growing range of everyday goods which are being connected to the internet.

The long term goal is to create a digital platform to manage the design, manufacture and distribution of goods for the $US2 trillion global electronics industry.

Altium announced an unfranked half year dividend of 20 cents a share, up 25 per cent from the prior first half.

After a bitcoin crackdown, China now calls it an 'investment alternative' in a significant shift in tone