You know how every family has THAT relative who’s been holding onto everyone’s deepest, darkest secrets and just waiting to spill them at the thirstiest possible moment? Well, allow me to introduce you to Donald Trump’s niece, Mary Trump, who—mere months before the 2020 presidential election—is dropping a bombshell book called Too Much and Never Enough: How My Family Created the World’s Most Dangerous Man, which is apparently filled to the brim with Trump family drama.

Mary’s tell-all, which drops on July 28, promises to be “harrowing and salacious.” So, who is this previously unknown Trump coming to steal Donald’s spotlight? Let me bring you up to speed.

First of All, Some Basic Facts

Mary is the daughter of Donald Trump’s brother Fred Trump Jr.—in other words, she’s President Trump’s niece. She’s been largely out of the public eye, save for some major family drama back in 2000 that we’ll get to in a sec. Some other facts? Mary has a Ph.D. in clinical psychology, lives on Long Island, is a life coach, and judging from her alleged Twitter account, she’s super into cats. 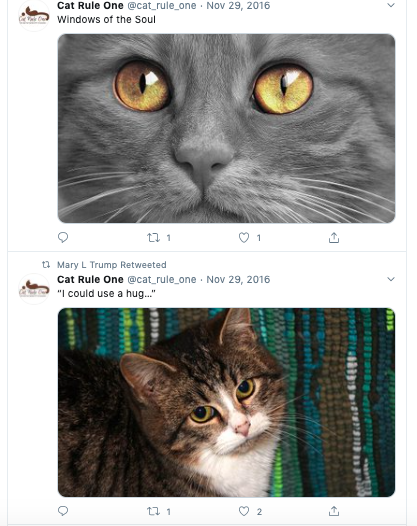 According to the description on Amazon, Mary’s tell-all chronicles “a nightmare of traumas, destructive relationships, and a tragic combination of neglect and abuse. She explains how specific events and general family patterns created the damaged man who currently occupies the Oval Office, including the strange and harmful relationship between Fred Trump and his two oldest sons, Fred Jr. and Donald.”

Yep, Trump Is Probably Suing Her

President Trump is unsurprisingly not just going to sit around and wait for his niece’s bombshell book to drop, so apparently he’s already gotten a team of lawyers involved. Per The Daily Beast, Trump wants to “explore what could be done in the way of legal retribution.”

Mary and her brother Fred Trump III (totally casual name) sued their aunts and uncles—including Donald—back in 2000, disputing the handling of their grandfather Fred Trump Sr.’s will.

According to The Daily News, Fred and Mary claimed Fred Sr. was suffering from dementia and his will was “procured by fraud and undue influence” from Donald, Maryanne, and Robert Trump. Mary and Fred asked for 1/5 of their grandfather’s estate, and in response to the lawsuit, Trump allegedly cut off health insurance for Fred’s son, saying “When [Trump III] sued us, we said, ‘Why should we give him medical coverage?”

At the time, Mary made a rare public statement saying, “My aunt and uncles should be ashamed of themselves. I’m sure they are not.”

She Signed a NDA, So Her Book Might…Be a Problem

Apparently, Mary signed a NDA following a 2001 settlement related to that whole estate drama—at least, according to The Daily Beast. The NDA states that she can’t speak about her relationship with her aunt and uncles, so, yeah…this could get messy.

I mean, at least according to this tweet she fired off on November 9, 2016!

This is one of the worst nights of my life. What is wrong with this country? I fear the American experiment has failed.

Back in October 2018, the New York Times published an investigation into Trump’s taxes and wealth, and rumor has it that Mary outs herself as the source in her book. Not only does she apparently admit that she supplied the paper with Fred Trump Sr.’s tax returns, but also a bunch of other confidential family documents.

Wowowowowow. That’s all for now, but we’ll keep you informed…much like Mary kept the NYT informed, I guess!

2020 is a stressful mess. Now, brands are trying to capitalize on the dystopian year from hell.