Electronics and furniture retailer Harvey Norman has reported a fall in pre-tax profits due to weaker local sales and increased support payments to its almost 200 franchisees, providing a grim outlook for the business which sent its shares tanking.

Profit before tax slid 4.6 per cent to $301 million for the December half, the company said in a statement to the ASX on Friday morning. Net profit dropped 4.1 per cent to $213.5 million even as comparable sales across all its operations edged up 1.6 per cent, thanks to its international stores.

Looking at the current half, Harvey Norman sees Australian stores sales dropping 3 per cent on a comparable basis due to "subdued retail sentiment and the prolonged, unprecedented natural disasters experienced during the current period".

At the same time, the coronavirus outbreak would likely dampen offshore sales for the remainder of the year, the business warned, putting a dent in consumer confidence. Its shares opened sharply lower, trading down 8.3 per cent at $3.96 shortly after 11am while the S&P/ASX200 lost 3.2 per cent. 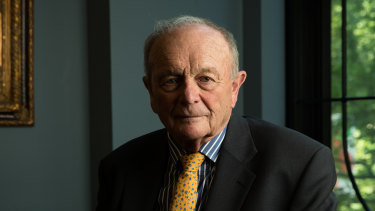 Looking at the six months through December, sales at company-owned and franchised stores grew 1.9 per cent to $4.07 billion, but comparable aggregated sales for Harvey Norman's Australian stores were flat, missing analyst expectations of a 0.2 per cent lift.

The company pinned this drop on difficult trading conditions caused by the bushfire crisis, which led to a $23 million rise in "tactical support payments" to affected stores to help them stay open. This also led to a drop in franchise margins from 5.3 per cent to 4.19 per cent, one of the lowest levels and largest declines since 2015, it said.

Harvey Norman's overseas operations continued to be the main driver of growth, with offshore profits rising 5.4 per cent to $81.69 million for the half. Comparable sales in locations such as Ireland, Slovenia and Malaysia all saw sizeable increases, though the company's Singapore locations dropped sales by 4.1 per cent.

The retailer's massive property portfolio also posted gains, with Harvey Norman's net assets now valued at $3.28 billion, a 4.2 per cent increase on the prior corresponding half. Property accounted for $2.97 billion of assets.

"We make sure that our properties are maintained to a high-quality standard, synonymous with our reputable brand, and we ensure that the layout and floorspace can be quickly adapted to the changes in retail trends and consumer tastes," executive chairman and founder Gerry Harvey said.