‘The Five’ discuss the case in which the three defendants — Travis McMichael, his father Gregory McMichael, and their neighbor William Bryan— were found guilty of murder.

“The Five” reacted to the trial of Ahmaud Arbery in which three men were found guilty Wednesday of felony murder in Georgia, noting that this was an example of the justice system working.

“One thing that’s also interesting is that we’re celebrating Thanksgiving tomorrow as a country, and we give thanks for our nation and our system [of] a trial by jury. It’s sometimes … slow and it takes a long time – it’s been a year and a half. But you know what? It works,” Dana Perino said about the outcome in the Arbery case.

In addition to felony murder the defendants – Travis McMichael, 35; his father, Gregory McMichael, 65; and their neighbor William Bryan, 52 –  were also convicted of aggravated assault, false imprisonment, and criminal attempt to commit a felony.

The younger McMichael was found guilty of “murder with malice,” which is when a defendant deliberately and unlawfully kills a person.

“The Five” panel continued on to discuss the stark differences in the trial of Kyle Rittenhouse and the Ahmaud Arbery case. Greg Gutfeld commented that the media and others would have a better chance of predicting how a jury will rule in the case if they followed the facts instead of viewing everything through the lens of race. 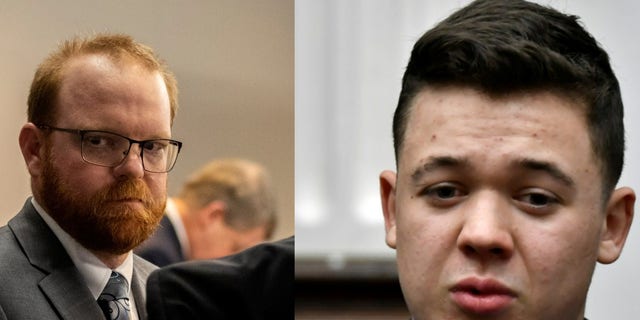 <strong>Left</strong>: Travis McMichael looks back at his mother and sister in the courtroom after the jury convicted him for the murder of Ahmaud Arbery in the Glynn County Courthouse, in Brunswick, Georgia, U.S., November 24, 2021. <strong>Right</strong>: Kyle Rittenhouse starts to get emotional a second time as he is on the witness stand during his trail at the Kenosha County Courthouse in Kenosha, Wisconsin, November 10, 2021.  Sean Krajacic/Pool via REUTERS
(Left: Stephen B. Morton/Pool via REUTERS Right: Sean Krajacic/Pool via REUTERS)

“So you humans do like to group things, especially when incidents happen close together,” Gutfeld said. “For me, you have the Rittenhouse case and you have the Arbery murders. These are close together. But it shows you that if you pick the right filter, which is the filter of self-defense, you would have easily predicted the outcomes of both cases.” 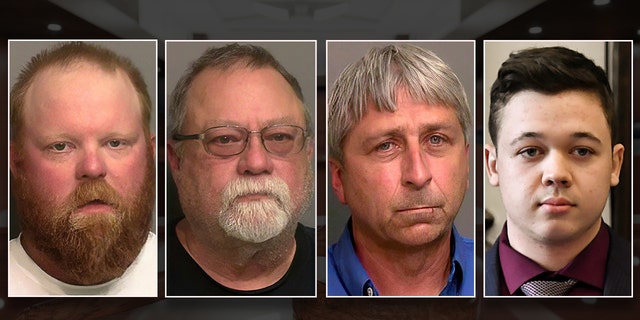 This combo of booking photos provided by the Glynn County, Ga., Detention Center, shows from left, Travis McMichael, his father Gregory McMichael, and William "Roddie" Bryan Jr. The Justice Department announced federal hate crime charges against the three men last month  in the death of Ahmaud Arbery, a Georgia man who was killed while out for a run last year. They pleaded not guilty Tuesday. (Glynn County Detention Center via AP) ____ Kyle Rittenhouse walks during his trial at the Kenosha County Courthouse in Kenosha, Wisconsin, U.S., November 19, 2021.  Sean Krajacic/Pool via REUTERS
(Glynn County Detention Center via AP  |  Sean Krajacic/Pool via REUTERS)

Arbery was an unarmed 25-year-old Black man who was chased and then killed as he attempted to flee from the defendants in Satilla Shores, Georgia.

The prosecution believed Arbery was killed because “he was a Black man running down the street.” The defendants claimed they were trying to carry out a legitimate citizen’s arrest, a law that has since been repealed in Georgia, and that Travis McMichael shot Arbery in self-defense. 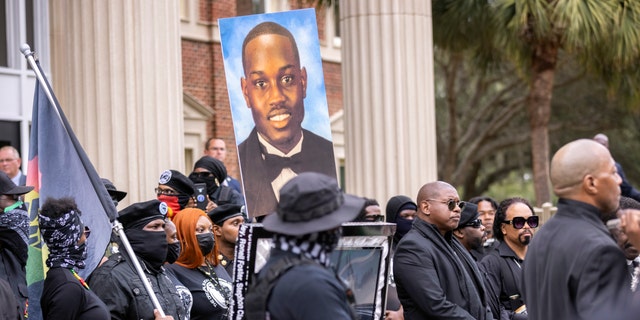 Dozens of Black Lives Matter and Black Panther protesters gather outside the Glynn County Courthouse where the trial of Travis McMichael, his father, Gregory McMichael, and William "Roddie" Bryan is held, Monday, Nov. 22, 2021, in Brunswick, Ga. The three men charged with the February 2020 slaying of 25-year-old Ahmaud Arbery. (AP Photo/Stephen B. Morton)
((AP Photo/Stephen B. Morton)

“The point is you need to have more than one filter in life or you’re going to be very, very confused. I feel great about this decision. The justice system worked … the media [assumed] that … White jurors only vote in a specific way and they grouped in in a bigoted, uniform, bigoted manner. And we know that this isn’t true and it shows you how every case is different. Every case is nuanced. Avoid these sweeping generalizations,” Gutfeld said.

UK Property: Asking prices soar as buyers flock back to the market after Brexit

Kanye West wants to break up with Corporate America. But it won’t be easy

Former Congressman with Anti-Gay Record Announces He Is Gay: 'I Regret the Time Wasted'