As a former Jetstar executive and now boss of Medibank Private, David Koczkar has plenty of experience getting inside the mind of customers and says health customers are not that different from budget travellers when it comes to their demands.

The stakes, of course, are often higher: “Our customers are not trying to go on holiday – they’ve got a serious issue to deal with,” he says. 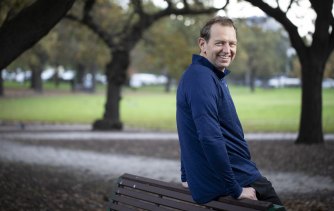 David Koczkar held a number of senior executive roles including at Jetstar prior to helming Medibank Private. Credit:Arsineh Houspian

Mr Koczkar is keenly aware that his members’ demands are changing, fast.

“They want to, if appropriate, have care more digitally, more virtually, and they want to have rehab in the home.

“They want to stay in hospital for as limited time as they can so they can get on with their life,” he says.

After a turbulent 18 months dominated by the coronavirus pandemic, Australia’s private health insurance sector is at a crossroads as it considers what role it can play in a post-pandemic world. Shutdowns of allied healthcare and elective surgery have made it difficult for funds to forecast profits, but all have been eager to prove they will not generate super profits due to any slowdown in health services.

Last month, Medibank confirmed it was handing back $105 million in net claims savings back to its members through discounts on policies.

At the time he took the reins at the $9 billion insurer earlier this year, just weeks before Melbourne was plunged into another lockdown, Koczkar had already spent years as the chief commercial officer of the fund.

Prior to that, he was overseeing Jetstar’s customer and commercial business. Despite the very different products on offer, he says there’s overlap in the priorities of airline passengers and health fund members.

“Very similar to the travel industry, they [health members] wanted greater control, they wanted more transparency, they wanted a greater choice. And when faced with decisions, they wanted people to help them make the right decisions to, to go experience the world,” he says.

The sector is staring down bigger changes, too. As funds weigh up the role of virtual and remote care, they are also looking at new ways to unlock member’s data so they can provide broader services, from wellness to preventative programs for underlying health conditions.

As with former Medibank boss Craig Drummond, Koczkar believes the key to keeping the nation’s healthcare system sustainable lies in both prevention and finding ways to give patients more choice in how they’re treated, particularly at home.

‘If you look at other Western countries, probably 30, 40, 50 per cent of some procedures, certainly joint replacement procedures are done in either day or short stay settings.’

One key opportunity on the radar is expanding a pilot of the fund’s no-gap joint replacement program, which focuses on short-stay hospital visits and where members don’t pay out-of-pocket expenses.

The fund will now extend this to seven hospitals, allowing 500,000 members access to it through their cover.

Koczkar says if the private system could target 30 to 40 per cent of procedures such as hip and knee replacements on a short-stay basis, it could save the system hundreds of millions of dollars a year. “This is better for customers, it’s better for the system. And it’s better value for really everyone,” he says.

“If you look at other Western countries, probably 30, 40, 50 per cent of some procedures, certainly joint replacement procedures are done in either day or short stay settings,” he says.

As insurers focus on new models, there are fears from some parts of the medical community that Australia could be adopting US-style healthcare trends that don’t benefit patients.

Earlier this year, the competition watchdog issued a draft decision that would let listed insurer Nib and health services company Honeysuckle Health form a buying group that would collectively negotiate contracts on behalf of a group of health insurers.

Medibank and some other major insurers will not be involved in the group. The ACCC said the proposed setup would result in public benefits including “more choice for insurers and other healthcare payers … increased competition between buying groups”.

However, the move has prompted medical groups including the Australian Medical Association to warn the model gives too much control to funds over how patients receive care, and warned against such models gaining traction.

Koczkar says there is no room in the Australian system for US-style approaches that reduce flexibility for patients. “There’s no place in Australia for US-style managed care. That’s about reducing choice. What we’re about is increasing choice,” he says.

“The current healthcare consumer is now very different to the past,” she says.

“For a younger generation brought up with smartphones, Uber and Amazon – they are not going to be satisfied with a health system that says they will only have an appointment at a random time that they can’t control.”

The sector is well aware of this challenge with quarterly figures from the Australian Prudential Regulatory Authority routinely showing Australians under 35 leaving the system.

“Future membership growth among younger people is likely to continue to be challenged by ongoing concerns with value and affordability of private health insurance,” APRA noted in its May quarterly report.

This is a trend Koczkar is keen to buck. Medibank surprised at its half-year results in February when it reported a 2.7 per cent growth in policyholders. “We’re seeing younger customers growing. In the system, we saw a majority of our growth as a company, in customers under 40,” he says.

Those in the insurance sector say this cohort is also more willing than ever to share more information about themselves to help funds shape more holistic care.

“Our customers are asking us our advice, and information. And they want us to support them in a broader way.”