California’s Secretary of State’s office reports that 21% of registered voters in the Golden State have cast ballots in the recall election of Gov. Gavin Newsom.

The latest data from election officials comes with 12 days to go until the Sept. 14 deadline for voters to mail or drop into secure boxes their ballots in the recall contest of the embattled Democratic governor.

State election officials in the middle of last month began mailing ballots to California’s 22 million registered voters as the Republican replacement candidates stepped up their attacks on the governor and Newsom kicked into high gear his efforts to encourage supporters to vote. 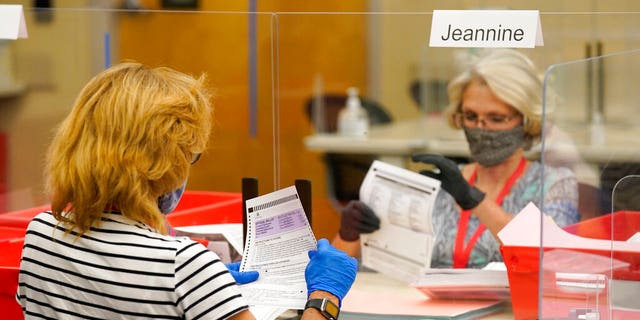 Election workers inspect ballots for damage that have been received for the Sept. 14 recall election at the Sacramento County Registrar of Voters office in Sacramento, Calif., Monday, Aug. 30, 2021. (AP Photo/Rich Pedroncelli)
(AP)

While Democrats greatly outnumber Republicans in the heavily blue state of California, public opinion polls conducted this summer suggested that those likely to cast ballots in the contest were divided on whether to recall Newsom.

Newsom and his allies acknowledge they need a strong turnout among Democrats to counter Republican voters motivated to cast ballots in hopes of ousting the governor. The new data updated Thursday from election officials indicates that 30% of ballots have been returned in the Democratic stronghold of San Francisco County in a potentially promising sign for Newsom.

Voters are being asked two questions on the Newsom recall ballots. The first question is whether the governor should be removed from office. If more than 50% support removing Newsom, the second question offers a list of candidates running to replace the governor. If the governor is recalled, the candidate who wins the most votes on the second question – regardless of whether it’s a majority or just a small plurality – would succeed Newsom in steering California.

Most public opinion polls conducted in July and August indicated that likely voters were divided on whether to recall Newsom. But a new survey taken Aug. 20-29 by the Public Policy Institute of California and released late Wednesday indicates that only 38% of likely voters support removing Newsom, with 58% saying they’d vote no on the first question on the ballot.

Roughly half of likely voters (49%) said they either have not decided or would not vote for any of the 46 replacement candidates on the recall ballot. Among the other half, who expressed a preference for a replacement candidate, conservative talk radio host Larry Elder was in the lead with 26% support. Five percent backed Republican Kevin Faulconer, a former two-term mayor of San Diego. Three percent supported both 2018 GOP gubernatorial nominee and businessman John Cox and state lawmaker Kevin Kiley, with 1976 Olympic gold-medal-winning decathlete turned transgender rights activist and nationally known TV personality Caitlyn Jenner at just 1%.

The recall push was launched in June of last year, fueled by the state’s COVID restrictions on businesses and houses of worship, school shutdowns and even opposition to the state’s high taxes. But the effort surged in the autumn after Newsom’s dinner at an uber-exclusive restaurant, which – at best – skirted rules imposed by the governor to prevent the spread of the coronavirus.

Congress Still At Stalemate Over Another Round Of Coronavirus Relief