Senate Majority Leader Chuck Schumer (D-N.Y.) rejected the idea of a “strategic pause” to the Democrats’ plans for an ambitious package of spending on climate, health care, immigration and other “human infrastructure” policies.

“We’re moving full speed ahead … we’re moving forward on this bill,” Schumer said on a press call Wednesday when asked about Sen. Joe Manchin’s (D-W.Va.)’s concerns with the multitrillion-dollar legislation.

The moderate West Virginia Democrat last week urged his party to “hit the pause button” and scale back the size of the package to contain “only what America can afford and needs to spend.” He cited the risk of “runaway inflation” and national security implications following the U.S. withdrawal from Afghanistan as reasons to hit the brakes on the bill.

Manchin holds leverage over the process because Democrats can’t afford to lose a single vote in the evenly divided Senate if they want to pass the bill under a special process known as reconciliation, which allows them to sidestep a GOP filibuster. 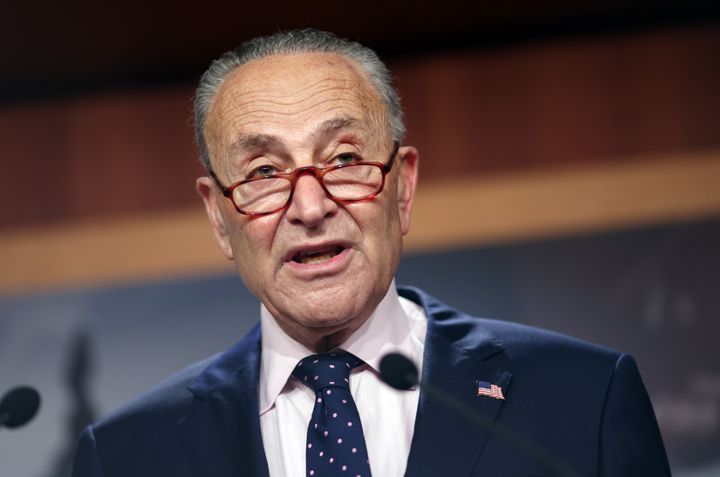 What’s not clear at the moment, however, is whether Manchin is actively threatening to vote against advancing the bill, which hasn’t actually been written yet, once the Senate returns from recess next week. He could simply be using his influence to narrow the size of the measure in order to squeeze out policies he doesn’t like, like robust funding to fight climate change and home health care.

According to Axios, Manchin has privately warned party leadership that he won’t support more than $1.5 trillion of the proposed $3.5 trillion plan. That sum would drastically slash much of Biden’s proposed programs, such as an expanded child tax credit.

Manchin’s demands present a big complication for President Joe Biden’s legislative agenda as Democratic leaders race to pass the bill in the coming weeks. But progressives in both the House and Senate have their own wish list; namely, that a package totaling $3.5 trillion is already the bare minimum when it comes to tackling major problems like climate change, whose devastating effects have been felt acutely this year in both the U.S. and around the world.

“In reconciliation, we’re going to all come together to get something big done. It’s our intention to have every part of the Biden plan in a big and robust way,” Schumer said on the Wednesday call.

“Without unity, we’re not going to get anything,” he warned.

Congressional committees are meeting this week to draft the bill before the chamber reconvenes later this month to consider it. House Speaker Nancy Pelosi (D-Calif.) was equally dismissive of Manchin’s call for a delay when asked by reporters on Tuesday.

“Why?” Pelosi said when questioned about lowering the bill’s price tag.

Latest Posts
bid dosing of atenolol
HMRC warning: Britons may face ‘unexpected charges’ when buying this Christmas
European markets in positive territory as investors digest Fed comments
anastrozole vs chemo
This Is the Average Cost of a Home in Every State
Recent Posts