Texas Sen. Ted Cruz, a man once touted as the next president, is on a downward spiral.

The Republican senator has found himself back in the spotlight for all the wrong reasons after he took an ill-timed trip to Cancun, Mexico with his family during a catastrophic winter storm that left more than 20 people dead in his state.

Cruz, the son of a Cuban immigrant, has been interested in politics from a young age. He quickly became a rising star in the right-wing of the party and gained attention for his conservative stances and strong public speaking skills.

But his refusal to accept the 2020 election result as well as his recent trip to Mexico, has made him one of the most talked-about people in Congress — for the wrong reasons.

Scroll down to find out more about the life and career of the Texas senator. 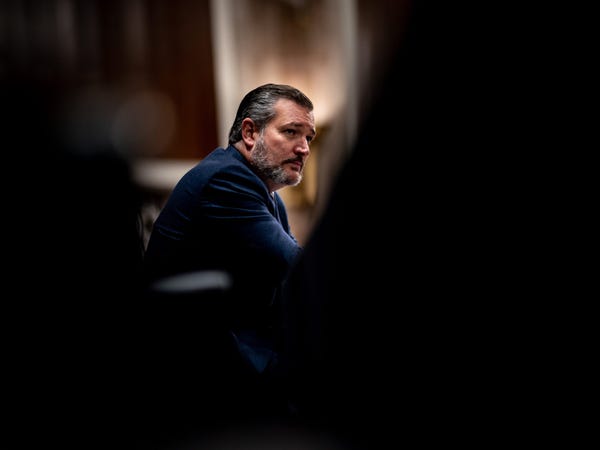 Because he was born in Canada, Cruz held dual American and Canadian citizenship.

However, he formally gave up his Canadian citizenship in 2014 after questions about his eligibility to become US President.

Cruz's parents, Rafael and Eleanor, met at the University of Austin while studying mathematics. After they moved to Canada, they set up an oil-services company. 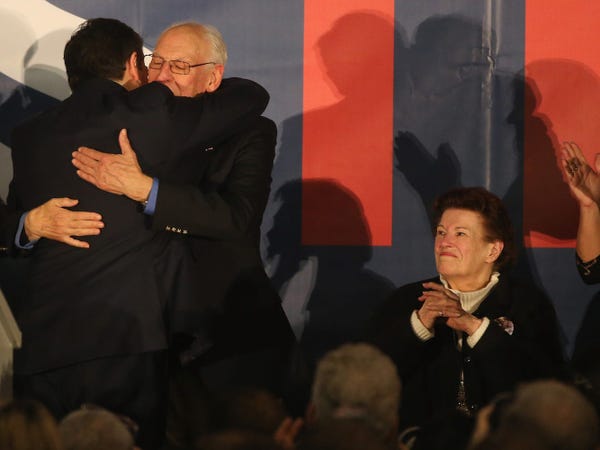 Both parents had been previously married. Cruz has two half-sisters from his father’s earlier marriage, one of which died in 2011 after an accidental overdose.

He does not speak about them publicly.

Cruz's father, Rafael, was born and raised in Cuba. As a teenager, he strongly aligned himself with the anti-Batista movement and fled to Texas in 1957 after Batista agents badly beat him. 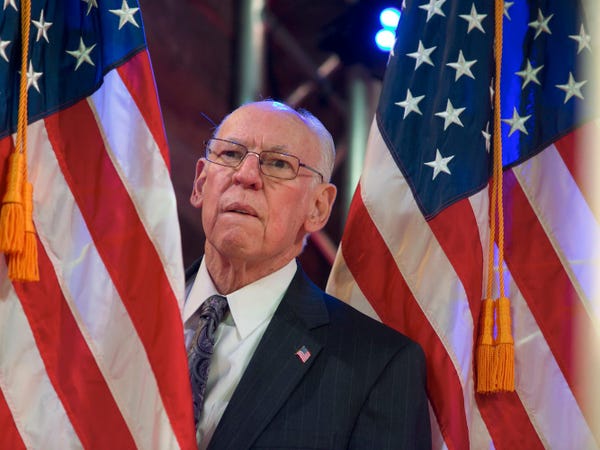 He gained political asylum four years after his arrival and became a citizen in 2005.

But some of Rafael’s former comrades and friends disputed some of his descriptions of his role in the Cuban resistance.

In a 2015 New York Times article, Leonor Arestuche, a student leader in the 1950s, said that Rafel was a “ojalateros,” or wishful thinker.

She said the term was used for “people wishing and praying that Batista would fall — but not doing much to act on it,” according to the Times.

Rafael eventually went on to become a minister and called himself Pastor Cruz. While he’s not affiliated with any church, he became a sought-out speaker and Tea Party celebrity.

Cruz's family moved to Houston in 1974, where he attended high school and started expressing an interest in law and politics. 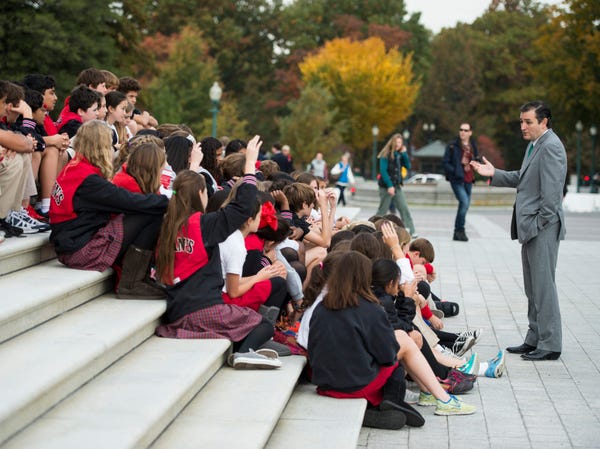 Cruz’s parents had separated at the time but reconciled shortly after. They eventually got a divorce in 1997 after Cruz finished law school but would still make appearances together at some public events.

Cruz was an ambitious, high-achieving, and politically-minded student in his early teens. But even though he was top of his class, he also had a desire to be popular.

In his book, he wrote: “Midway through junior high school, I decided that I’d had enough of being the unpopular nerd. I remember sitting up one night asking a friend why I wasn’t one of the popular kids. I ended up staying up most of that night thinking about it. ‘Okay, well, what is it that the popular kids do? I will consciously emulate that,'” the Guardian reported.

When he was in his early teens, Cruz's parents enrolled him in an after-school program called the Free Enterprise Institute that taught students free-market philosophies of economists such as Milton Friedman and Friedrich Hayek. 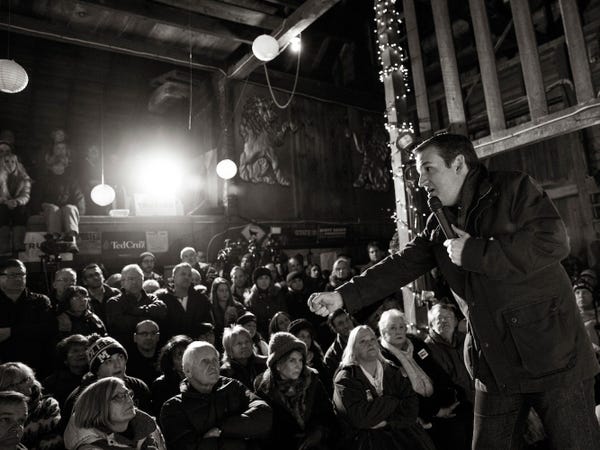 The club sparked his interest in debate, and it was here where he also developed his strong oratory skills. 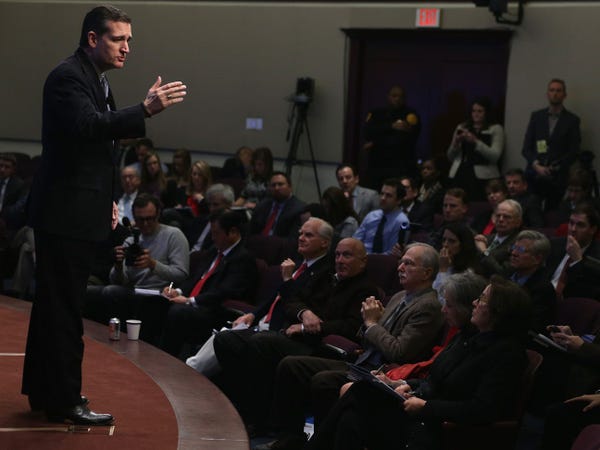 “Ted was just an amazing speaker at fourteen, by far the most impressive student we ever had,” a former teacher at the after-school program told The New Yorker.

“Ted was just an ideal student because he just absorbed everything, and he came from a conservative family in the first place,” he added.

As a senior in high school, Cruz had already sketched out a five-part plan for his life: go to Princeton, attend Harvard Law, become a lawyer, run for office — and eventually, win the US presidency.

Cruz articulated his towering ambitions in a video that was apparently filmed in 1988 when he was a senior at the Second Baptist School in Houston.

“Aspirations? Is that like sweat on my butt?” he jokes in the video. “Well, my aspiration is to, I don’t know, be in a teen tit film like that guy who played Horatio — you know, he was in Malibu Bikini Beach shop? Well, other than that, take over the world. World domination. Yeah, rule everything. Rich, powerful, that sort of stuff.”

“He was very well-liked by the teachers and his classmates and was generally considered a prodigy,” John Fuex, a former student at the school, told the Guardian.

Over the years, Cruz started formulating his political outlook — one that has barely wavered since. The Senator denies human-made climate change, supports free trade, is pro-life, rejects marriage equality, and is in favor of the death penalty. 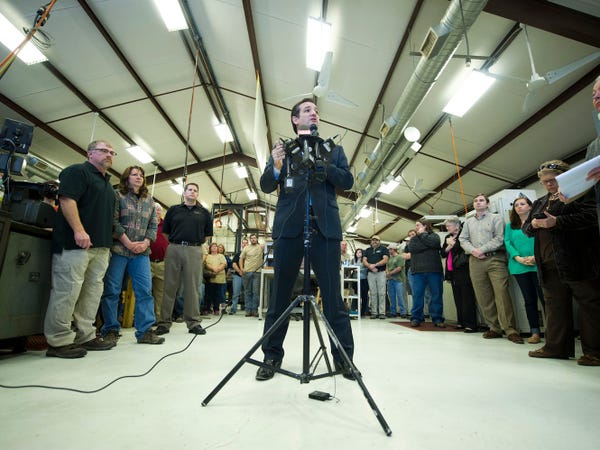 In 2015, he stated that the allowance of same-sex marriage by the Supreme Court was the "very definition of tyranny." 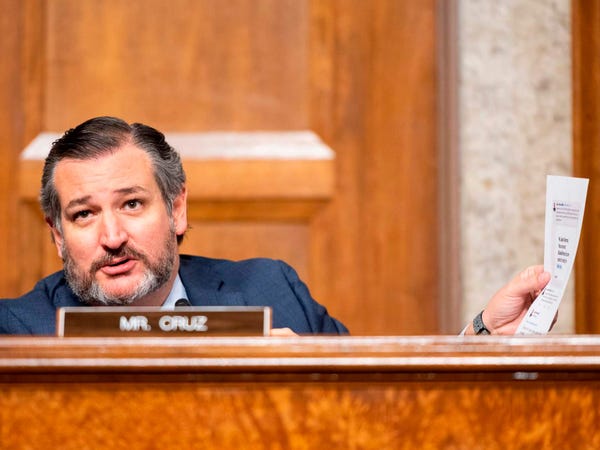 Aside from his father, Cruz has named Ronald Reagan as his hero. According to the New Yorker, Cruz had a three-panel painting of Reagan in his office. 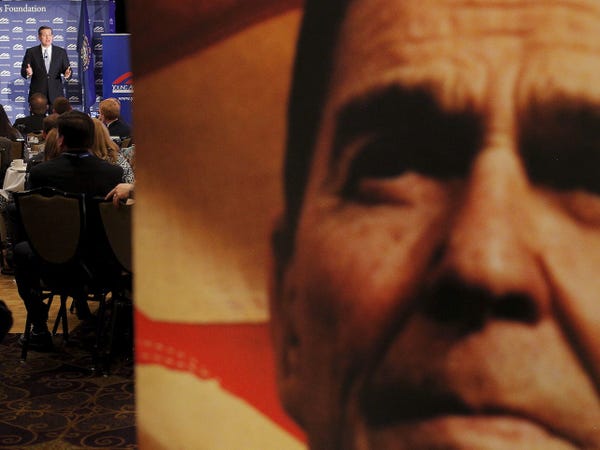 The senator also has a leather rectangle branded with the words “IT CAN BE DONE” — a replica of the sign that sat on Reagan’s desk in the Oval Office, according to GQ Magazine.

Cruz went on to Princeton where he graduated top of his class in 1992. During his time at the Ivy League school, Cruz made a name for himself as a national debating prodigy. 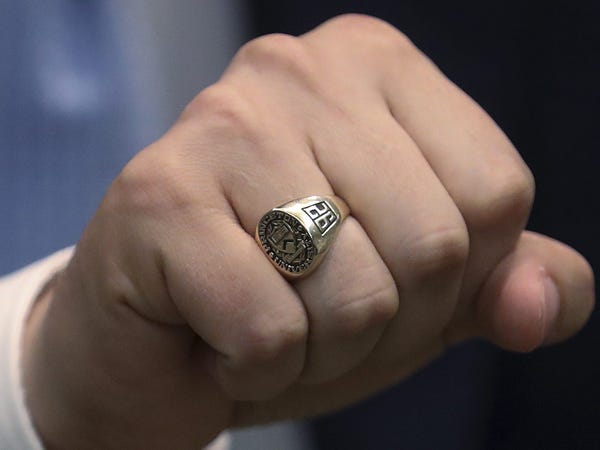 In 1992, he was named National Speaker of the Year and, with his debate partner David Panton, Team of the Year by the American Parliamentary Debate Association.

He then attended Harvard Law School a few years after Barack Obama. His criminal law professor, Alan Derschowitz, said of him at the time: "Cruz was off-the-charts brilliant." 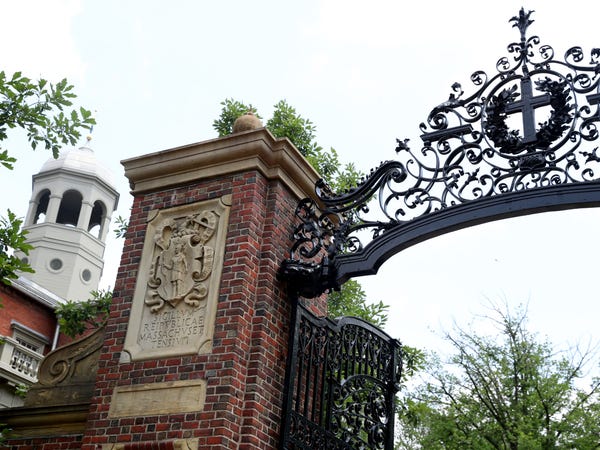 Cruz went on to work as a policy advisor in the George W. Bush Presidential campaign in 1999. This was also where he met his wife, Heidi, who was also working on the campaign while taking a break from Harvard Business School. 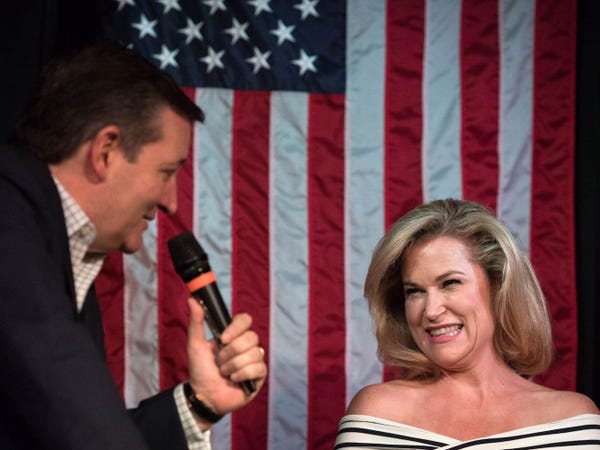 “The best part of the campaign was I met my wife. We were one of eight marriages that came out of the campaign, so I tell young people, ‘If you want to meet your spouse, go join a political campaign,'” Cruz told the New Yorker in 2014.

The two hit it off quickly and got married four months later. They would go on to have two daughters, Caroline and Catherine, who are now 12 and 10 years old respectively. 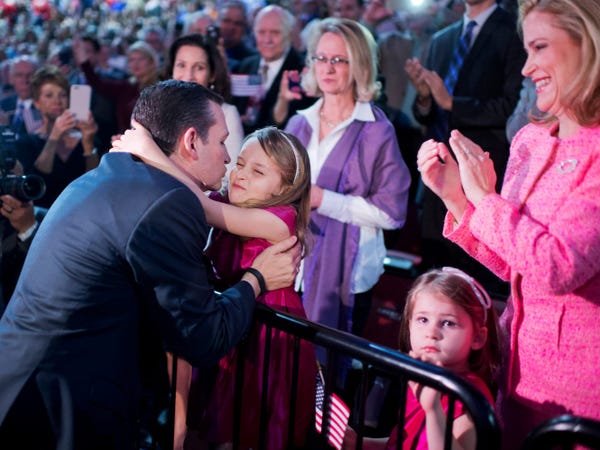 Cruz famously insisted they play “A Whole New World” from the popular Disney movie “Aladdin” at the end of their wedding ceremony even though Heidi was strongly opposed to it.

After getting married, they both worked in the Bush administration, with Heidi in the US Treasury Department and Ted at the Federal Trade Commission.

But Cruz wasn't satisfied with his career in Washington, so he accepted a job as Texas' solicitor general in 2003. His job brought him to Austin, so Cruz had to carry on a long-distance marriage for two years. 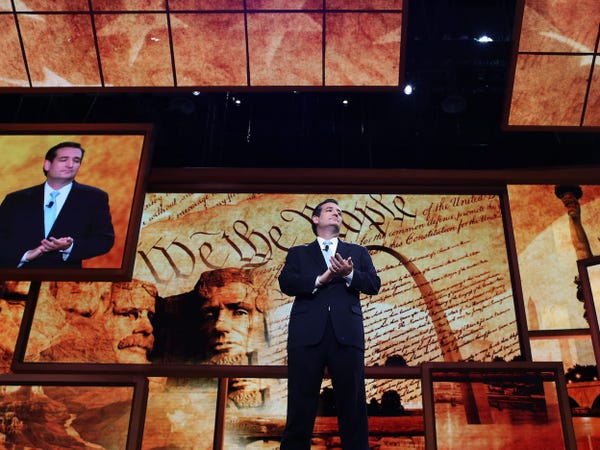 Long-distance was not easy for the couple, so Heidi eventually left her dream job in DC as an aide to Condoleezza Rice on the National Security Council to join him in Texas.

Heidi revealed in an Atlantic piece that she had an emotional breakdown one night in 2005 over the move to Texas.

She said she became so overwhelmed by her unhappiness that she broke down and sat on an expressway until a police officer found her and brought her to the station.

“It was a challenging time,” Ted remembered. “Because she was struggling with having given up a professional post that was very meaningful to her.”

Cruz worked as solicitor general until 2008 and then worked in a private law firm in Houston.

During his time as solicitor general, Cruz started wearing his famous black ostrich-skin cowboy boots, which he called his "argument boots." 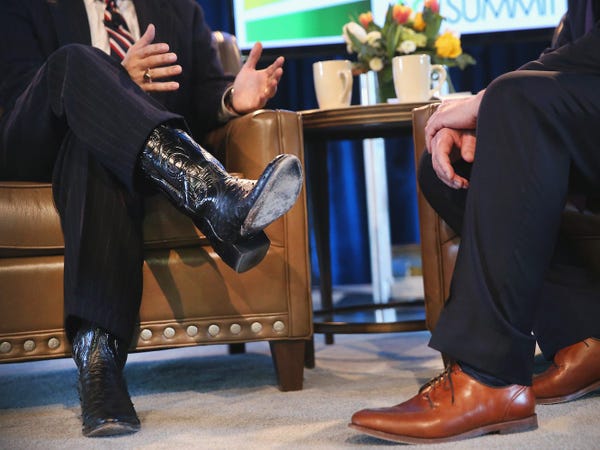 “When I was Texas solicitor general, I did every argument in these boots,” he told GQ in 2013. “The one court that I was not willing to wear them in was the US Supreme Court, and it was because my former boss and dear friend William Rehnquist was still chief justice. He and I were very close—he was a wonderful man—but he was very much a stickler for attire.”

After Rehnquist passed away, Cruz went on to wear the boots in the Supreme Court.

When a Senate seat opened up in the 2012 election, Cruz decided to go for it. Calling himself a "constitutional conservative, Cruz was backed by the Republican Tea Party movement. 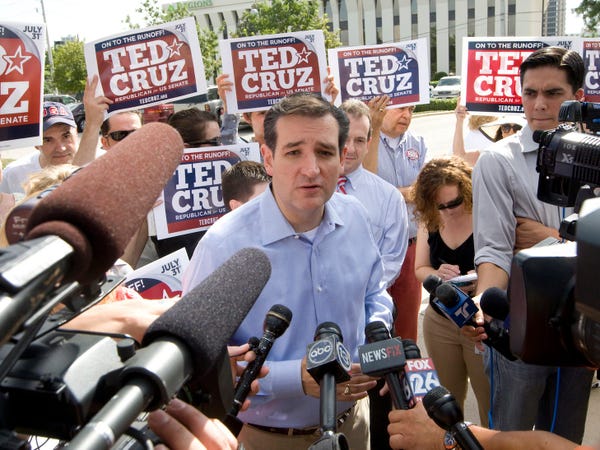 One year later, he was elected to the US Senate and became the first Hispanic American from Texas to do so. 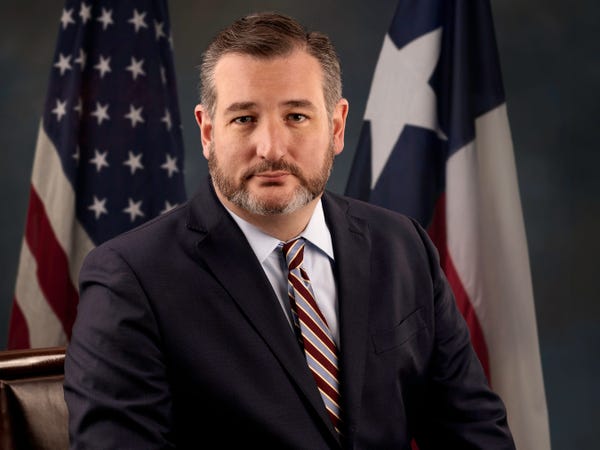 But Cruz stirred up debate upon his arrival in Washington. Several months after his appointment, he was called "Wacko bird" by the late Sen. John M Cain. He later embraced the name. 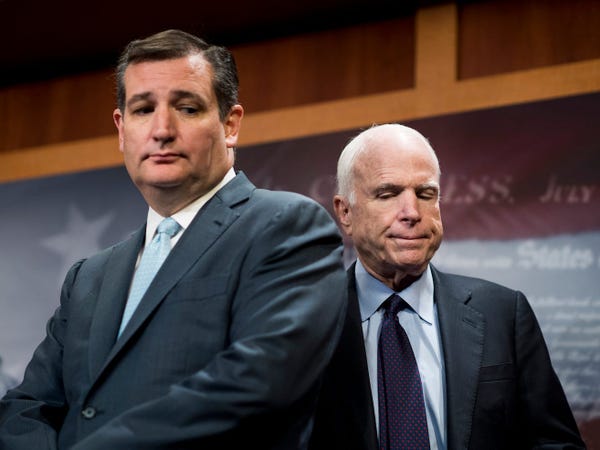 Cruz first achieved national recognition in September 2013, when he staged a 21-hour talking marathon on the Senate floor against the Affordable Care Act, a move that eventually led to the government shutdown.

In the best-known part of the speech, he read Dr. Seuss’s “Green Eggs and Ham” as a bedtime story to his two young daughters watching in Houston. Heidi suggested he read the book.

In his speech, he repeated an analogy between the “oppression” of Obamacare and the oppression that his father, Rafael, faced as a young man in Cuba.

Cruz announced he was running for president of the United States in the 2016 election. He ended up placing second behind Former President Donald Trump in the Republican primary. 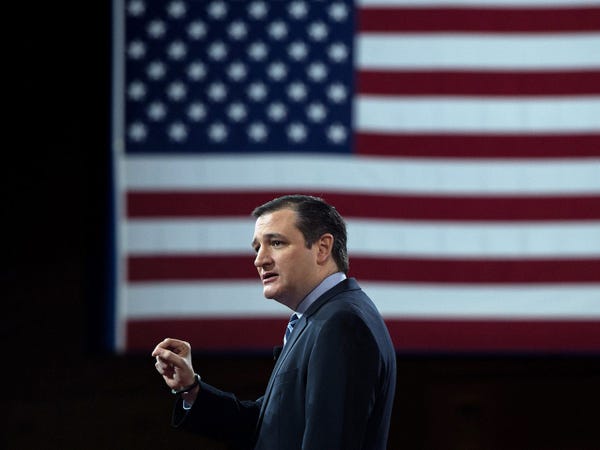 The political feud between President Donald Trump and Sen. Ted Cruz of Texas during the 2016 election was extremely bitter. The two had no problems attacking each other's wives, citizenship, and integrity. 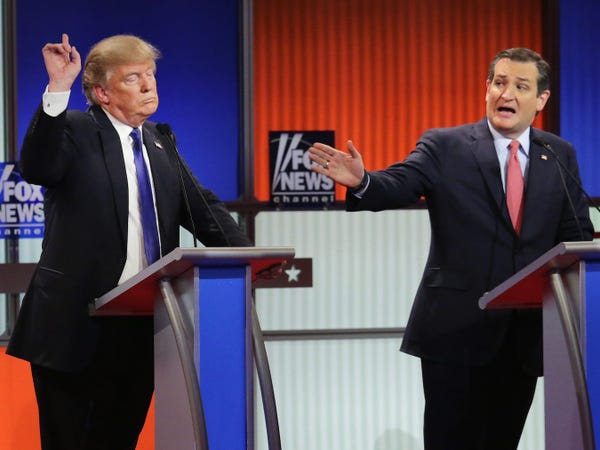 At one point, they even threatened to sue, accusing each other of lying and cheating for various reasons. It was during this time that Trump also gave Cruz the notorious nickname “lyin’ Ted.”

Trump famously tweeted out a side-by-side photo of Heidi and his wife Melania to attack Heidi’s appearance and accused Ted’s father of being involved in the assassination of former President John F. Kennedy.

“I don’t get angry often,” Cruz said after Trump tweeted the photos. “But you mess with my wife, you mess with my kids, that will do it every time. Donald Trump, you’re a sniveling coward. Leave Heidi the hell alone.”

Cruz finally came around to make an endorsement shortly before the 2016 election. The senator became an outspoken Trump supporter and the two worked together on Republican legislation. 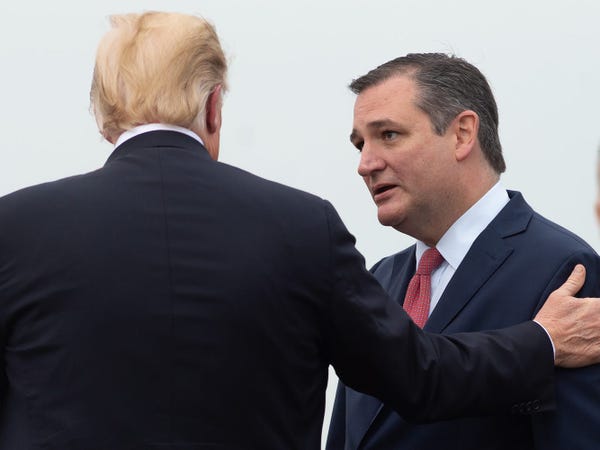 In 2018, Trump decided that Cruz was no longer “lyin’ Ted” and called him “Beautiful Ted.” 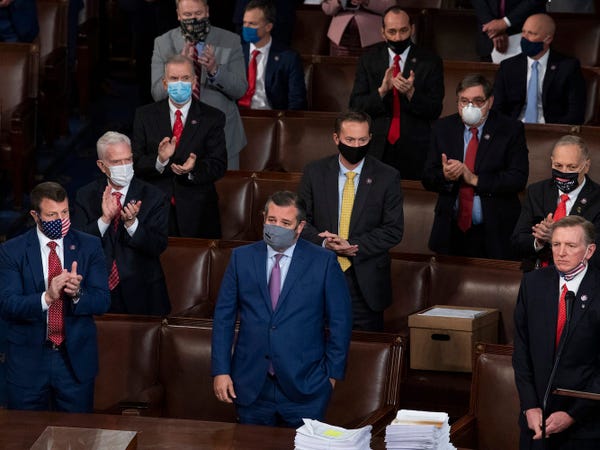 After the January 6 insurrection, many lawmakers, including Alexandria Ocasio-Cortez, condemned him and argued he bore responsibility for the riot and the deaths it caused. 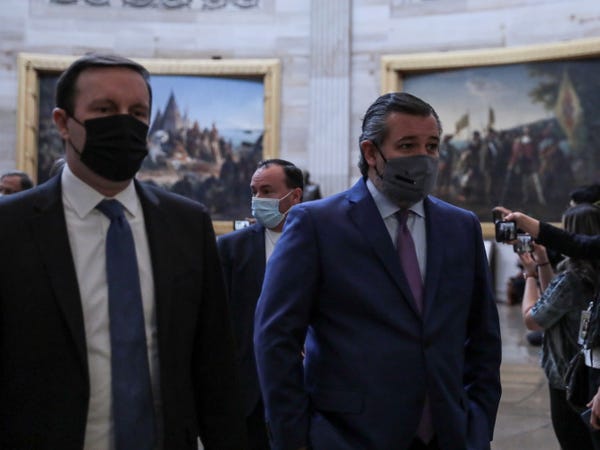 Cruz faced a storm of controversy when he flew to Cancún, Mexico, with his wife and daughters amid an unprecedented winter weather catastrophe and pandemic. 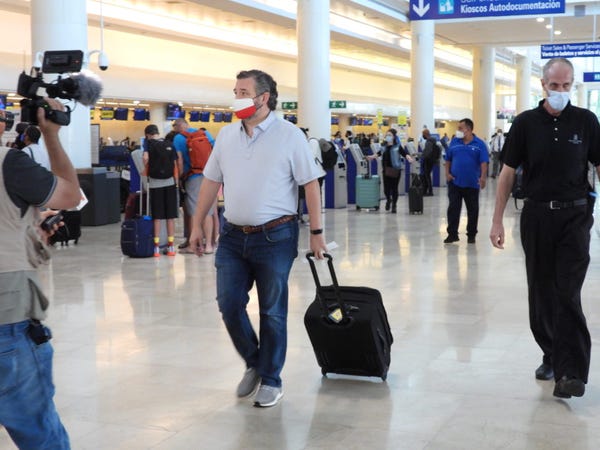 Critics ripped into Cruz on social media after news of his trip made headlines around the world.

Many recalled the “Lyin’ Ted,” nickname that former president Donald Trump used for Cruz and re-tooled it to highlight the blunder,  naming him “Flyin’ Ted.”

Cruz has been facing mounting pressure to resign. According to a YouGov poll this week, the senator's approval rating among Republicans has dropped by more than 20 percent. 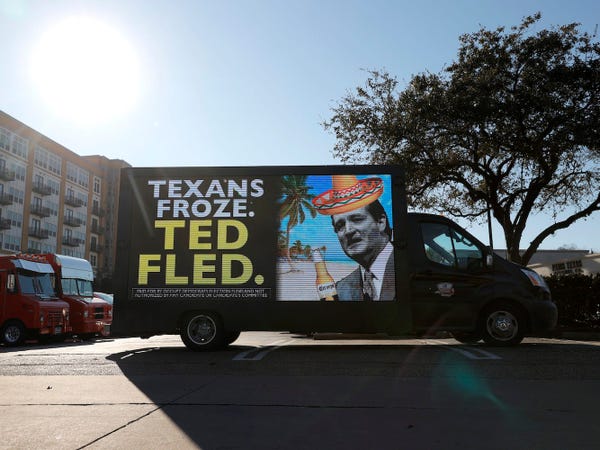 ‘Money makes money’: Jeff Bezos is getting richer during the pandemic