Most voters continue to believe coronavirus is at least somewhat under control, as support for mandates declines and confidence in the vaccine also falls.

Fifty-eight percent of voters believe the coronavirus vaccine is safe and effective, down from 65 percent in September.  That 7-point shift comes from decreases across the political spectrum — down 7 points among both Democrats and independents and 5 points among Republicans. 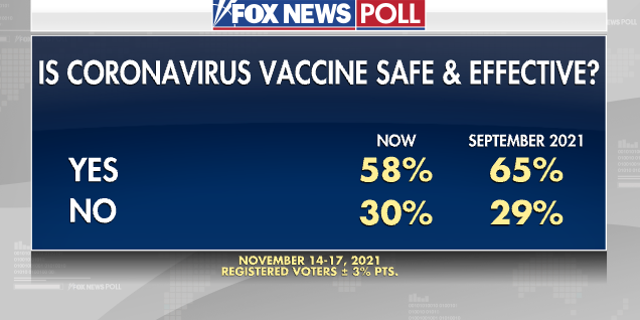 Still, far more Democrats (76 percent) than independents (49 percent) or Republicans (45 percent) have faith in the shot.

Views are similar on taking new pills designed to reduce hospitalization and death of COVID patients.  Fifty-six percent of voters overall would take it, including more Democrats (67 percent) than independents or Republicans (49 percent each).  Two voters in 10 won’t take the new pills, while one-quarter are unsure or say it’s too soon to say.

Compared to the vaccine in general, a smaller 45 percent consider the vaccine safe for children ages 5 to 11.  Thirty-eight percent say it is unsafe and 16 percent are unsure.

Voters are split 48-46 percent over schools requiring students to be vaccinated.  This is the first time the Fox News survey asked about vaccinating younger children and requiring it of students.

Fifty-five percent favor vaccine mandates when it comes to teachers, down from 61 percent in September.

There’s a similar decline on President Joe Biden’s plan to mandate vaccines or testing for staff of businesses with 100+ employees.  Some 49 percent favor it, down from 56 percent two months ago.  In response to a court order, the Occupational Safety and Health Administration suspended enforcement of Biden’s mandate Wednesday. 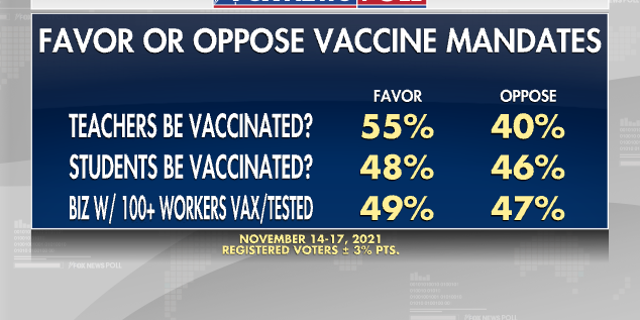 A majority isn’t worried about the pandemic keeping them from seeing family and friends during the holidays:  43 percent are concerned vs. 56 percent not concerned.  More, about two-thirds, are worried their gift-giving will be hurt by inflation (64 percent concerned) and supply chain issues (62 percent concerned). 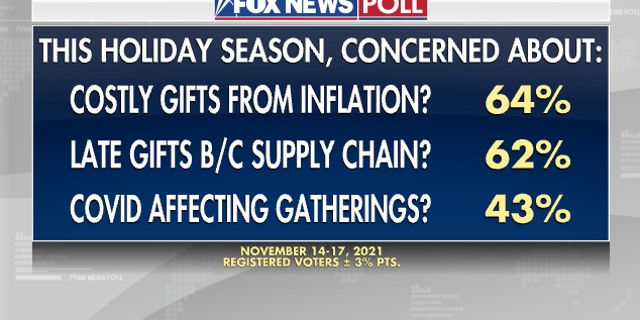 Biden gets his best marks for handling the pandemic, although they aren’t nearly as impressive as they once were.  The new survey finds he’s underwater by one point: 48 percent approve and 49 percent disapprove.  Six months ago, his coronavirus ratings were in positive territory by 30 points (64-34 percent in May and June 2021).

Some 16 percent of Republicans approve of Biden on coronavirus — down from 37 percent in May.  Even so, this is the best rating he gets from the GOP on any issue tested.

The pandemic is also Biden’s best issue among Democrats: 84 percent approve, down from 90 percent six months ago.

Fifty-one percent of parents believe the COVID vaccine is safe and effective.  That’s down from 56 percent in September.

However, by a 7-point margin, they don’t think it’s safe to give the shot to children ages 5 to 11 (38-45 percent).  There’s more resistance, by 11 points, among parents with children in that age group. 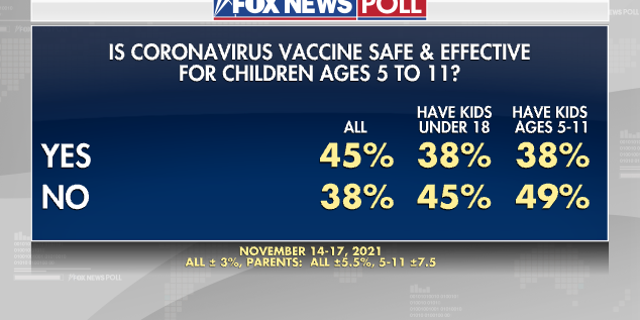 Parents want the vaccine required for teachers (55 favor-41 oppose), but oppose it for students (43 favor-51 oppose).

Conducted November 14-17, 2021 under the joint direction of Beacon Research (D) and Shaw & Company Research (R), this Fox News Poll includes interviews with 1,003 registered voters nationwide who were randomly selected from a national voter file and spoke with live interviewers on both landlines and cellphones. The total sample has a margin of sampling error of plus or minus three percentage points.

Fortnite players FUMING as connectivity issues prevent them from logging in