ORLANDO — Former President Donald Trump cost Republicans the House, the White House and, ultimately, even the Senate in his single term as president, but that first-time-in-a-century achievement does not seem to have left an impression with his party’s most fervent activists.

“He was the greatest president of our lifetime,” said Ron Rostorfer, 78 and from the Fort Lauderdale area, who said he was even better than former President Ronald Reagan. “I don’t think there’s anyone who can compare to him.”

Rene Campbell, 50 and from Bergen County, New Jersey, thinks Trump was even better than that. “The greatest president ever,” she said, through an “America First” mask. “Hands down … There’s so much that he did for our country.”

At the annual Conservative Political Action Conference gathering — in Florida this year, because of its lax coronavirus restrictions — the most recent former president, despite his resounding loss, is still treated like a winner.

“Pretty much the same thing that’s happened with the Republican Party. They have gravitated toward Trump with everything,” said Al Cardenas, a former chair of the American Conservative Union, the group that has staged the conference for nearly five decades. 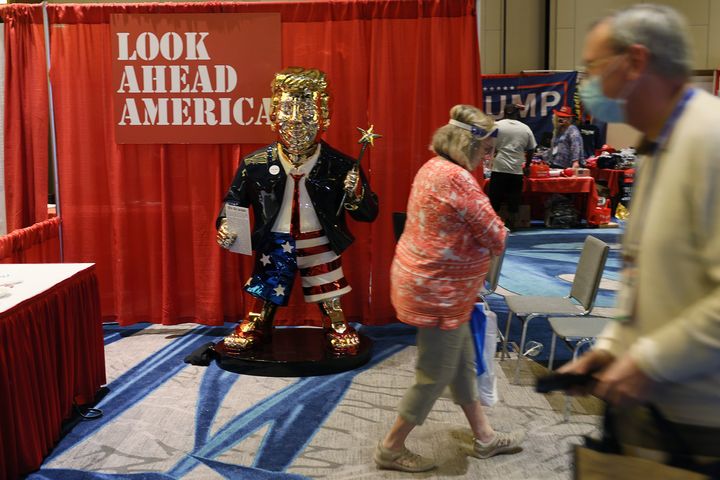 Not that many years ago, he added, conservatism as defined by the ACU meant believing in smaller government, lower taxes and personal responsibility. The new definition seems to be believing in — and literally believing the frequently false words of — Trump, who is scheduled to deliver the event’s keynote and closing speech on Sunday afternoon.

The ring kissing has been in high gear this weekend, even from Republicans who are considering running for the GOP nomination themselves — perhaps against Trump — in 2024.

Florida Sen. Rick Scott said he was proud of Trump for standing up to the establishment. “It was high time for someone to go to Washington and say ‘no.’ And I’m glad that President Trump had the guts to do it.”

And Missouri Sen. Josh Hawley won some of the most raucous applause of Friday recounting how he had pushed Trump’s so-called big lie that he had actually won the election, even after a violent mob of his supporters broke into the Capitol calling for lawmakers’ deaths. “On Jan. 6, I objected to the Electoral College certification,” Hawley boasted.

The ACU was born out of the regrouping conservatives undertook following Republican Barry Goldwater’s drubbing in 1964. Its annual conference began a decade later and featured Reagan, who was the favorite of conservatives even then. He won the first three presidential preference straw polls CPAC held, in 1976, 1980 and 1984.

But as he finished his second term and gave his blessing to his vice president, George H.W. Bush, to succeed him, CPAC had already began moving from the new center of the party as defined by Reagan toward its rightward fringe. Bush never won a CPAC straw poll, but New York state congressman Jack Kemp won the next three it held, in 1986, 1987 and 1993.

As years passed, emphasis on conservative principles like smaller government and more personal responsibility waned while the need to argue and fight with their perceived enemies took center stage. More and more panels and speakers lashed out at “political correctness” and campus free-speech battles.

The election of the nation’s first Black president in 2008, though, accelerated that shift, with the tone becoming increasing strident, and warnings of imminent disaster ever more dire.

“It was always GOP fringe, really the GOP base. It was always the activists,” said former Illinois Republican congressman Joe Walsh, who used to speak at the events before rejecting the party under Trump. “The difference is it was issues based. Now like the party itself, it’s all about Trump.” 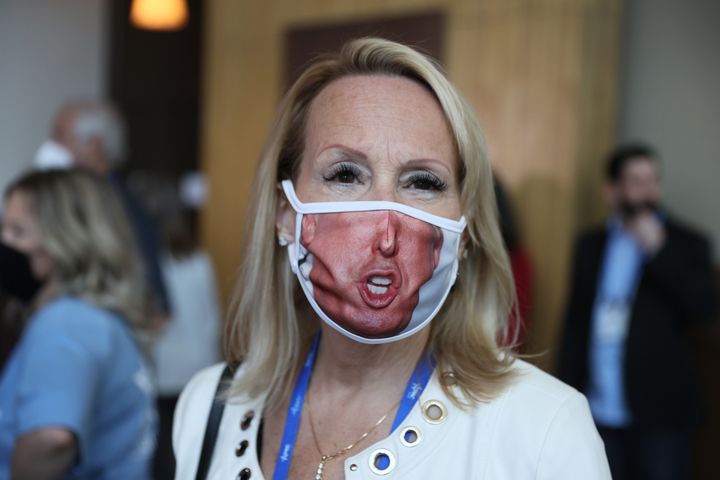 So much so that when a sculptor brought in a fiberglass depiction of a golden Trump, it became an instant hit in the exhibit hall at the Hyatt Regency, with Trump shirt-, Trump mask- and “Make America Great Again” hat-wearing attendees lining up for photographs — the golden calf warning from Exodus apparently unheeded in a conference that frequently touts the nation’s Judeo-Christian roots.

Of more practical effect for Republicans hoping to win the White House themselves is that Trump’s lingering on the stage has made it difficult, if not impossible, to break out for themselves.

Even the marquee speaking slot, the Reagan Dinner, held on the final night of the conference and typically reserved for a rising star or perceived favorite for the next nomination, is instead being split Saturday night among former Trump Cabinet member Ben Carson and former Arkansas governor and presidential candidate Mike Huckabee.

Almost entirely missing from the discussion in Orlando was Trump’s incitement of the deadly mob attack on the Capitol in his last-gasp effort to overturn the election he had lost by 7 million votes.

Those actions led to non-Republican America to dislike Trump even more than they had already, but at CPAC, both speakers and attendees say they see no correlation between Trump’s words and deeds to encourage the Jan. 6 insurrection and the actual violence that ensued.

“I don’t think he’s responsible,” said Rafael Garciano Baldez Neves, a 36-year-old Trump supporter from Orlando. “I don’t think he was being literal. He was using figurative language that’s used in politics all the time.”

“The reason people stormed the Capitol is that they felt hopeless, because of a rigged election,” T.W. Shannon, a Black Republican banker from Oklahoma, said from the main stage on Friday, repeating Trump’s “big lie” that he had not really lost the November election.

Nevertheless, Trump’s Republican critics — none made themselves obvious at CPAC — argue that Trump’s role in the Capitol attack will continue to dog him, in both criminal and civil legal problems. On top of that is a criminal tax and mortgage fraud investigation by state prosecutors in New York City. The cumulative effect, they hope, will leave him unable to mount a serious presidential run in 2024.

Louisiana Republican Sen. Bill Cassidy, who was one of only seven Republican senators who voted to convict Trump following his impeachment for inciting the insurrection, expressed that view when he was asked whether Trump should, as he is considering, run again in 2024. “I don’t’ think he’s going to be our presidential nominee, so I don’t think that will be an issue which I have to face,” he told Fox Business on Friday.

That strategy of hoping that Trump will falter on his own, of course, mirrors the hopes of the other GOP hopefuls in 2016, who either assumed Trump would fade because of his frequent missteps and obvious record as a dishonest con man or would easily be dispatched once the race was down to him and one or two other contenders.

“MAGA is not transferable to another candidate. MAGA is like K-Pop fans,” he said.

Republicans who want to move past Trump will have to take control of the party away from him — a task that none of the others thought to be considering a 2024 run seem willing to do, Cardenas said.

“His politics of fear continue to be working,” he said, adding that it’s difficult to know how long Trump can continue making that work. “Without fear, Donald Trump is done.”

Pension tax relief: Many unaware that they could claim relief on their contributions

Robert Johnson: Companies will take hiring Black workers seriously when not doing so hurts their stock