On Tuesday, the Fortescue founder hit back at a statement issued earlier this week by Huon’s chair, Neil Kearney, who labelled Mr Forrest’s recent statements about the company as “noise”. Huon is currently in the midst of a $500 million takeover offer from Brazilian meat processing giant JBS. 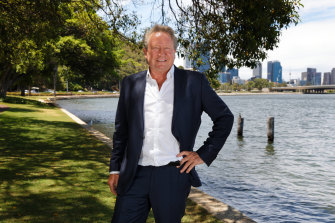 Andrew Forrest has said his initial bid for salmon farmer Huon was low for a reason.Credit:Trevor Collens

Mr Kearney also revealed that Mr Forrest’s investment vehicle Tattarang, which currently owns 18.5 per cent of Huon, had made a bid for the salmon farmer earlier this year which was far below the $3.85 a share offer currently on the table from JBS.

Tattarang was given the opportunity to submit a final offer for the business but did not do so, a move Mr Forrest said was due to “serious environmental concerns” factored into the company’s initial price.

“Tattarang had factored into its offer price several key environmental improvements that it strongly believes are absolutely necessary for sustainable and responsible salmon production,” he said. “The first of these is an end to salmon farming in Tasmania’s Macquarie Harbour.”

Tasmanian residents have been fighting against the location of salmon farms in the Macquarie Harbour for years. Between 2017-18, around 1.35 million salmon died from disease and oxygen depletion due to severe overstocking in the harbour.

“Tattarang wanted to remove the pens from Macquarie Harbour where they are environmentally destructive, and have caused deep upset to the local community,” Mr Forrest said. “Our offer was predicated on fixing the environment, focusing on production in deep water high current environments, or on land.”

Mr Forrest said Tattarang initially bought its 7 per cent stake in Huon to pressure management to move the pens.

Over the past week, Mr Forrest has repeatedly called on JBS to commit to higher standards of animal welfare practices, a battle he said he would continue to fight, dismissing Mr Kearney’s statement that his comments were just noise.

He again called for the Foreign Investment Review Board (FIRB) to intervene and block the acquisition, citing JBS’ history of corruption and animal welfare issues. It’s thought Tattarang, and Canadian company Cooke, could be waiting for FIRB to block the deal before making their own bid.

Peter Bender, Huon’s founder and chief executive, told staff on Tuesday in a letter seen by The Age and The Sydney Morning Herald that there had been “immense” scrutiny of the company in recent weeks, with many things said that were “not based on facts”.

Mr Bender touted JBS’ “scale and financial muscle” as a key benefit of its potential ownership of Huon, saying the company could help significantly grow the farmer.

“With financial backing for JBS, Huon could go to the next level and take advantage of opportunities to grow,” Mr Bender said. “That’s something we haven’t been able to do in recent times at Huon, but JBS has the runs on the board on this front.”

Mr Bender also reinforced that JBS did not want to undermine Huon’s reputation but “enhance it”, and that the company was committed to upholding the highest standards for sustainable farming practices.