A 10,000 sq m office/warehouse previously used by logistics giant Linfox as a distribution facility has sold for $12.5 million in an off-market transaction. The 1.7 hectare site was purchased by a local investor developer Peter Fountas of Virtus Property Group who will refurbish the existing buildings to lease out, said Crabtrees' Chris McKenzie and Megan Miles who negotiated the deal.

Food and beverage-tenanted retail properties are delivering strong sales results for vendors. Fitzroys' Chris Kombi, Terence Yeh and Lewis Waddell negotiated the sale of 375 and 375A Brunswick Street for $2,038,000 to an interstate buyer. The two-storey shop and 220 sq m dwelling occupy a 148 sq m corner site with a frontage to Brunswick and Rose streets. The property is fully leased to two tenants and returns a combined rent of $105,370 per annum.

Part of the Altona Village shopping strip, a corner shop sold for $2.24 million on a 5.3 per cent yield in a deal brokered by Teska Carson's George Takis and Fergus Evans. The two-storey building at 66-72 Railway Street and 89 Pier Street has four shop fronts and five first-floor office spaces.

"The property is situated within a popular strip with corner exposure and offered rental upside as well as excellent growth prospects," Mr Takis said. It sold with several leases returning annual rental of $138,000 per annum. 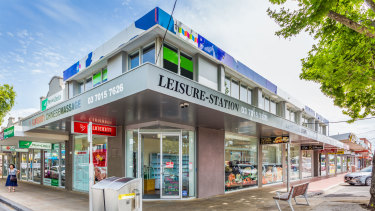 A mid-size warehouse with offices at 14 Phoenix Court sold prior to auction for $1.2 million. Set on 1143 sq m of land, the 747 sq m clear span, high clearance warehouse had a separate office and staff facilities. Jill Duggan from Nichols Crowder said the construction of the nearby Mordialloc Bypass due for completion next year was bringing a lot of attention to the region.

A building leased to Oliver Jar Cafe at 168-170 Rathdowne Street has sold through CBRE's Rorey James, Nic Hage and JJ Heng for $1.35 million. Four bidders vied for the property before it sold under the hammer at auction. The buyer was initially looking for residential investments but switched to commercial property, they said.

On the back of recent increases in land prices, a block at 35 Apex Drive sold for $829,280 through Colliers International's Charlie Woodley, Oscar Dixon and Anthony Ongarello. The 2272 sq m site is in a new industrial estate in The Crossing.

The home of successful coffee roaster and cafe operator Code Black Coffee has sold for $2,655,000. CBRE's Julian White, Dylan Kilner, Nic Hage and JJ Heng steered the sale of the 119 Howard Street property, with the price representing a very tight 3.5 per cent return. "This is another example of the current demand for passive, long-term investments," Mr White said. It sold with a 10-year lease to Code Black.

Short-term leases are often shunned by landlords, but Sector Property Group has signed up a tenant for its warehouse site at 26-28 Hargreaves Street. Bought by Sector in 2019, the site will house hail damaged cars in the short term. "Within hours after storm damage we are inundated with requests for large spaces for short-term leases," Andrew Chrapot and Harry Larwill from Colliers International said. Sector's David Loakes said the site was vacant and available. Colliers's leased it to Wizard Automotive Systems Pty Ltd for $35,500 plus GST per month for 6 months.

A flurry of deals in the Suleman Group-owned tower at 470 Collins Street will see Lextech move into 87.7 sq m on Level 1, while on Level 7, Giorgianni & Liang Lawyers will occupy 111.7 sq m. Australian Financial Group (85.7sqm) and Collabera Technologies (139.1sqm) have each taken space on Level 10, according to Colliers International's Alissa Woods, Milly Stockdale and Zak Seccull. Rents were struck between $390-$400 net per sq m.

Australasian Movement Disorder and Pain Surgery are moving from Kew Junction to 60 Cotham Road in a deal negotiated by Prowse Burns Commercial's Philip Prowse. The group leased the property on a 5+5 year at a commencing rent of $155,000 net plus GST.

Stone Italiana has expanded into 489 Church Street. The marble retailer leased the 85 sq m shop for $63,000 per annum plus GST plus outgoings, just under $750 per sq m. The offmarket deal was negotiated by Josh McMullin from Morley Commercial.

SpeedPro Industries will move into 74-76 Logis Boulevard on a long-term lease. Cameron's Angus Clark and CBRE's Lachlan Ferguson negotiated the lease for the large 2533 sq m office/warehouse in the Logis Eco Estate. The building has a dual-level corporate office, two gated crossovers and a large side canopy, and achieved an annual net rental of $233,700.

Colliers International has appointed valuer Trent Weir to its retail division as the national director to the retail valuations team.

Op-ed: Joe Biden has a Latino voter problem. Here's how he can fix it

2 Iranian Navy ships are heading to the Americas, posing a potential provocation to the US