Former Disney global chief executive Bob Iger has defended his legacy atop the House of Mouse, during which he launched the entertainment conglomerate’s streaming service into a market that has become increasingly congested with offerings from major media companies.

When Netflix was the only major player in the market and cheap interest rates allowed it to borrow extensively to produce seemingly endless series and movies, it was rewarded with a huge share price. But since then Disney, HBO and a host of other US entertainment giants have launched streaming services, many of which are also available in Australia. 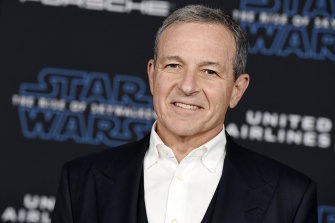 That competition, along with rising inflation and interest rates, has prompted the market to reassess the value of streaming firms. Disney is down 60 per cent this year while Netflix has fallen almost 70 per cent.

Iger, who worked at Disney for 47 years and was CEO from 2005 to 2020, said business was already being disrupted by companies such as Apple, Amazon and Netflix when it launched its streaming service in late 2019.

“We were being disrupted by others, so why not disrupt ourselves?” Iger said at the Macquarie Technology Summit on Tuesday.

Iger said the move to streaming had been expensive because Disney had to build a new technology platform and cancel lucrative licensing agreements with other streaming firms, which eventually included Stan in Australia. Stan is owned by Nine, which also owns The Sydney Morning Herald and The Age. Stan shares are down a third this year on the ASX.

“We had to tell Wall Street by the way, basically, don’t worry, we’re going to reduce our profitability by a couple of billion dollars, but this is what we’re doing. We were actually surprised pleasantly that they applauded the move. They believed that if anyone had the ability to do it, it was us.”

Iger insisted the streaming market was not oversaturated, arguing it had provided consumers with more choice in how they watched and paid for TV shows and movies. “We’ve seen tremendous growth very fast. We’re now seeing some of that growth, basically slowing a bit, but some of the issues that some of these businesses face are rising to the surface… but I think [streaming] is here to stay.”

The Macquarie summit comes after a sharp fall in technology stocks this year, as rising interest rates have prompted investors to cut their valuations of “growth” businesses, especially those that are not yet profitable.

Macquarie chief executive Shemara Wikramanayake acknowledged this year’s correction in tech valuations after the boom of 2021, but said the bank remained optimistic towards technology’s longer-term potential.

“Whilst the enthusiasm and specific circumstances that drove valuations to record heights were always set to lose some momentum, technology’s long term role in addressing societal challenges is undiminished,” Wikramanayake said.

“There’s little doubt that the digitisation of the global economy will continue, and based on previous experience, that the current period of disruption will give rise to new ideas and new businesses that underpin the next growth phase for the sector.”