London (CNN Business)Indigestion, stomach cramps and constipation are all signs of irritable bowel syndrome (IBS), a digestive condition estimated to affect one in 10 people worldwide.

There is no cure, although it can be managed with lifestyle and dietary changes. But discovering which foods trigger a bad reaction for individuals can be a long and painstaking process. It’s expensive too — a 2019 study of six European countries found that it cost healthcare systems between €937 ($1,087) and €2,108 ($2,445) per patient per year.
That’s why Irish engineers Aonghus Shortt and Peter Harte founded FoodMarble, a startup that has invented portable devices, measuring just 5 centimeters squared, which test the hydrogen levels in a person’s breath — a key signal for digestive disorders.

“Humans shouldn’t be producing hydrogen on the breath,” explains Harte. It happens when food that couldn’t be digested in the small intestine moves to the large intestine where bacteria breaks it down, in a process called fermentation. That process releases gases, such as hydrogen or methane, that can cause pain or bloating. 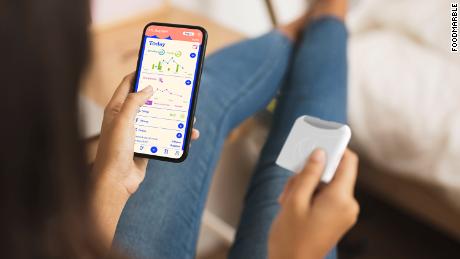 FoodMarble’s AIRE device, which launched in 2018, allows users to test for hydrogen after meals, giving them real-time feedback on what food is bad for their body. Readings are transmitted via Bluetooth to the FoodMarble app, where users can log what they eat, and over a course of weeks spot the ingredients that trigger symptoms.

Hydrogen breath tests have long been a method for diagnosing digestive conditions like lactose intolerance and more recently small intestinal bacterial overgrowth (SIBO), says Harte. But he adds that the technology has not been widely accessible or convenient — often requiring multiple trips to the hospital for testing.
“By miniaturizing this, our aim is to democratize the technology,” he says. “We’ve got this huge cohort of patients who just haven’t had a way to overcome these difficult conditions. Our device is easy to use and understand, it gives them hope.”
The global market for IBS treatments is also growing, expected to be worth more than $4 billion by 2028, up from $2 billion in 2020, according to a report by market research firm Research and Markets.
FoodMarble has sold 25,000 of its breath sensor devices and has just opened pre-orders for a new version that also measures methane levels. They are available worldwide and cost between $190 and $260. 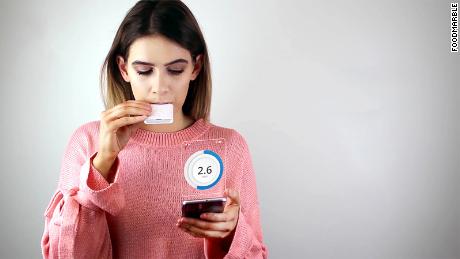 But the company, which has raised €5.5 million ($6 million) in funding, is also looking to enter the clinical market and its technology is currently undergoing trials at Johns Hopkins Medicine in the US to improve the diagnosis of SIBO. Dr. Pankaj Jay Pasricha, the professor leading the trial, says that so far, the device has outperformed other hydrogen breath test methods.
Dr. Tara Troy, a gastroenterologist who runs the Comprehensive Gastrointestinal Health clinic in Northbrook, Illinois, believes that a take-home, reusable device could be hugely beneficial to clinicians and patients alike. FoodMarble is the only company she’s heard of providing this — although there are a handful of others, like Vivante Health, offering a digital platform for monitoring gut health.
Doing breath tests in a clinical setting can be logistically challenging and manpower intensive, Troy tells CNN Business, requiring a medical assistant to take a breath sample every 15 minutes over a number of hours.
“The attraction of the FoodMarble device is that it’s not just a one-time analysis of the breath,” she says. “A person could use it multiple times to gather multiple data points on which to make better judgment calls and assessments about food sensitivities.”

Troy warns that hydrogen breath tests are not a foolproof method for diagnosing digestive problems and can sometimes produce false negatives and positives. It is important to complement them with other tests that can determine if a patient is suffering from more serious conditions such as celiac or Crohn’s disease.

But she says that they are hugely valuable in offering some sort of “objective criteria” for patients with IBS.
“I think it’s very empowering for these individuals to be able to figure things out on their own,” says Troy. The FoodMarble device “gives the patient that objective information that helps to confirm that it is a real issue … [and] it gives them the opportunity to experiment with dietary factors,” she adds.
Source: Read Full Article