Gutfeld on the media going easy on President Biden

The press quickly changed the rules once Trump left office; analysis on ‘The Five’

Lauren Wolfe, the former New York Times editor who was ousted following a viral pro-Biden tweet she made ahead of the president’s inauguration last week, has launched a newsletter in which she defended her social media activity.

“I’ve spent two decades in journalism or press freedom advocacy. Along the way, I reported some pretty difficult stories… People would always ask me: ‘How can you do these stories and not fall apart?’ I didn’t know. I just held it together,” Wolfe wrote in her Substack newsletter, appropriately titled “Chills.”

Wolfe explained that according to the Times, she was fired for “express[ing] emotion publicly on something I should not have”. However, she argued that she and her former colleagues are not “robots.”

NY TIMES EDITOR MOCKED FOR BIDEN FANFARE AS PRESIDENT-ELECT’S PLANE LANDS AT JOINT BASE ANDREWS: ‘I HAVE CHILLS’

“Most are smart, feeling people. But when I worked there, I felt like my whole body was in a shoe that was just a little too tight,” Wolfe wrote. “I needed to feel what I feel during these crazy, awful times, and I needed to express those feelings, sometimes in writing, because that’s what I do. When I feel, I write. When I am angry, I write. When I see injustice, I write.”

Wolfe promised that her newsletter will provide “stories that make your heart hurt, that may be hard to read, that will hopefully make you think and (yes) possibly chill you to the bone.” 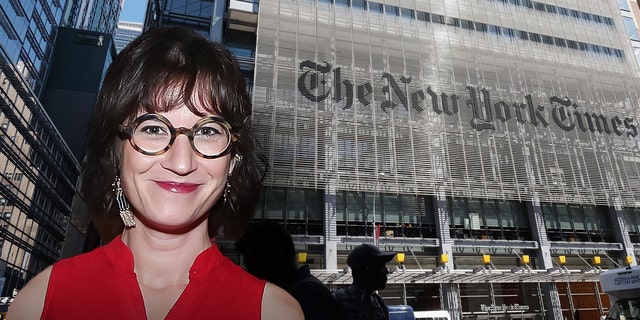 The Wolfe saga began Jan. 19 after she couldn’t resist tweeting out her reaction while watching CNN’s coverage of Biden’s plane landing on the tarmac.

“Biden landing at Joint Base Andrews now,” she wrote. “I have chills.”

She then knocked the Trump administration for apparently not providing a military plane to ferry Biden from Delaware.

“The pettiness of the Trump admin not sending a military plane to bring him to D.C. as is tradition is mortifying,” wrote Wolfe, who added, “Childish.” 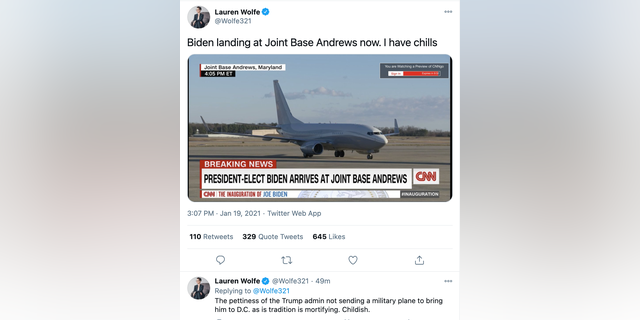 The Times editor was mocked by critics, many of them invoking former MSNBC host Chris Matthew’s infamous “thrill up the leg” remark about President Obama.

Wolfe later deleted her tweet knocking the Trump administration after she was fact-checked by critics who cited reports that the Biden team was offered a military plane but chose to fly private.

Vanity Fair reported earlier this week that Wolfe, who was a freelance editor for the paper, “had previously been cautioned about her social media behavior” according to a “senior” Times staffer.

In a statement to Vanity Fair, which was also given to Fox News, a Times spokesperson said, “There’s a lot of inaccurate information circulating on Twitter. For privacy reasons we don’t get into the details of personnel matters but we can say that we didn’t end someone’s employment over a single tweet. Out of respect for the individuals involved, we don’t plan to comment further.”