Google expanded its LA presence last year, repurposing a historic airplane hangar to create new office space, and the results are nothing short of stunning.

The hangar, which once held the famed Spruce Goose plane, as it was derisively called, has been out of use for years. The Spruce Goose was the largest wooden plane ever built, due to wartime shortages during World War II. It flew just once, for under a minute, in 1947. It was once owned by filmmaker and pilot Howard Hughes, who also helped design the plane.

Now, the hangar where the Spruce Goose was kept for over 30 years has a second life as Google's LA office. Google worked with sustainable architecture firm ZGF to create a design that feels new and classic all at once.

The restored hangar won't be getting much use in the next year, though, as Google asked employees to work from home until July 2021. Take a look:

The hangar that was once home to the Spruce Goose had been mostly unoccupied until Google took over and renovated the space. 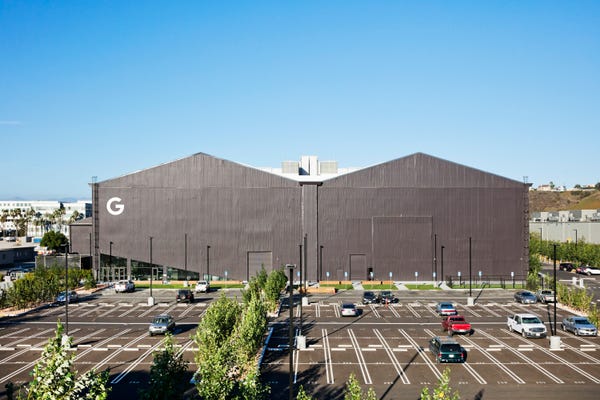 In 2018, Google completed a total redesign of the 750-foot-long building. 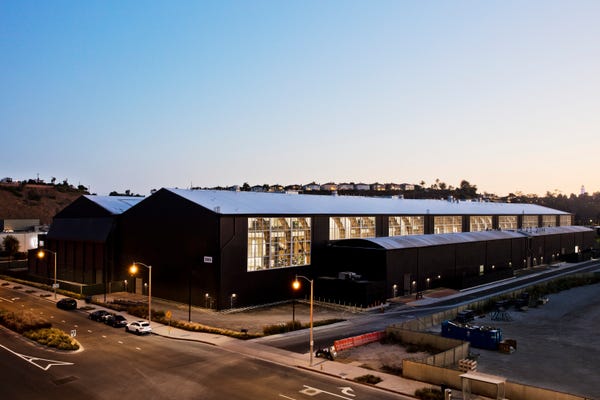 It was once used as a soundstage for "Titanic" and "Avatar." 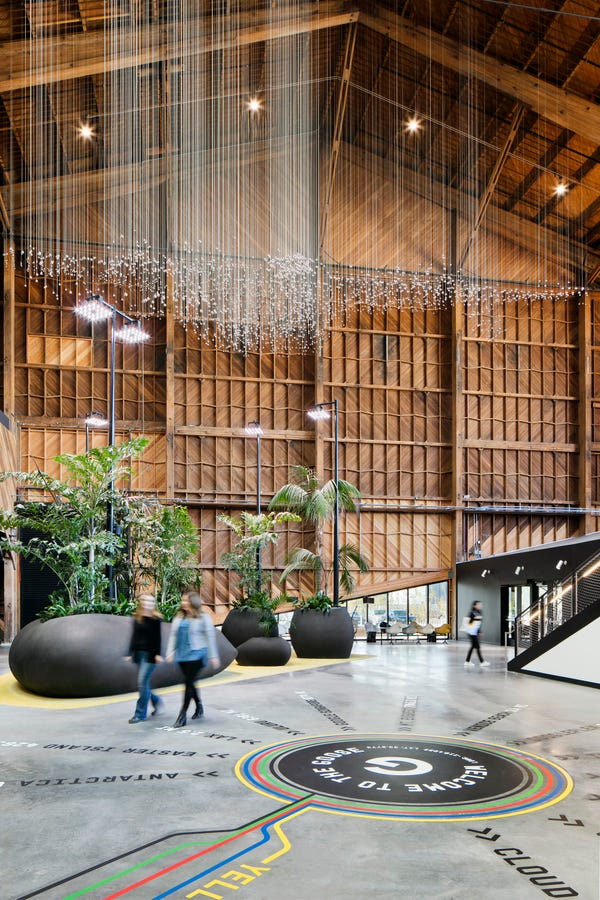 Large windows along the sides, which were boarded up during the hangar's soundstage days, were re-exposed. They flood the space with light. 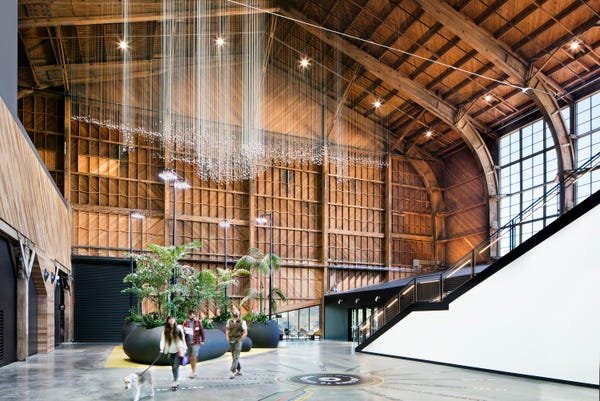 The building's spine was rebuilt with steel, then covered with the same refurbished wood panels. 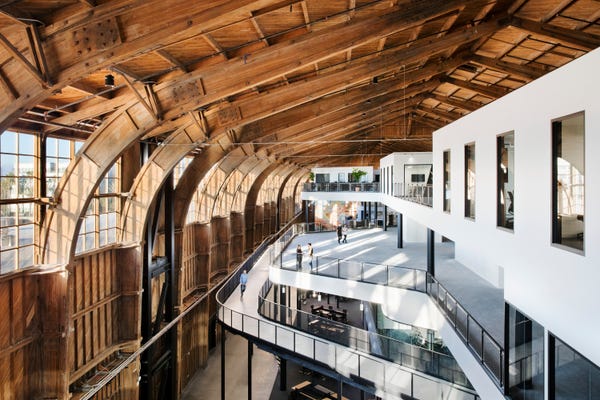 The hangar is a historical landmark, so the Google renovation preserved the original look, but did add in four new floors. 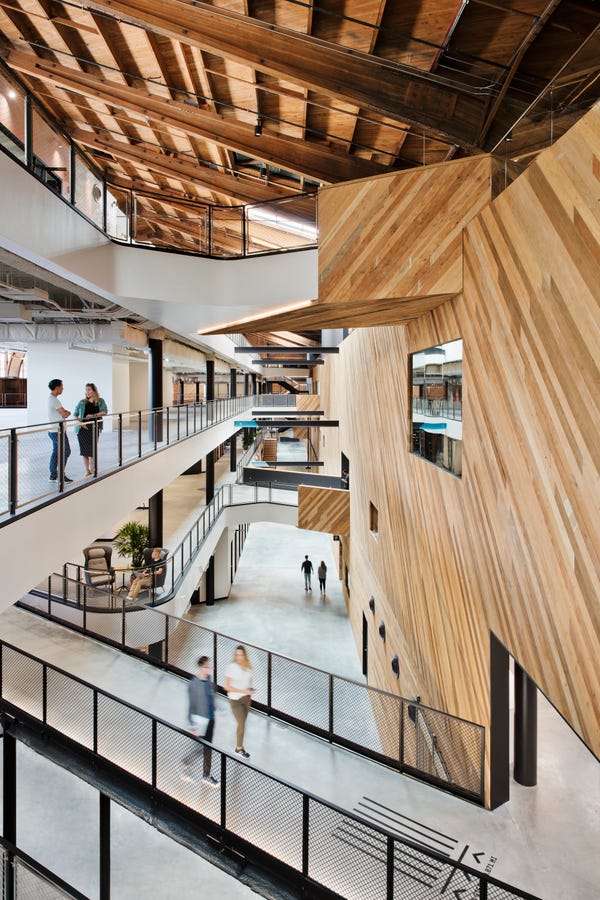 Wood arches and siding were preserved and exposed in the interior of the space. 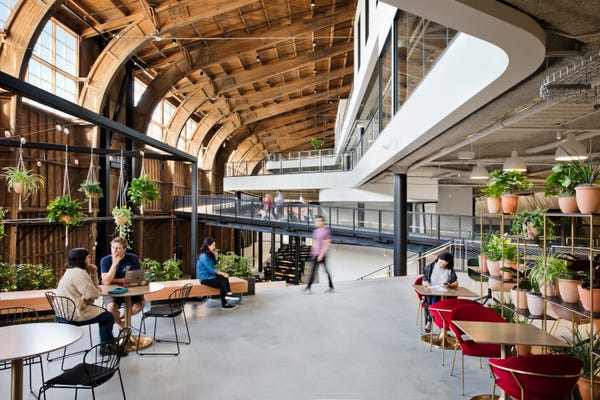 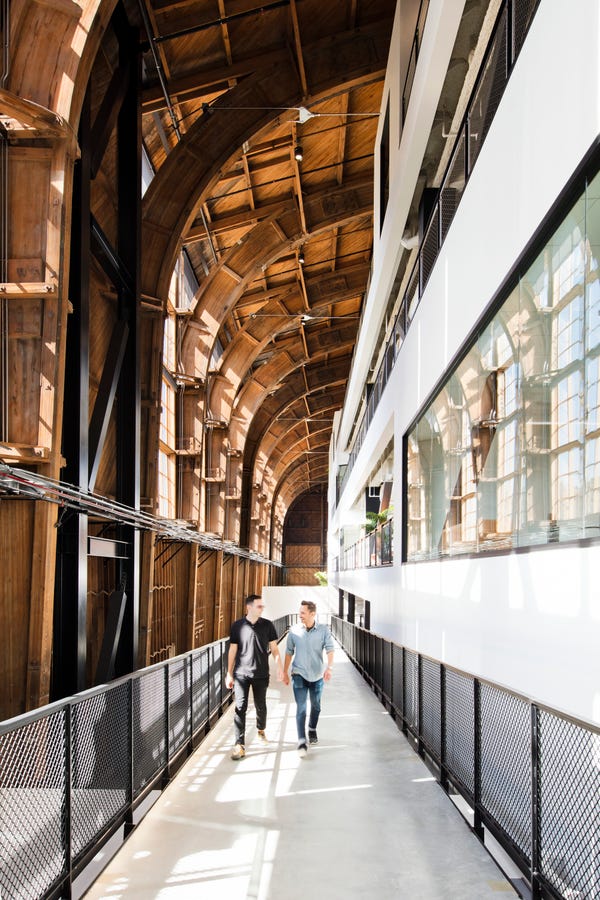 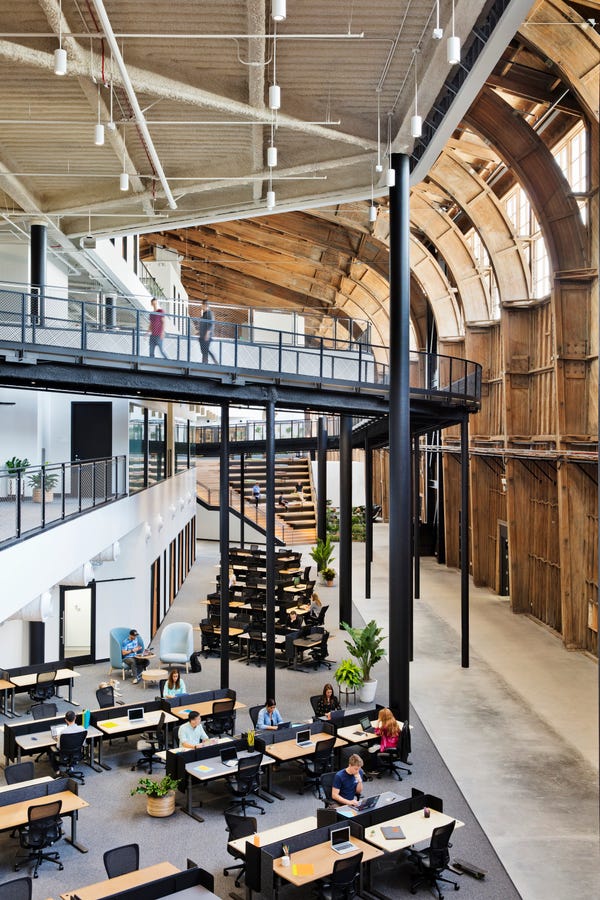 The building has offices, conference rooms, and event spaces … 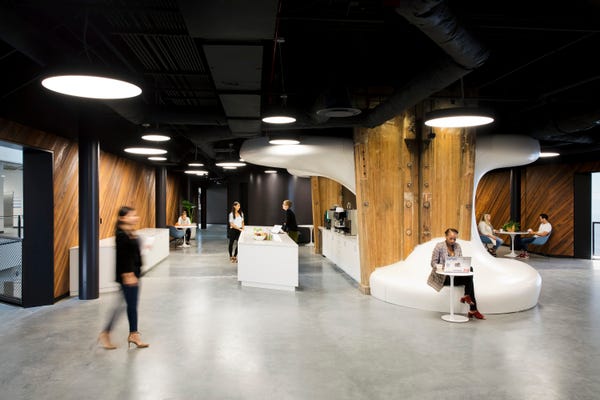 …. Amenities including a fitness center, music room, and massage room … 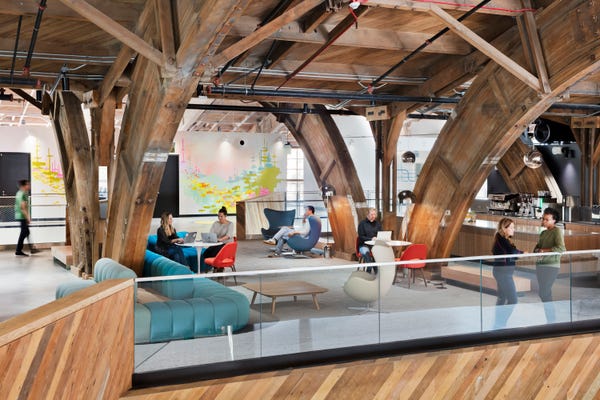 … Plus food service on each floor. 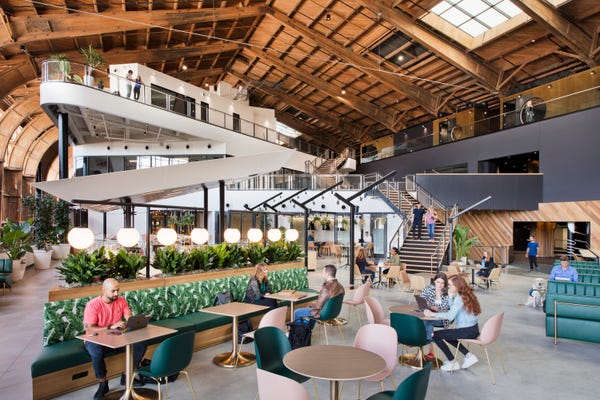 ZGF said in a statement that it designed the building so that residents can see the unique structure of the hangar from any point inside. 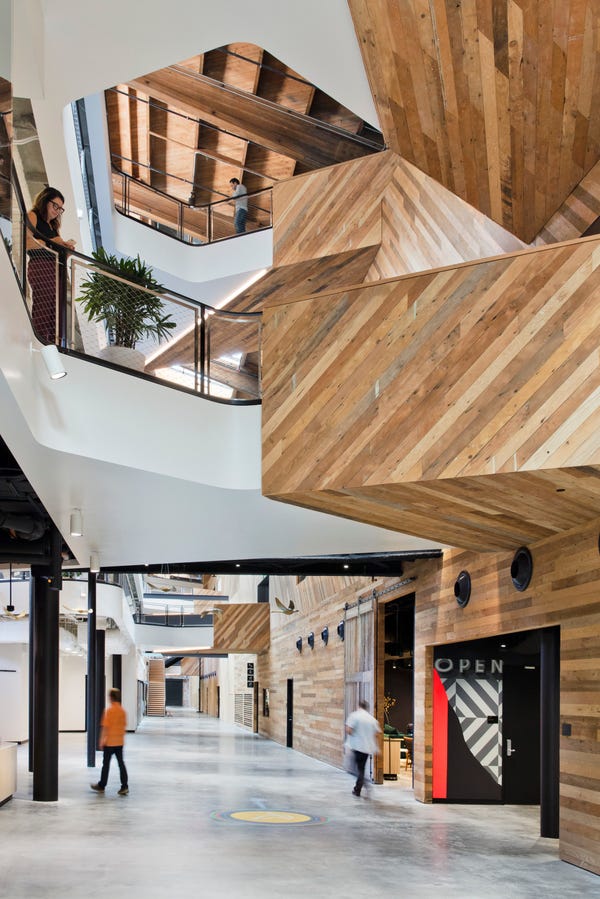 Contemporary and classic design meet and complement each other within the space. 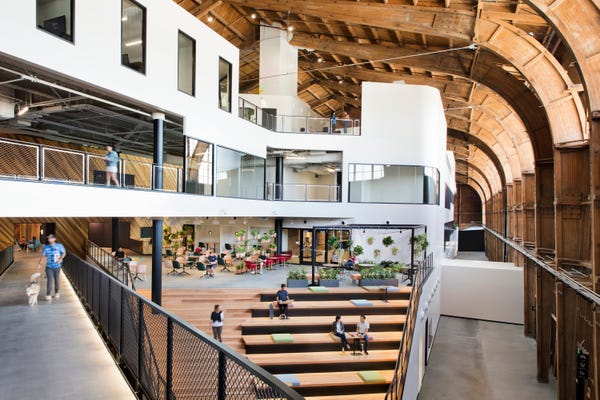 Offices are set back from the main atrium near the spine of the building, but glass walls still give a sense of the space. 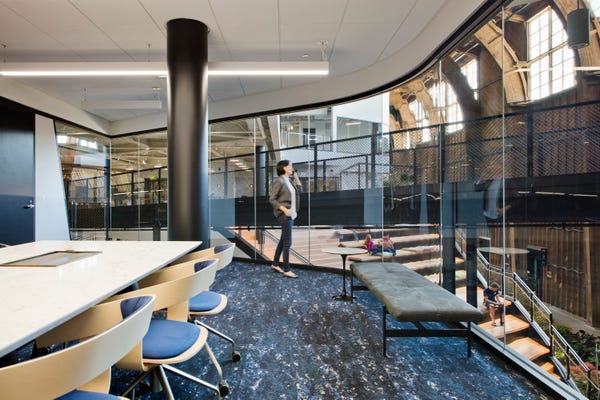 The building also has variety in how space is used. Some areas have double- or triple-floor height … 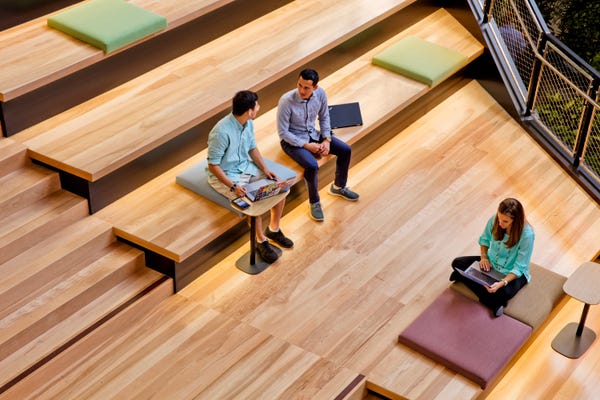 … A juxtaposition that ensures that natural light reaches every area. 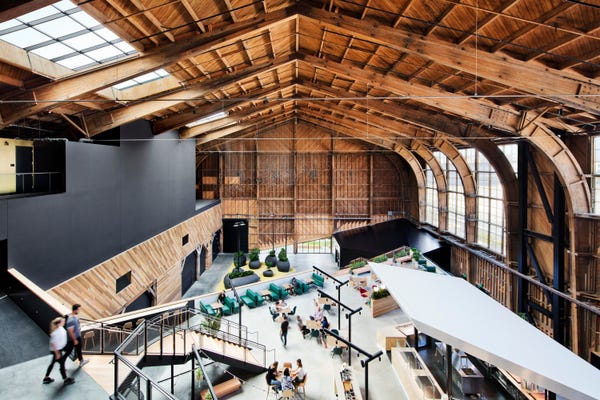 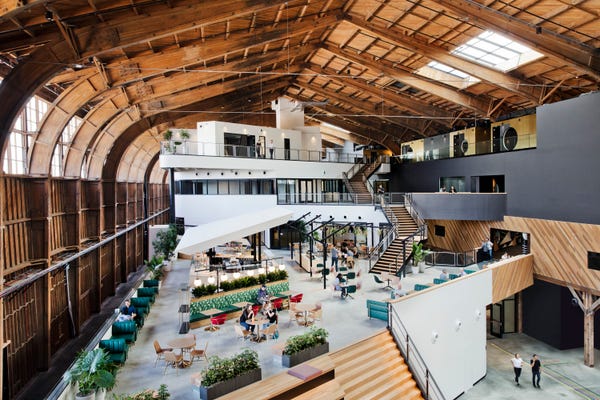 Offices and meeting spaces have a subtle theme that centers around flight, like Icarus — the hero of a Greek myth about a pair of wings — or Zephyr, a Greek god of wind. Other rooms have themes like confetti and kite. 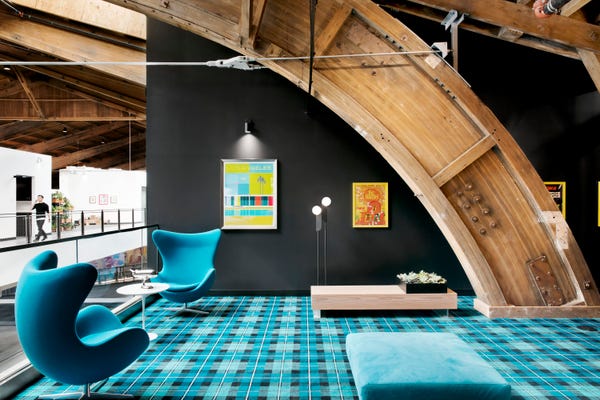 A boardwalk twists along the perimeter of the building on an incline from the first to third floors. 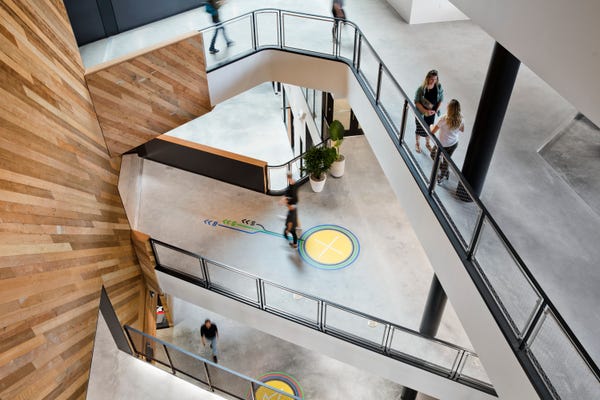 Much of the furniture was custom-designed for the space … 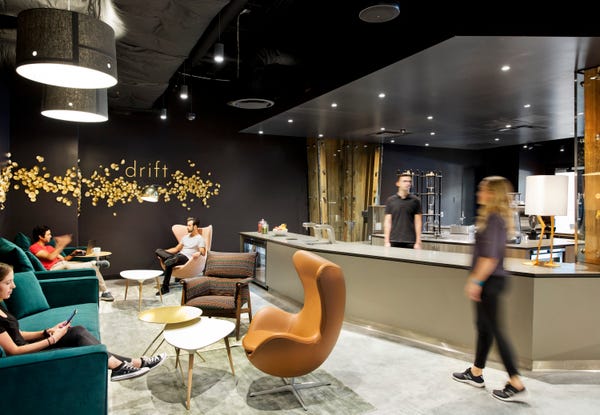 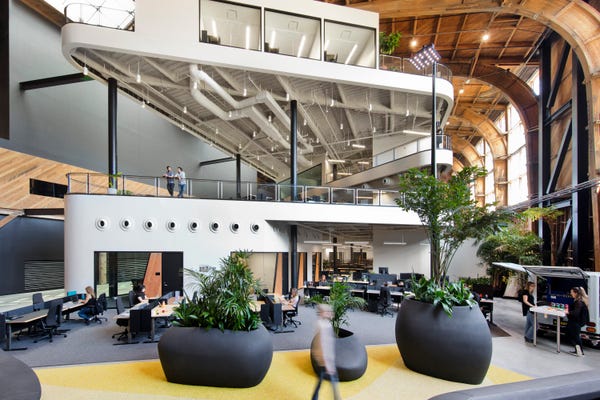 … Extra wood was even used to construct furniture, and the stairs carry the theme throughout as well. 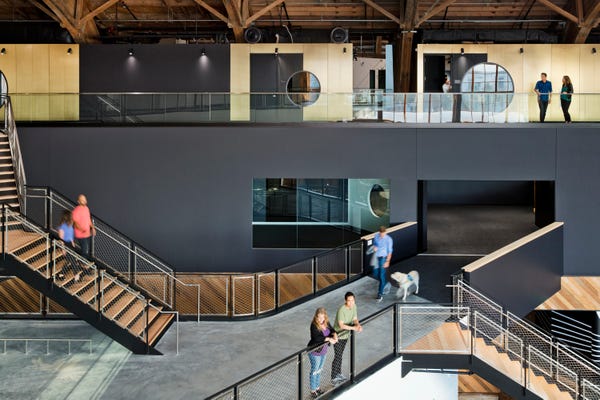 Each area has also been designed acoustically, so that, despite all the open space, sounds from one area don't carry over into the next. 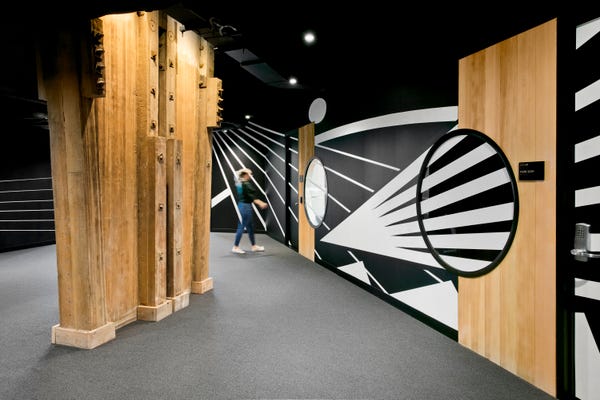 Custom murals throughout the space take up wall real estate and break up the uniform wood. 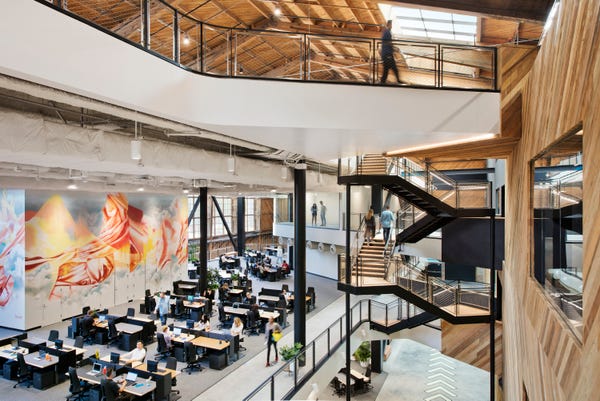 Google commissioned artists to create original works based on "the hangar's aviation history, Google's innovative ethos, and the multi-faceted spirit of Los Angeles," according to ZGF. 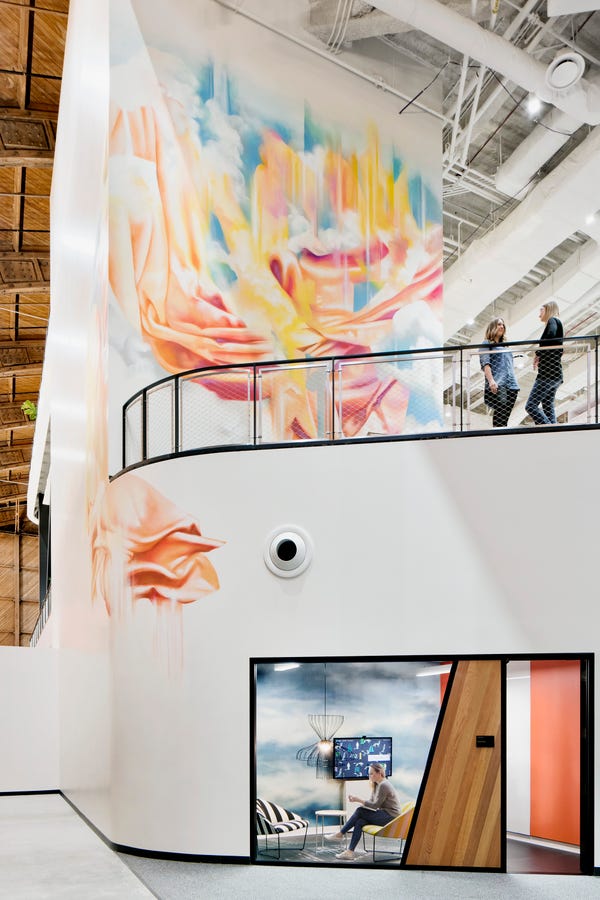 ZGF said that the space is designed to be a "mature and sophisticated environment," with "the engaging user experience" that Google is known for. 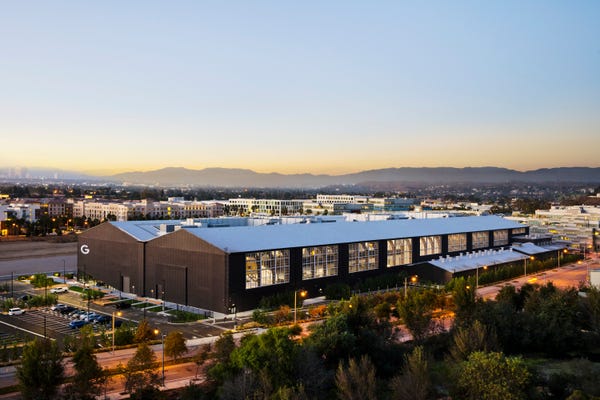 White House Easter Egg Roll Canceled Because of Coronavirus: 'Health Must Be the First Priority'