When America's financial markets regulator closed its investigation into Elon Musk's bungled effort to take Tesla private a year and a half ago, it imposed what appeared to be a relatively soft penalty on both the electric car company and the eccentric billionaire who runs it.

As penance for misleading claims that he had "funding secured" for a $US72 billion ($107 billion) deal to take Tesla private, Musk was forced to step down as the company's chairman; both he and the company agreed to a $US20 million fine each. 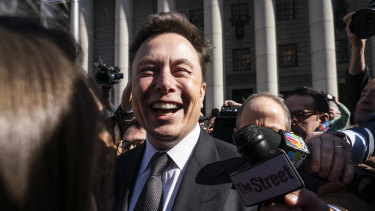 The former may have been a wrench for Musk, but in many companies it would merely be characterised as good governance. The fine, meanwhile, amounted to around one tenth of one per cent of his net worth at the time. In order to take responsibility for Tesla's share of the fine, Musk said he would buy an equivalent amount – $US20 million – in shares. This made about as much sense as settling an overdue bar tab by purchasing more drinks, but at least it demonstrated some form of humility.

Or so it would seem. Today, the shares Musk bought in this apparent act of self-flagellating penance are now worth almost $US50 million, wiping out the original fine with a tidy profit. There is little evidence that Musk's resignation as chairman has stunted his control. The whole Tesla privatisation saga seems almost forgotten, and certainly seems to have had few consequences.

It is perhaps unsurprising, then, that the market reacted with a collective shrug to last week's news that the Securities and Exchange Commission (SEC), the same regulator that oversaw this punishment, is once again scrutinising the company.

In a stock exchange filing, Tesla revealed that the SEC had asked for "information concerning certain financial data and contracts".

Neither the company nor the regulator went into further detail. None the less, it is the sort of disclosure that would usually trigger at least a modicum of concern. But there was no such response from the company's investors. On the day that Tesla revealed the SEC demand, its shares rose by almost 5 per cent.

This rise also came despite the company announcing plans to raise $US2 billion from shareholders in a share placing. Typically, issuing equity comes at some cost to one's stock price: first because companies typically sell at a discount to ensure a smooth transaction, and secondly because placings can be seen as an opportunistic attempt to cash in on a share price boom that may not last.

With the Musk reality distortion field applied, however, the company's $US2 billion cash call was not interpreted as a sign that Tesla's finances are shakier than they might seem, but as a sign of strength and further investment.

It did not even seem relevant that a mere two weeks earlier, Musk had insisted that raising capital "doesn't make sense" and that Tesla would be self-sufficient from now on, a contradiction that would have seen most chief executives accused of misleading shareholders. 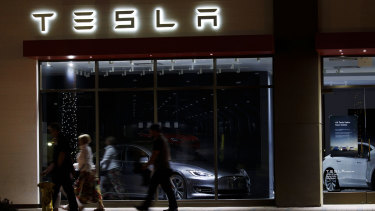 Tesla investors have for years begrudgingly accepted Musk's flaws: a seemingly compulsive need to get into trouble on Twitter, the higher-than-usual prospect of regulatory scrutiny, a growing list of side projects, and the fact that Tesla's board is filled with old acquaintances. It is all seen as the price of entry to the battery-powered transport revolution of which Musk is the figurehead. But chaos has now become so normalised that it hardly seems to matter. Joining Tesla for the ride was once a case of taking the bad with the good, today the bad hardly seems to matter, or at least has become so quotidian that it can be ignored.

One can see a logic to all this, however. It is the same phenomenon that means Donald Trump's outbursts no longer generate the controversy they once did.

In the same way that nobody bats an eyelid when the US president makes an off-colour comment, it hardly seems to matter that the chief executive of the world's second-biggest car company by market value is being investigated by the SEC one day, publishing techno music online the next, and defending himself against defamation claims the next. It's all part of the cult of Elon; buy into all of it, or none of it.

Except that this sort of thing only works when you're on the up. Tesla has been on a good run. While it is yet to make an annual profit, it has been in the black for two consecutive quarters and is selling more cars each year, while electric vehicles released by established carmakers are struggling to have an impact. In contrast to the production problems that plagued the Model 3, it has brought forward plans for its next car, the Model Y. As a result, shares have doubled in three months.

Perhaps this will all come to a head. The fact that Tesla has never made an annual profit and sells just a fraction of the cars that its less-highly valued rivals do might begin to count for something. But there is little evidence of that happening so far.