LAS VEGAS ― If this week was a do-or-die moment for her presidential campaign, Sen. Elizabeth Warren (D-Mass.) got the best possible outcome at Wednesday’s Democratic primary debate. She pummeled billionaire Michael Bloomberg and won rave reviews from the media and her competitors alike.

Now comes the hard part: proving she can fight her way to the top at the ballot box.

Warren’s strategy, based on the approach she took at a campaign event in Las Vegas, on a teleconference with voters in South Carolina and during a media blitz that involved appearances on “The View,” MSNBC and a CNN town hall, is simple: continue to relentlessly and ruthlessly attack Bloomberg, the former New York mayor.

The approach, so far, has netted her more than $5 million in 24 hours to help boost a campaign that has high overhead and was left with little money after the Iowa caucuses. It’s also provided a massive amount of media attention for a campaign whose supporters were recently worried about the “erasure” of her candidacy.

But it has not yet given Warren a clear path to winning the Democratic nomination.

Warren started her day with a canvass kickoff at a campaign office in a strip mall in North Las Vegas, where a high-energy group of volunteers repeatedly started chants of “It’s time for a woman in the White House,” and “Persist.”

“Last night was a lot of fun and I’ll tell you why,” said a clearly energized Warren, battling a cold that has made her voice hoarse in recent days. She then proceeded to focus most of her 10-minute remarks on Bloomberg, hammering his expansion of the police stop-and-frisk policy when he was mayor.

And she opened the CNN town hall by brandishing a contract she had written for Bloomberg to sign that would release the women who sued his company for sexual harassment from nondisclosure agreements.

“I wrote up a release and covenant not to sue,” said Warren, a former Harvard law professor who taught contract law. “And all that Mayor Bloomberg has to do is download it. I’ll text it. Sign it. And then the women or men will be free to speak and tell their own stories.”

“Despite starting 17 points down — and despite Mike Bloomberg trying to keep the Senate seat for Scott Brown — Elizabeth built a grassroots movement and beat him by 7.5 points,” her campaign wrote to supporters.

Even as she focused this week on winning the Nevada caucuses, Warren on Thursday dialed into a tele-town hall with supporters in South Carolina, the last of the early nominating states. After a brief introduction from Tameika Isaac Devine, a Columbia council member who endorsed the senator on the call because of her commitment to fighting for communities of color, Warren continued to hammer away at billionaires “like Mike Bloomberg” and their influence in politics.

“We’re up against billionaires and people who spend all their time sucking up to billionaires. I’m not doing that,” she declared.

But all of her Bloomberg bashing, regardless of how much it delights her supporters ― and it clearly does ― can’t solve her problem of finding a way to surpass Vermont Sen. Bernie Sanders in the polls. Sanders, who is favored to win in Nevada, has consolidated many of the young and left-leaning voters he and Warren had previously battled over.

One of Warren’s biggest supporters, Progressive Change Campaign Committee co-founder Adam Green, suggested on Thursday that her best path to victory may be through a brokered convention.

“It has to be a ranked-choice voting principle, where the Democratic Party can look as a whole and say, ‘Who’s our best bet to win? Who can we all unify around?’” Green said in an appearance on the web streaming show “The Hill’s Rising with Krystal Ball and Saagar Enjeti.” “I don’t see how you can defend the proposition that ― if at the end of the day, it is true that only 25%, 27% of Democratic voters want one person as the nominee, they should be the nominee.”

Warren also has begun to slowly lob more criticisms in Sanders’ direction. During a gaggle with reporters, she suggested the 78-year-old Sanders needed to release more medical records following his heart attack last fall. And during an appearance on MSNBC’s “The Last Word,” she pointedly questioned Sanders’ effectiveness. 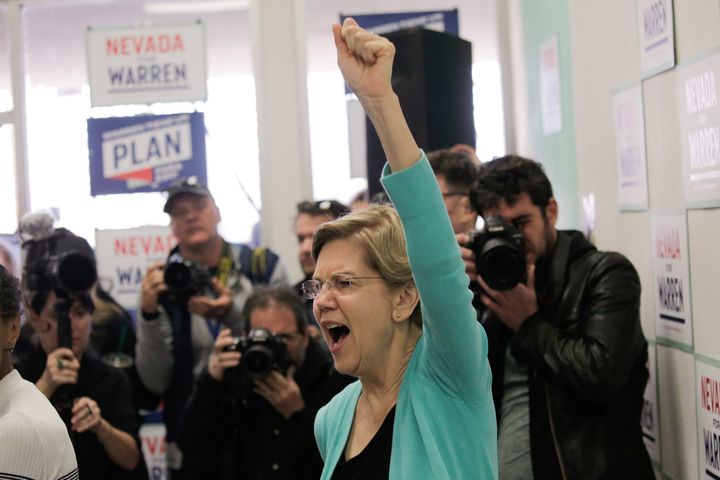 The Warren campaign said it had raised $5 million since the start of the debate, and $17 million in February, the highest of the year.

The Warren campaign is also set to receive a significant boost from a super PAC formed to support her candidacy, whose backing Warren tacitly accepted Thursday. The group, Persist PAC, has already reserved more than $1 million worth of television airtime in Nevada and South Carolina.

“I’m not ready to go away,” Warren said at the field office, referencing a recent Bloomberg suggestion that other candidates drop out so he could challenge Sanders one-on-one.

The one clear hiccup of the day for Warren, who built much of her campaign around the need to reform a corrupt campaign finance system, were her attempts to explain why she reversed course and decided to accept a super PAC’s help.

“If all the candidates want to get rid of super PACs, count me in, I’ll lead the charge. But that’s how it has to be,” Warren told reporters after the canvas kickoff. “It can’t be the case that a bunch of people keep them and only one or two don’t.”

At a panel discussion about issues facing Black women at the Eclipse Theater, none of the voters who spoke to HuffPost said they were more likely to vote for Warren as a result of her debate performance.

“I liked what Elizabeth Warren had to say. I loved how she came at” Bloomberg, said Rayshawn Williams, a pharmaceutical salesperson.

But Williams plans to caucus for former Vice President Joe Biden on Saturday, because she regards him as the most electable. (Williams said her policy views are closer to Sanders’ and Warren’s.)

Some people said that Bloomberg’s debate performance had soured them. “I was rooting for Bloomberg, however, Bloomberg obviously can’t debate,” said the Rev. Patrick Winfield, who watched highlights of the debate after it aired.

Winfield, who was getting a drink at the theater bar, not attending the discussion, had hoped that Bloomberg could neutralize Trump’s boasts about the growing economy. After seeing clips of Bloomberg’s performance though, Winfield concluded, “Short of his money, it’d probably be very hard for him to be elected or considered to be electable.”

Still others said they were simply sick of the Democratic candidates sniping back and forth.

Rather than come away impressed or better informed, Brian Harris, a media consultant who said his first three choices are Sanders, Warren and Steyer, was disappointed in the whole spectacle.

“I felt like I was at a low-budget Jerry Springer show,” he said.

You could be fined up to £5,000 and even lose your licence if you don't indicate when turning near a pedestrian