WASHINGTON — As she rose to stand in the East Room of the White House on Feb. 6, the eyes of the nation were upon Elise Stefanik. President Trump was celebrating his acquittal in the impeachment trial the day before with a freewheeling address that excoriated his critics and praised his supporters.

One by one, members of Congress stood to receive fulsome praise from the president, whether about their looks, their legal acumen or their reelection prospects.

There was little doubt that Stefanik would be among those thanked by Trump. During the impeachment hearings that took place in the House of Representatives in November, she emerged as a conservative celebrity for her dogged defense of the president.

“It’s most incredible what’s going on with you, Elise,” Trump said to Stefanik. “You were killing them.”

Impeachment appears to have been a boon for Trump, with the president enjoying the highest approval ratings of his presidency. Impeachment has also been a boon for Stefanik, who in November will defend the northern New York seat — in the state’s 21st Congressional District — that she has held since 2015. Stefanik’s most recent campaign filing revealed that she raised $3.2 million in the last three months of 2019. That exceeded the reelection haul of progressive darling Rep. Alexandria Ocasio-Cortez, D-N.Y., according to New York politics outlet City & State.

Stefanik has raised money from the likes of former libertarian presidential candidate Ross Perot Jr. and Karl Rove, the mastermind behind George W. Bush’s successful 2000 presidential campaign. While the amounts they donated are not enormous, the donations themselves are significant, adding credibility to the notion that Stefanik is indeed a conservative on the rise.

At the same time, she has accepted contributions from a disgraced casino magnate, as well as from a Florida-based donor who made racist statements about President Barack Obama.

While impeachment has proved helpful for her fundraising, it’s also sparked a backlash against her. Before impeachment, no national effort to unseat Stefanik was underway: Trump won NY-21 by 14 points.

That had also been Stefanik’s margin over Tedra Cobb, a county politician who is challenging her for the seat again. “She’s not vulnerable in 2020,” concluded polling expert Dave Wasserman, observing that Stefanik is “well-aligned with her North Country district,” which voted twice for Obama before moving sharply right in 2016.

Impeachment, however, has focused progressive ire at Stefanik, potentially making the race more competitive than it would have otherwise been. In one tweet sent in the midst of the House impeachment inquiry, George Conway, the Republican attorney who is one of Trump’s most ferocious opponents, called Stefanik “lying trash” and urged his 940,000 followers to give to her opponent. They did, with Cobb reporting $2.05 million in contributions in the final fiscal quarter of 2019.

Act Blue, the progressive political group, has also singled her out. “We don’t need another grandstanding Trump sycophant in Congress,” it says on an anti-Stefanik fundraising page. 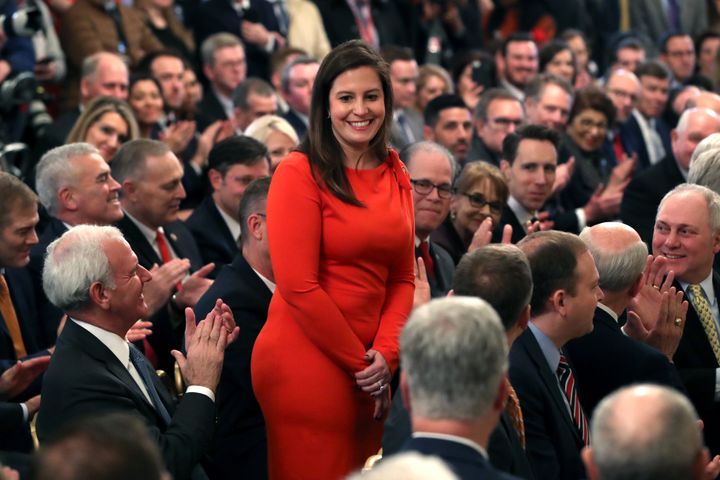 All this has turned a picturesque swath of the Adirondack Mountains into a proxy battle over the Trump administration, with Stefanik having become — as both supporters and detractors will note — a symbol of loyalty to Trump.

Like many Republicans, Stefanik cast impeachment as a partisan affair, an effort they charged Democrats launched to negate the 2016 election and sway the 2020 contest.

The first public testimony in the impeachment inquiry came on Nov. 13 of last year, with appearances from William Taylor, then the acting ambassador to Ukraine, and George Kent, a top State Department official. As they had in earlier closed-door depositions, both career public servants provided testimony that was critical of Trump’s efforts to pressure Ukrainian authorities to open investigations that could benefit him.

Stefanik pushed back against their narrative. In crisp and focused questioning of the two witnesses, she had them concede that Ukraine did struggle with corruption and that, despite concerns, Ukraine still received the aid Trump was accused of withholding until Ukrainian President Volodymyr Zelensky announced investigations that could help Trump politically. She also compelled Taylor to say the Trump administration had provided more military aid to Kyiv than the Obama administration had.

Just hours after that testimony, Stefanik’s reelection campaign sent an email to supporters. “WATCH: I EXPOSED ADAM SCHIFF,” the subject line said. The body of the email shows a prominent “Elise for Congress” logo.

“Today, millions of Americans tuned into the first public hearing focused on impeachment,” the text of the email reads. “This is after two months of closed door meetings in the basement of the Capitol as part of Adam Schiff’s Regime of Secrecy. WATCH my questions from today.” There follows a YouTube clip of her questioning Taylor and Kent.

The email ends with an appeal for funds: “Please donate today to stand against this partisan political process orchestrated by Adam Schiff.”

Members of Congress can be as partisan as they want in their appeals, but they are forbidden from using footage of hearings, or floor proceedings, in fundraising efforts. In a letter sent on June 7, 2018, the House Ethics Committee reminded legislators that “rules specifically prohibit the use of footage of House Floor activities and committee proceedings for any partisan political purpose.”

The Stefanik campaign’s YouTube page — which features the campaign logo — also contains several videos from the impeachment inquiry. The clips have titles like “Adam Schiff Refuses to yield to Stefanik at Impeachment Hearing Day 2.”

A complaint regarding Stefanik’s use of impeachment footage was filed by Susan Delehanty, a Stefanik constituent who lives in the Adirondack Mountains region of New York, and sent to Omar Ashmawy, chief counsel of the Office of Congressional Ethics, on Dec. 9. In her complaint, Delehanty asked Ashmawy to “initiate an investigation” into Stefanik, who according to the letter “seems to have violated well-established House ethics rules that prohibit the use of official House resources for partisan campaign purposes, including House committee proceedings.”

The letter notes that in addition to the fundraising email and the YouTube channel, Stefanik sent out clips of the impeachment hearings from a Twitter account associated with her reelection campaign.

Delehanty told Yahoo News that while she is a supporter of Stefanik’s opponent, Cobb, “I am sick and tired of Stefanik putting herself and her party ahead of the North County,” she said in a written statement. “I watched in shock at the Congresswoman’s partisan behavior in the House Intelligence Committee Hearings this November.”

A spokesman for the Office of Congressional Ethics declined to comment on the complaint, though Delehanty was sent an email acknowledging that it had been received. The spokesman said that if an investigation were to be launched, Stefanik would be notified. The results of such an investigation would not necessarily be made public.

In an email exchange with Yahoo News, Delehanty reiterated that she was acting out of principle. She said she was “incensed” by Stefanik’s behavior during the impeachment inquiry. When she saw that Stefanik was using impeachment clips to raise funds for reelection, she said, her anger compounded. She adds that she “researched how to file a complaint” and discussed the matter with like-minded friends, including individuals affiliated with the Cobb campaign. 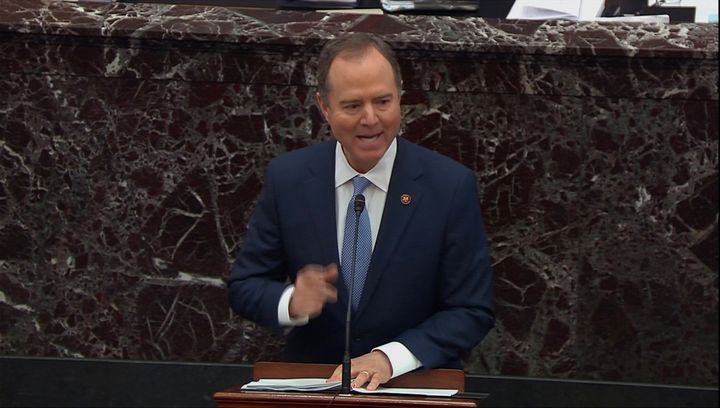 It was the Cobb campaign that initially notified Yahoo News of the existence of the complaint. A spokesman for the campaign declined to say whether anyone from the Cobb camp helped Delehanty in writing it. When pressed on the matter, Delehanty did not divulge specifics regarding how the complaint was drafted. “I would say my letter was a group effort, but I had total control of the final product,” she said.

The Stefanik campaign maintains that it did nothing wrong.

“Our office has never been notified about an ethics investigation since Congresswoman Stefanik was sworn into office,” said Stefanik spokeswoman Maddie Anderson, who is both part of her campaign and her House office staff (such arrangements are not uncommon in Washington).

“I think Rep. Stefanik’s use of video of the House hearing to solicit political contributions is a serious violation of that rule,” says Larry Noble, the former general counsel of the Federal Election Commission. “The rule is clear, and so is the guidance given by the House Ethics Committee.”

Donald K. Sherman, general counsel of the ethics watchdog Citizens for Responsibility and Ethics in Washington — a group that routinely opposes the Trump administration — agrees with that assessment. “House Ethics Committee guidance clearly prohibits Members from using video of committee proceedings for campaign purposes,” said Sherman, who was previously a high-ranking Senate attorney, “which Rep. Stefanik appears to have done nine times in the last six months.

“It seems that in her rush to defend the misconduct of a corrupt President, Rep. Stefanik has joined him in breaking ethics rules for political purposes.”

Stefanik has also been criticized for sending a Jan. 9 fundraising appeal that showed a doctored photograph of House Speaker Nancy Pelosi. The image was manipulated to make Pelosi look older and more sinister. Stefanik took the criticism in stride: “Thanks @washingtonpost for your article promoting & advertising my donation page urging Pelosi to stop her political games,” she wrote on Twitter. The message included emojis of stacks of cash, which Stefanik said were “flying in.”

The money does appear to be flying in. But with that comes scrutiny of who is doing the giving. Cobb’s campaign has recently begun to criticize her for taking money from Steve Wynn, a Las Vegas hotelier worth $3.1 billion. The onetime finance chairman of the Republican National Committee, Wynn was accused of sexual improprieties in 2018.

Stefanik also received $5,600 in 2019 from Steven Alembik, who was widely criticized in 2018 for making racist statements about President Obama and Supreme Court Justice Ruth Bader Ginsburg. Ron DeSantis, who was then a Florida gubernatorial candidate, was pressured to return Alembik’s donations, though he ultimately declined to do so. Alembik’s page on LinkedIn contains several photographs of him and DeSantis.

Stefanik’s campaign said it “condemns” Alembik’s “racist” statements and “will continue to speak out clearly and consistently against racism and sexism.”

Her campaign declined to say whether she would return the money.