At least 80 domestic flights were cancelled in Australia on Christmas Eve, as COVID-19 isolation requirements put a strain on the country’s airline staff.

A Sydney Airport spokesman told The Sydney Morning Herald and The Age there were 80 domestic cancellations on Friday across all airlines, affecting more than 500 flights. 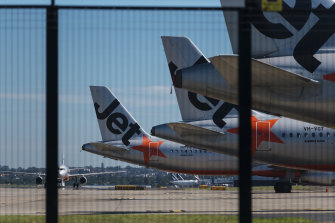 Jetstar says flights are being impacted by crew in isolation.Credit:James Brickwood

An airline staff member who did not wish to be identified told The Sydney Morning Herald and The Age that departure boards at Melbourne and Brisbane airports were earlier on Friday displaying previously scheduled services that had been changed in the lead-up to Friday, creating a sea of red and making it look like there were more cancellations than there actually were.

These departure boards have subsequently been updated to accurately reflect airline operations, the staff member said.

At Melbourne Airport, a total of 52 flights in and out of the city on Friday were cancelled. Of those, 35 had already been rescheduled on December 20.

A Jetstar spokesperson said its cancellations and scheduling adjustments were due to staff COVID-19 isolation requirements.

“Unfortunately like many people in Sydney and Melbourne, a large number of our frontline team are being required to test and isolate as close contacts given the increasing number of cases in the general community, and as a result we have had to make some late adjustments to our schedule,” the Jetstar spokesperson said.

“We appreciate the frustration this causes, especially as customers are travelling for Christmas, and sincerely apologise for the impact these changes are having on travel plans.

“We are working to minimise any delays and re-accommodating passengers on flights as close as possible to their original departure times across both Jetstar and Qantas services.”

Jetstar customers were looking at an average four-hour recovery time before they are put on another flight, said a person with knowledge of the situation who did not want to be identified.

Virgin Australia said its customers had also been impacted by a number of scheduling changes, many of which had been made before Christmas Eve.

There was only one unplanned Virgin flight cancellation on Friday.

“We apologise to any guest impacted by changes to our schedule and we are ensuring all guests make it to their final destination today,” a Virgin spokesperson said.

“All impacted guests were contacted prior to travel and automatically moved onto alternative services that are departing as close to the original departure time as possible.

“Guests are encouraged to visit the Virgin Australia website to check the status of their flight prior to travel.

“Virgin Australia is operating hundreds of services today with little to no impact on scheduled departure or arrival times.” 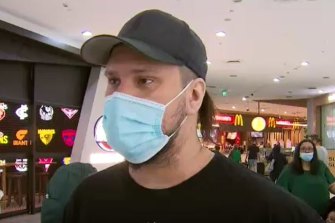 All Virgin guests have been moved onto an alternative same-day service, arriving on Friday afternoon.

Blaize Tilley said he was headed to Coffs Harbour direct from Melbourne and was now looking at a flight through Sydney.

But first he faced a wait for airline staff to find his booking, which had gone missing in the system.

“If not, it’s not going to be good. I’m going to NSW to see my mum, I haven’t seen her for a couple of years because of lockdown restriction, so I’m hoping to see her this year,” he told Nine News.

Holidaymakers hoping to make it into Brisbane have faced similar issues after dozens of flights were cancelled. An airport spokeswoman said about 45 flights in and out of Brisbane had been cancelled out of 400 flights on Friday.

Amber Tiloy got a message from Virgin at midday on Thursday saying her Friday flight from Melbourne to Sunshine Coast had been cancelled due to crew limitations.

She said she later received an email from the airline informing her the flight would go ahead but it had been rescheduled to 11.40am on Christmas Eve, earlier than her initial arrival time.

With the results of her PCR test taken on Wednesday yet to be processed, Ms Tiloy worried the earlier departure would mean she wouldn’t meet the requirements to cross the border into Queensland.

All arrivals to the state from high-risk locations such as Sydney and Melbourne are required to provide proof of a negative PCR test result taken 72 hours before departure.

Queensland Premier Annastacia Palaszczuk said this week she would consider moving away from PCR tests to requiring only rapid tests to enter the state after January 1, but for people like Ms Tiloy the change comes too late.

“At the moment I’m a bit annoyed because it’s a lot sooner than we had planned. For people to pick us up and things like that isn’t such a big deal but the test result is not there,” she said.

“I tried calling [the testing clinic], emailing. They don’t pick up, there’s no response. Same with Virgin actually so I don’t know what to do.”