Domino’s CEO Don Meij expects pizza delivery numbers to remain strong, even as the COVID-19 recovery sees consumers dine out instead of ordering in, as “one-off factors” took a hefty bite out of the fast food chain’s December half profit.

The global pizza network on Wednesday revealed a net profit loss of 6.9 per cent to $89.1 million for the first half of the 2022 financial year, and a 2.5 per cent drop in earnings before interest, taxes, depreciation and amortisation (EBITDA) to $212.8 million. 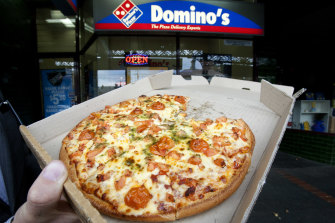 Domino’s Pizza shares have tumbled on Wednesday following the release of its results.Credit:Luis Enrique Ascui

Domino’s shares slid by more than 16 per cent on the back of the results, with investors unimpressed by the outlook. The company’s share price, currently around $86.62, has nearly halved in value from its peak of $167.15 from September last year.

A note from Jarden analysts described Domino’s half-year figures as a “soft result” and said the pizza giant would face questions about profit impacts, inflation, and decision to roll out new stores amid a “softer top-line environment”.

Mr Meij said the pizza chain would respond to rising inflation by focussing on “efficiencies to reduce costs to stores” and growing total sales to help boost the bottom line of franchisees.

“I don’t think the results are as bad as what the markets are showing at the moment – there are some growth opportunities there,” he said.

However, he noted the company had missed its income targets and inflation would remain a key challenge for the pizza business. “The cost of food is potentially one of the biggest headwinds,” Mr Hannah said.

Domino’s, valued at $7.4 billion, was weighed down in the half by the sale of 19 Australian company-owned stores back to franchisees which cost the business $6 million in the first half, as well as the temporary closure of its New Zealand market, knocking out just under $2 million. Losses in Domino’s Japan business also made a $9 million dent to its bottom line

In Australia and New Zealand specifically, earnings before interest and tax (EBIT) dropped by 6.1 per cent to $60.3 million, though domestic sales grew by 6.4 per cent to $689.6 million. 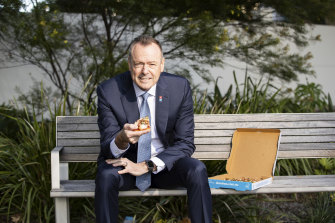 Domino’s CEO Don Meij says the company has all the “essential ingredients” for long-term success.Credit:Attila Csaszar

Defending the losses, Mr Meij said he was “really happy” with the numbers. “Some of these things are just our own investments,” he said. “The big picture is in place – there were just some one-off factors in this last half.”

While earnings were down, Mr Meij said Australia was currently one of the global pizza chain’s best-performing markets that saw record sales volumes in December.

“There’s still a lot of work from home, a lot of study from home. Across the globe, we’re enjoying very strong delivery sales … we expect that to continue,” he said.

Looking ahead, Domino’s will aim to increase deliveries through a new app, website, and new products that will roll out later this year.

Mr Meij said he was “not at all” concerned about the pandemic recovery’s impact on its sales numbers.

“Nothing in our data shows that customers have dropped away,” he said. “Europe had a great reopening where everyone was out at cafés and restaurants – our deliveries continued to boom. This summer, Australians were out and about, and we had record sales.”

Domino’s opened 285 new stores in the last half, with most of these in Taiwan, and aims to open a further 350 stores across Australia and New Zealand over the next 4-5 years. It currently has 726 stores in Australia.

Mr Meij acknowledged that COVID-triggered supply chain issues remained a key challenge for the business this year. “We’ve dealt with that well … but it’s still a focus.”

The company will pay a partially franked dividend of 88.4 cents per share on March 17.