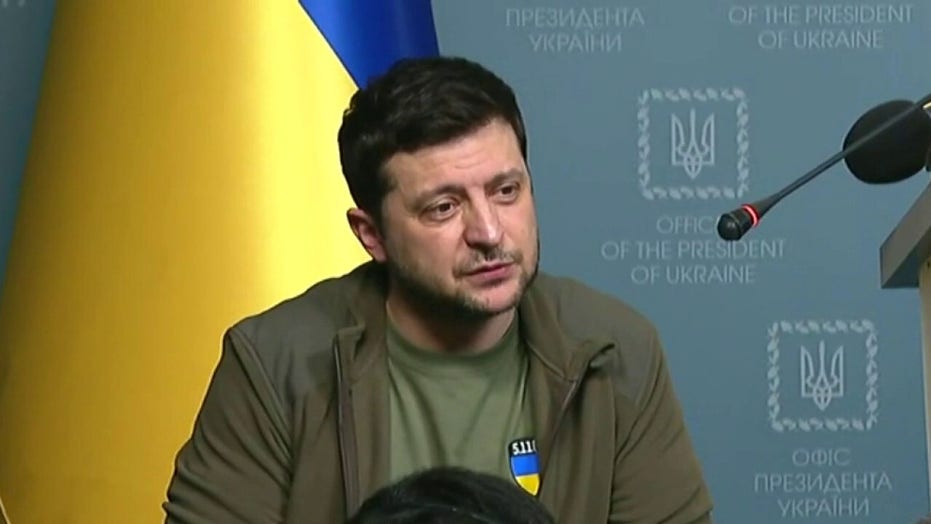 “Please pray for Ukraine,” my friend said. Within in sight of the Washington Monument, she shared pictures just texted from family members huddled in a Kyiv bomb shelter.

While Russia’s invasion of Ukraine is not a religious war, per se, religion is a strong subtext. Both Ukraine and Russia are ancient bastions of Christianity. And this Christian history is part of President Vladimir Putin’s twisted logic to justify the unjustifiable aggression. 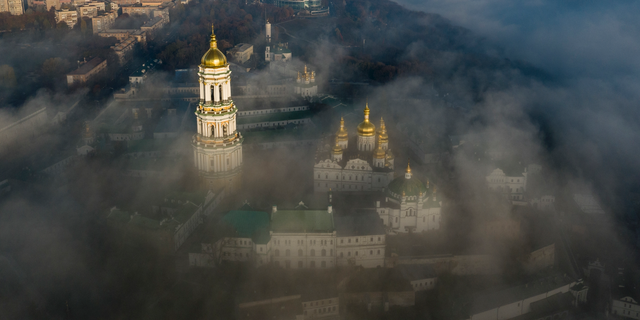 An aerial photo of the thousand-year-old Monastery of Caves, also known as Kiev Pechersk Lavra, the holiest site of Eastern Orthodox Christians is taken through morning fog during sunrise in Kiev, Ukraine, on Nov. 10, 2018.
(AP Photo/Evgeniy Maloletka, File)

In his speech, Putin said, “I would like to emphasize again that Ukraine is not just a neighboring country for us. It is an inalienable part of our own history, culture and spiritual space.” Ignoring Ukraine’s centuries-long national identity distinct from Russia, he added, “the people living in the southwest of what has historically been Russian land have called themselves Russians and Orthodox Christians.”

Protecting this “inalienable … spiritual space” was part of Putin’s casus belli for attacking. In Putin’s history, Russia’s origin story began in present-day Ukraine and must be reclaimed. 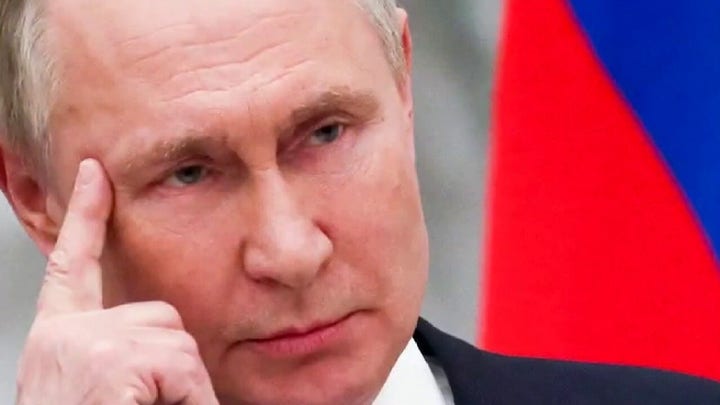 Certainly, Ukraine and Russia share a religious heritage dating back to the 10th century when the kingdom of Kievan Rus adopted Christianity as the state religion. From that start, Christianity spread throughout that part of Europe and into Eurasia. Through their turbulent histories, citizens of both countries tirelessly adhered to the faith.

Putin’s concerns for religious life are doubtful considering how he treats the issue at home.

The presence of these churches, all operating freely, reflects the religious freedom enjoyed in Ukraine. In addition, Ukrainian Greek Catholics are found in western Ukraine, with their liturgy and rites reflecting a shared orthodox heritage. Protestants, evangelicals, Muslims and Jews also enjoy religious freedom.

Putin’s concerns for religious life are doubtful considering how he treats the issue at home. Russian authorities regularly target evangelical and proselytizing groups, religious minorities and those challenging the religious status quo. The Trump administration added Russia to its watch list in 2020 for religious persecution. The Biden administration last year further designated Russia as one of the worst countries in the world for religious freedom violations. The European Court of Human Rights just ruled against Russia on these matters. 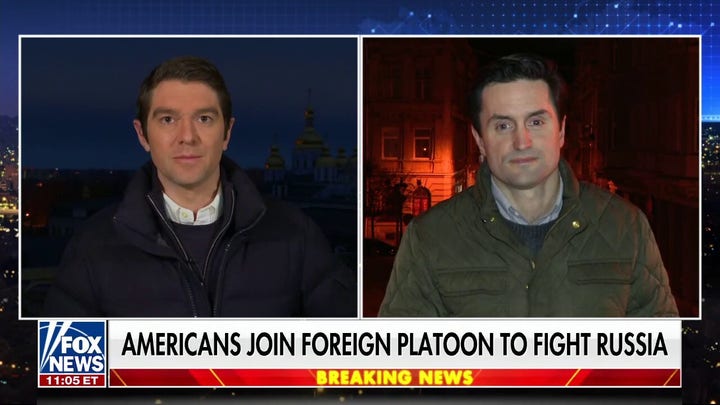 Should the Russians win this war, religious freedom would be one of many causalities in this needless conflict. The Ukrainian Council of Churches issued on March 1 a warning of a possible Russian airstrike on the St. Sophia Cathedral in Kyiv.

And Putin knows how to play politics with religion. Bolstering the Russian Orthodox Church, horribly repressed during the Soviet period, has been part of Putin’s effort to rebuild Russian identity. However, in exchange for state support, the Russian Orthodox Church lacks true independence from the Kremlin. Orthodox groups have also reported on Russian disinformation campaigns attempting to create conflict between churches in Ukraine. 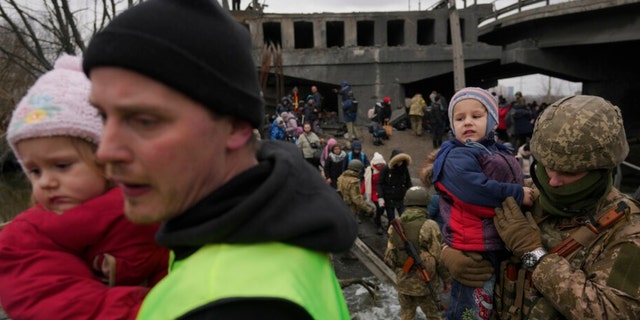 A Ukrainian serviceman holds a baby while crossing the Irpin River on an improvised path under a bridge that was destroyed by a Russian airstrike, as people flee the town of Irpin, Ukraine, on Saturday, March 5, 2022.
(AP Photo/Vadim Ghirda)

The statement of Russian Orthodox Patriarch Kirill of Moscow last Sunday echoed Putin’s war logic. “May the Lord preserve the Russian land. When I say ‘Russian,’ I use the ancient expression from ‘A Tale of Bygone Years’ – ‘Wherefrom has the Russian land come,’ the land which now includes Russia and Ukraine and Belarus and other tribes and peoples.” He even implied that Ukrainian forced defending their homes were “evil.” 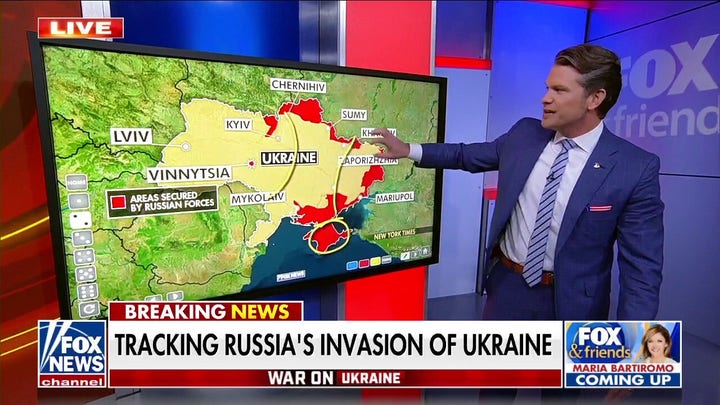 “Defending the sovereignty and integrity of Ukraine, we appeal to the President of Russia and ask him to immediately stop the fratricidal war.” Furthermore, he asked for “love and support to our soldiers standing guard and protecting and defending our land and our people.”

The heroism of Ukrainians defending their hearth and home against overwhelming odds has inspired the world. As Russian forces advanced on Kyiv, journalists caught a solitary woman extending her hands up to God in prayer outside St. Michael’s Cathedral. The Soviets once destroyed the golden domed cathedral in the 1930s, part of their effort to erase Ukrainian identity. After independence in 1991 from the defunct USSR, Ukrainian faithful immediately started to rebuild, an effort to restore their national and religious identity. St. Michael’s reopened in 2000.

The woman’s petition to God at that location made clear the stakes for Ukraine, both physically and spiritually. Hopefully, Ukraine will not face the same fate again at the hands of invaders.