EXPERTS have wiped centuries of dust and dirt from an ancient cross pedant discovered in a field in western Scotland.

The conservation work revealed amazing details of saints and animals carved by a Viking-age goldsmith of "supreme" skill. 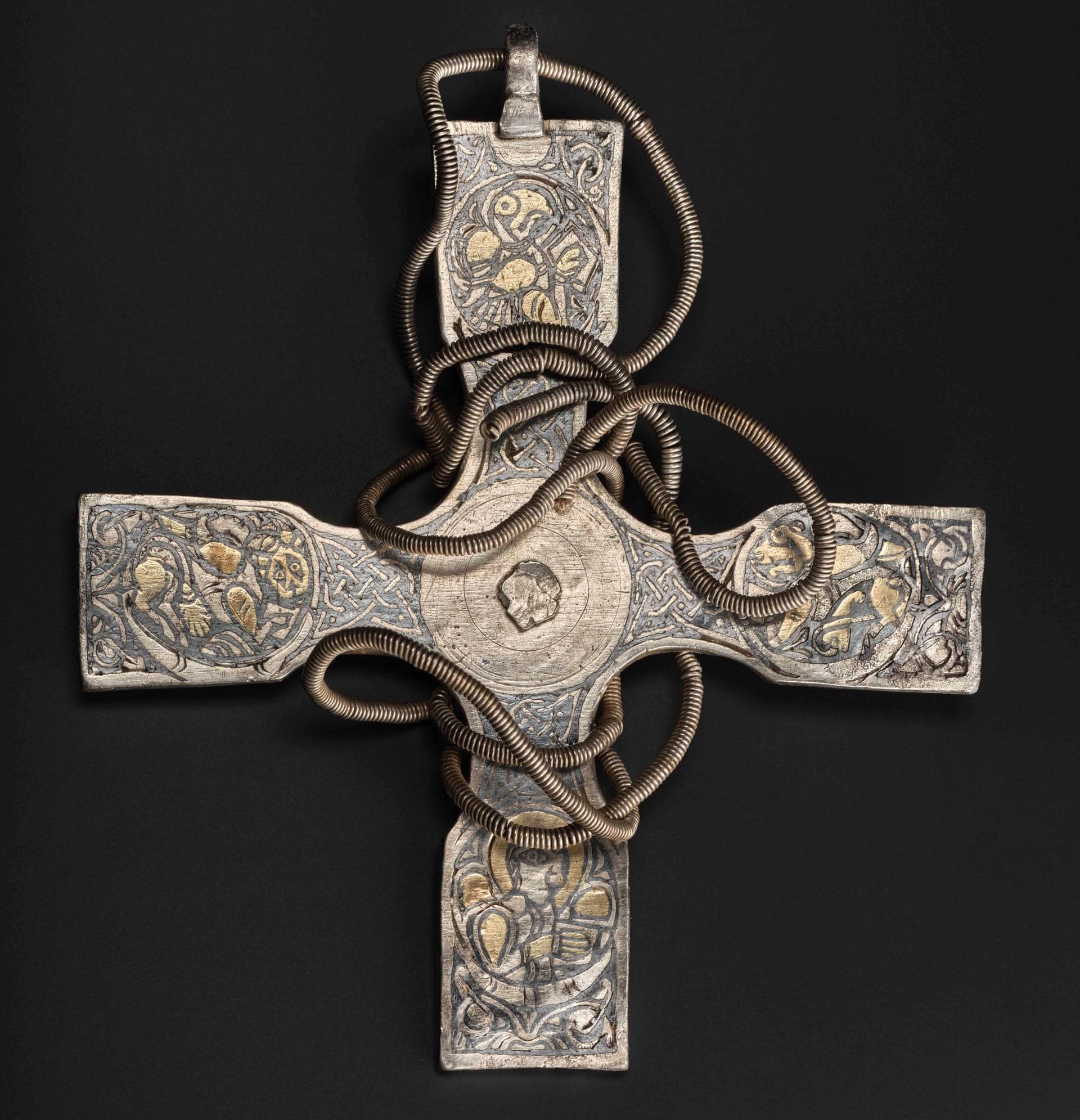 It's thought the cross, buried for over a thousand years as part of the Galloway Hoard, was made for a high-ranking cleric or king.

The Galloway Hoard is one of the UK’s most important archaeological finds, discovered by a metal detectorist in 2014.

Specialist conservators at the National Museums Scotland (NMS) have spent months painstakingly removing "a millennium’s worth of dirt" to allow scholars to view the intricately decorated cross properly for the first time.

The object, which was yesterday hailed as a "supreme" example of Anglo-Saxon metalwork, will go on display from February in a special exhibition at the National Museum in Edinburgh. 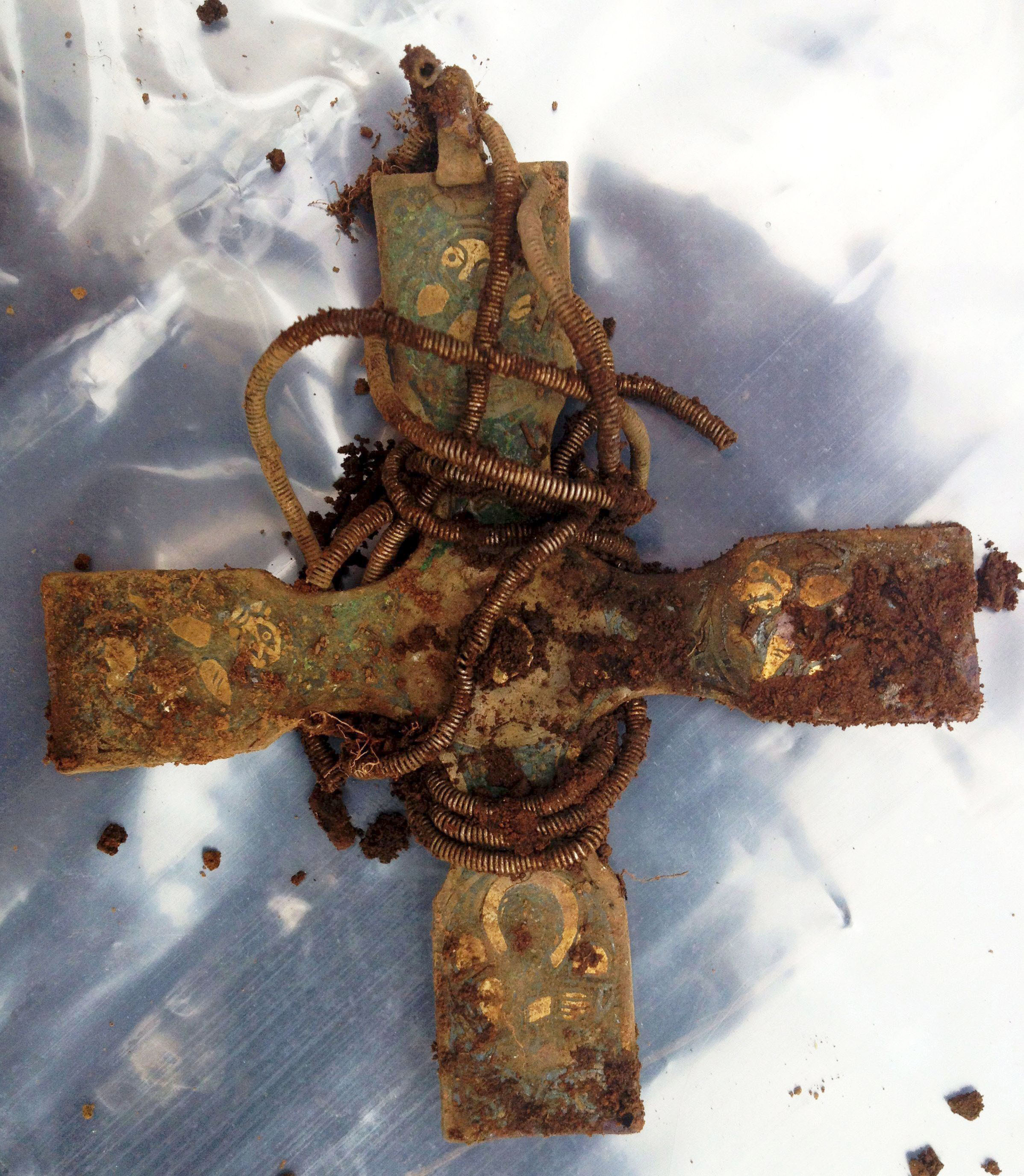 The recent work has revealed the silver cross, thought to have been made in Northumbria, is decorated in Late Anglo-Saxon style using gold-leaf.

Worn on a chain, the cross' four arms are decorated with the symbols of the four evangelists who wrote the Gospels of the New Testament.

It may have been robbed in a Viking raid, although it remains unknown why it was buried among the hoard or what it was later intended for. 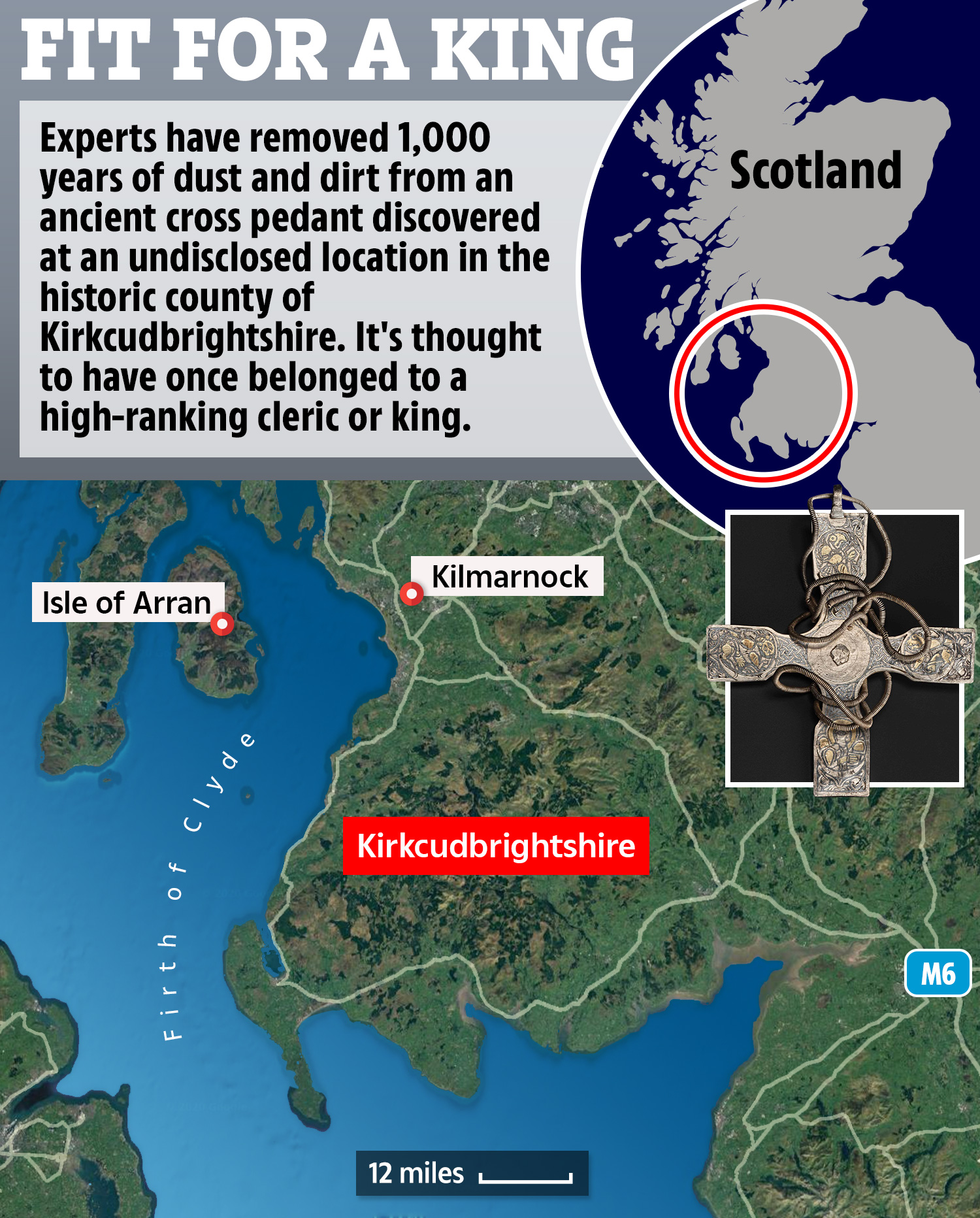 Dr Martin Goldberg, of National Museums Scotland said: "The conservation work lets us see this object clearly for the first time in over a thousand years, but it also reveals a whole new set of questions.

"Silver bullion, hacksilver and ingots formed the upper parcel of the Galloway Hoard, but there was also this very unusual feature – a cross with a fine spiral chain – recently worn, but damaged.

"We can easily imagine this cross being robbed from a Christian cleric during a raid on a church – a classic stereotype of the Viking Age. But the complexity of this hoard forces us to reconsider simple stereotypes." 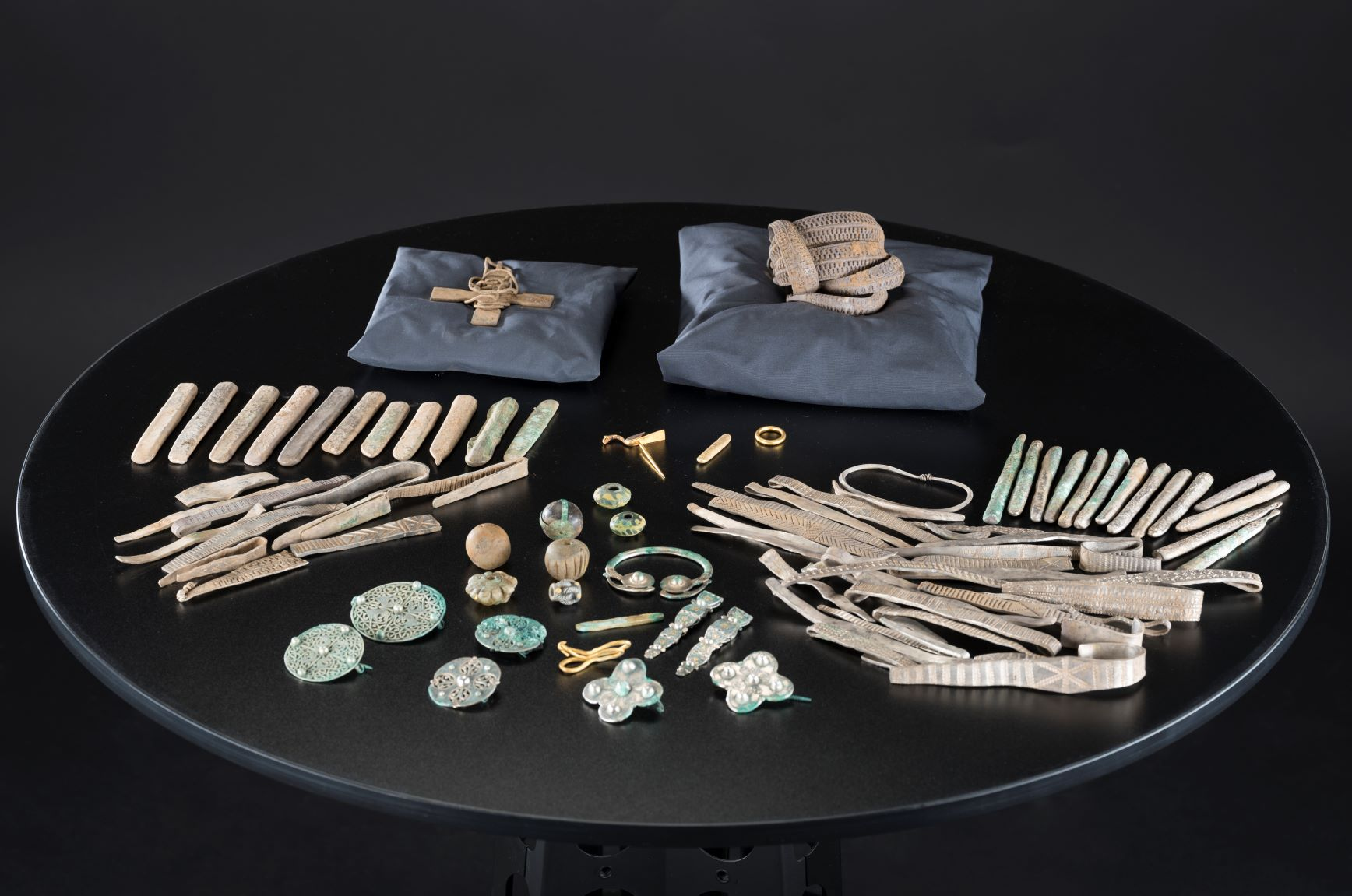 "Answers to the questions about the motives for burial can only be attempted once every object in the Hoard is analysed and understood, along with investigation of the wider context," Dr Goldberg said.

"This work will continue for years."

Dr Leslie Webster, former Keeper of Britain, Prehistory and Europe at the British Museum, said the intricacy of the decorations hinted at the work of a fine goldsmith.

"The pectoral cross, with its subtle decoration of evangelist symbols and foliage, glittering gold and black inlays, and its delicately coiled chain, is an outstanding example of the Anglo-Saxon goldsmith’s art," she said. 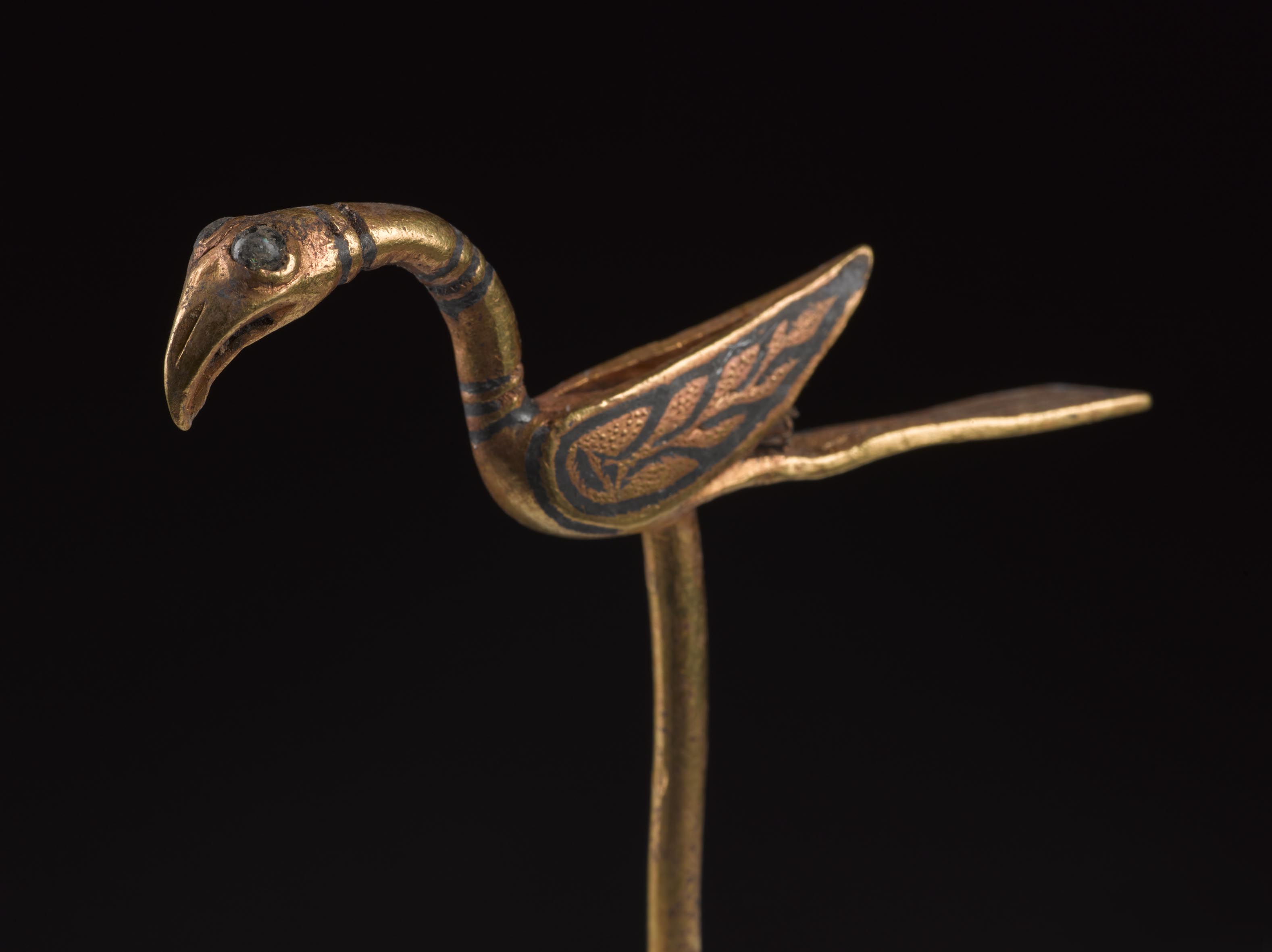 "It was made in Northumbria in the later ninth century for a high-ranking cleric, as the distinctive form of the cross suggests.

"Anglo-Saxon crosses of this kind are exceptionally rare, and only one other – much less elaborate – is known from the ninth century.

"The discovery of this pendant cross, in such a remarkable context, is of major importance for the study of early medieval goldsmith’s work, and for our understanding of Viking and Anglo-Saxon interactions in this turbulent period."

The Galloway Hoard brings together the richest collection of rare and unique Viking-age objects ever found in Britain or Ireland. 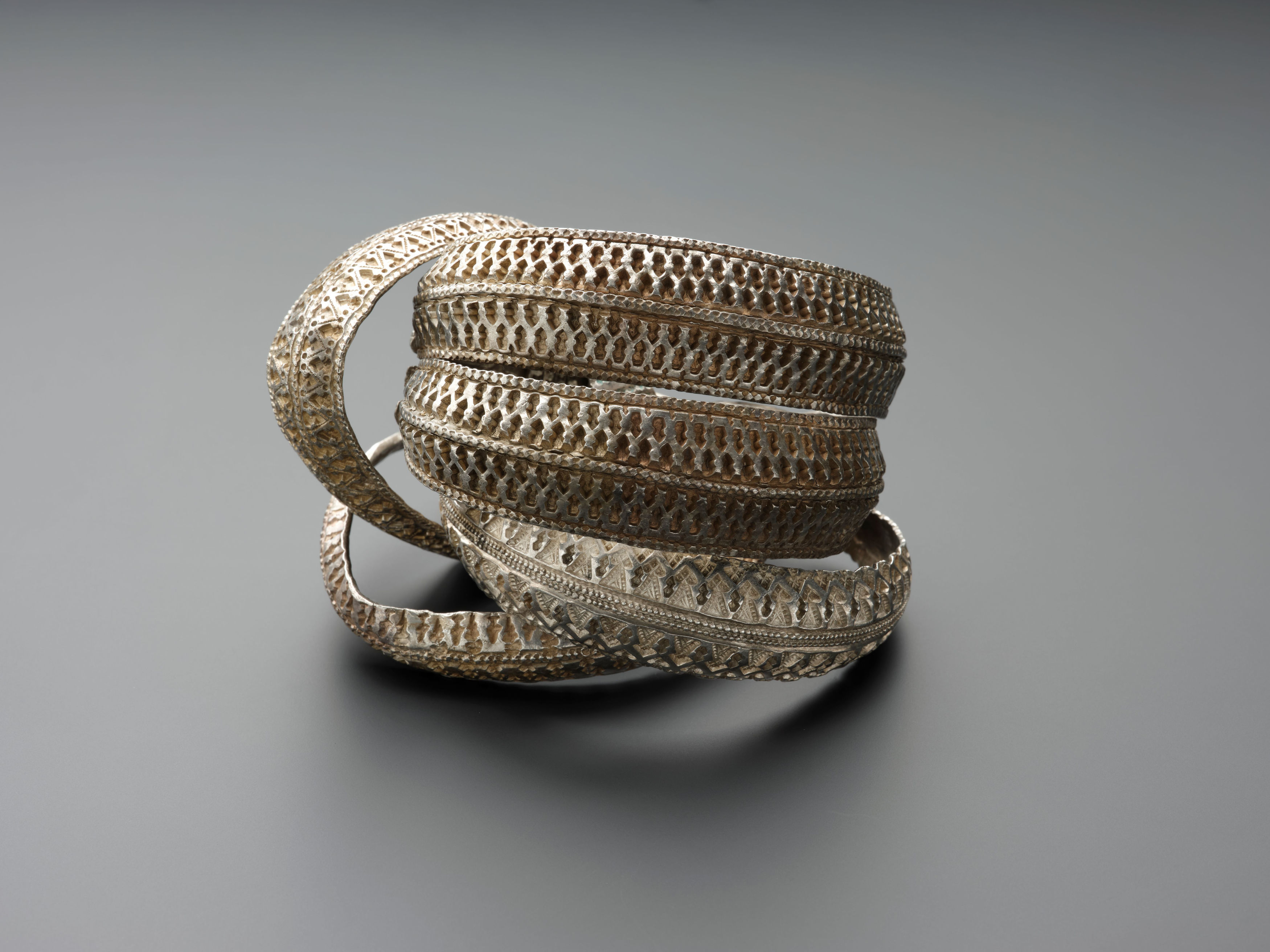 Buried around the end of the 9th century in what is now a Dumfries and Galloway field, the Hoard brings together a stunning variety of objects and materials in one discovery.

Research and conservation continues into the rare surviving organic materials and the inorganic objects they are combined with.

The act of removing dirt from the silver spiral chain wrapped around the cross was particularly intricate.

It's made from wire less than a millimetre thick and wrapped around an organic core, preserved within the coiled silver and identified as animal gut.

A brief history of the Vikings…

Conservators improvised a cleaning tool by carving a porcupine quill, sharp enough to remove the dirt yet soft enough not to damage the metalwork.

The new exhibition, "Galloway Hoard: Viking-age Treasure" will run at the National Museum of Scotland in Edinburgh from 19 Feb – 9 May 2021.

It will then be shown in Kirkcudbright Galleries from summer 2021 to spring 2022 and Aberdeen Art Gallery thanks to funding from the Scottish Government.

Part of the collection will then go on long-term display at the National Museum of Scotland in Edinburgh with a significant and representative portion displayed long-term at Kirkcudbright Galleries.

In other news, the face of a Viking warrior woman with a gruesome battle wound has been reconstructed by experts.

And, a treasure hunter has found an ancient coin with what appears to be an engraving of Donkey from Shrek in Buckinghamshire.

Who do you think the cross belonged to? Let us know in the comments…

Trump Seems To Endorse Extrajudicial Killing: ‘There Has To Be Retribution’