The chief executive of struggling department store David Jones has said the company's aggressive discussions with landlords have been going "quite well", as the business hopes to arrests its falling profits through a reduction of 31,000 square metres of floor space by 2022.

Ian Moir, who heads up both David Jones and its South African parent company Woolworths Holdings, told The Age and The Sydney Morning Herald the company was making good inroads on reducing its store footprint since he said it would "get aggressive" with landlords last year. 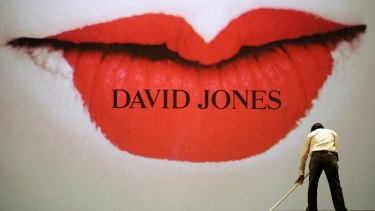 "We're reaching good agreements with our key landlords. I think there's a realisation that retail is changing, and we've all got to face into that change," he said.

"There's been good debate on how we reduce space where we need to, good debate about how we come to the party together on capital contribution. It's a good robust discussion that we're having with all of our landlords."

For the December half, operating profit at the upmarket department store continued to plunge, falling 57.4 per cent down to $20 million due to increased discounting, weaker sales, and lower foot traffic.

Sales on a comparable basis fell 0.4 per cent, which the company had warned investors of in a trading update in early January. Gross margin declined 2.9 per cent due to the inclusion of Boxing Day sales in the first half, which the prior corresponding half did not.

However, online sales at David Jones increased a whopping 61.8 per cent for the half, now making up 10.4 per cent of total sales for the department store.

David Jones' fellow Australian stablemate Country Road performed a touch better than the department store, with total sales up 3.3 per cent when adjusting for the company's exit from Myer stores. Including the exit, sales fell 2.5 per cent on the prior corresponding half.

The company said the overall macro environment in Australia "remained depressed" despite low interest rates, tax stimulus, and strong job growth. It also pointed to poor tourism due to fears from the coronavirus, which is also expected to affect product sourcing.

"It is pretty tough out there," Mr Moir said. "It's still promotional, still competitive, and they'll be more businesses that will go out of business and there will be more structural change."

"So it's not going to get any easier."

Woolworths announced in January it had appointed Levi Stauss executive Roy Bagattini as its new chief executive, with Mr Moir to act as David Jones chief executive until a suitable replacement was found.

Just three days into the job, Mr Bagattini said he would start to "narrow down" on problem parts of the business in the coming weeks but said he was currently doing a wide-ranging assessment of the company's segments and their health.

Trade for the first six weeks of the second half was improved, with sales at David Jones growing 2.6 per cent, and Country Road increasing 4.2 per cent.

Biden extends mortgage relief: What it means for you