When Victoria’s royal commission into Crown Resorts tabled its report last year, it recommended that the maximum fine that could be levied against the casino for a breach of its licence should be increased from $1 million to at least $10 million. By the time new state legislation had been introduced late last year, the maximum fine had been lifted to $100 million.

It was initially not clear whether this dramatic increase was political showmanship by the Andrews government, which had been caught napping while overseeing gambling in the state, or was a serious attempt to finally introduce fines of a scale that reflected the disgraceful litany of legal and ethical breaches that the royal commission had found. 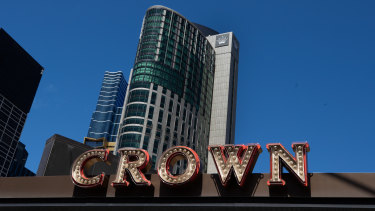 This week the question was answered. Crown Resorts was hit with a record $80 million fine over the illegal practice of accepting Chinese bank cards at its Melbourne casino to fund gambling and disguising the transactions as hotel expenses.

As the royal commission detailed, the casino always knew that the practice, which ran between 2012 and 2016, was legally suspect, but considered it the best way to get around China’s restrictions on Chinese nationals transferring money out of the country. The limit at the time was $US50,000. To get around this, Crown would charge international VIP patrons a room charge with false expenses of up to $500,000, then allow the patron to pay for it using a credit or debit Chinese-based bank card. Once paid, the amount would then be exchanged for cash or chips. The scheme was discussed for years within Crown, and red flags were raised on several occasions about its legality but nothing was done.

According to the Victorian Gambling and Casino Control Commission, which imposed the fine, Crown’s illegal scheme allowed VIP patrons to buy $164 million in cash and chips, from which the casino made about $32 million in revenue. At this financial scale, the previous maximum fine of $1 million, and even the $10 million suggested by the royal commission, was patently not enough to punish the casino, or to deter it from such behaviour in future.

While the gambling regulator should be commended for finally instigating a punishment worthy of the crime, there is more work to be done.

Among a litany of problems, the royal commission revealed Crown’s cavalier approach to gambling addiction, which allowed patrons to gamble for 18 hours straight and the employment of a tiny “responsible gambling team” to monitor its 2628 poker machines and 540 table games. It also disclosed that Crown underpaid tax on its poker machine winnings to the Victorian government by making illegal deductions, of which it has paid back about $61 million.

The state’s gambling regulator declared this week that it is considering further disciplinary proceedings against Crown related to these other findings. Each charge could attract a fine of up to $100 million. The casino operator is also facing enormous penalties from the financial crimes watchdog, AUSTRAC, which has alleged Crown took $1 billion in revenue from “high-risk” VIP customers without proper anti-money-laundering controls.

In Sydney, meanwhile, Crown’s rival casino group, Star, is running into significant problems of its own, with an inquiry by the NSW regulator being told it should lose its casino licence over issues similar to those that bedevilled Crown.

New York-based private equity firm Blackstone is reaching the final stages of its $8.9 billion takeover of Crown, and the state regulators in Victoria, NSW and Western Australia must approve the deal before it can go ahead. It is essential that, no matter who owns the behemoth on the southern bank of the Yarra, gambling oversight in Victoria never returns to the bad old days when Crown Resorts brushed aside the regulator and carried on with impunity. The state’s watchdog may have taken a bite out of Crown, but we must make sure it maintains its aggressive stance.

Gay Alcorn sends a newsletter to subscribers each week. Sign up to receive her Note from the Editor.

Rep. Chip Roy gives ultimatum to GOP to vote no on NDAA unless 'daughter draft' is removed from legislation

Ikea restructured its stores for the future. After years of employee outcry, it's quietly walking back changes to make way for a new initiative