Crown Resorts' newly installed chairwoman Helen Coonan says the casino group's due diligence procedures are being "significantly improved", as it faces a rout in high-roller turnover triggered by revelations it partnered with junket tour operators linked to organised crime.

The James Packer-controlled company revealed a 34 per cent dive in VIP turnover in the six months to December 31, which drove a sharper than expected fall in underlying profitability. 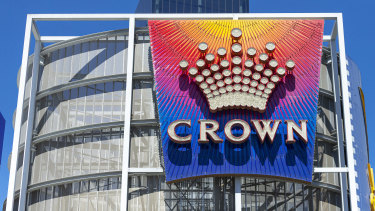 Crown’s gambling turnover fell 34 per cent to $13 billion, while group-wide normalised revenue was down 5 per cent to $1.4 billion.Credit:Daniel Pockett/Getty Images

Crown blamed the drop on weak high-roller market conditions and "negative publicity" stemming from revelations by this masthead the casino giant went into business with "junket"operators with links to organised crime in an effort to bring wealthy Chinese gamblers to its Australian casinos.

Those and other probity and regulatory issues will be examined by a NSW gambling regulator inquiry over the coming months.

Ms Coonan, a former Howard government minister who took over as chair from long-standing Packer-family lieutenant John Alexander in a reshuffle three weeks ago, said the company was taking steps in "recognition that everyone in this business can do better".

That included putting more senior managers in critical areas and bringing in experts to look at anti-money laundering controls. It has also hired former NSW deputy police commissioner Nick Kaldas to help with due diligence and communication with law enforcement agencies and regulators. 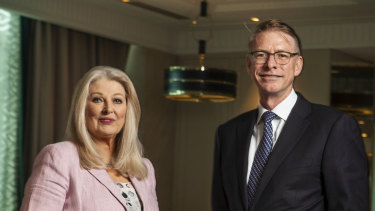 "That was then – whatever that was – and that will be the subject of the inquiry, and we are focused on the future of this very significantly improved scrutiny and due diligence around all of our business operations," Ms Coonan said.

Crown's new chief executive Ken Barton said pressure on its VIP business was compounded by the coronavirus outbreak and resulting China travel ban, but did not issue a trading update.

Mr Barton said the impact had also flowed onto its main gaming floor, as people avoided its casinos for fear of infection.

"The uncertainty of exposure in public places has probably meant that people are just being more cautious," he said.

Like other China-exposed stocks, Crown shares have fallen sharply as the coronavirus crisis spread. They closed flat at $11.76 on Wednesday.

Despite the challenges of the high-roller business, Mr Barton remained upbeat about the prospects for the VIP-only casino it is building in Sydney and which is due to open early next year, noting that the local high-roller market was a growing opportunity.

Using "normalised" figures – which applies a long-term win rate to its gambling turnover, to strip out the impact of lucky or unlucky streaks by its high-stakes customers – Crown reported an 11 per cent fall in net profit after tax to $173 million, below market expectations of $196 million.

On a statutory basis, including a more favourable than usual win rate in VIP gambling, Crown's net profit increased 25 per cent to $218 million.

Crown declared an interim dividend of 30¢, flat on the same period last year.

Shares closed down marginally at $11.76.

Does John Bolton's memoir undercut The Atlantic on Trump's canceled visit to US cemetery in France?