The board of Crown Resorts misled investors in a release to the market and newspaper advertisement last year that claimed its most infamous high-roller gambling partner, Suncity, was controlled by a regulated Hong Kong firm.

Crown’s chief legal officer Joshua Preston conceded to a NSW gaming commission inquiry last month that the claim Suncity was controlled by a Hong Kong Stock Exchange-listed company was incorrect. "The junket operations were not part of that listed company," he said.

Mr Preston said the junket partnership was actually with Alvin Chau Cheok Wa, who is the chairman of the listed company. Mr Chau was blocked from entering Australia last year due to his suspected links to organised crime and money laundering. 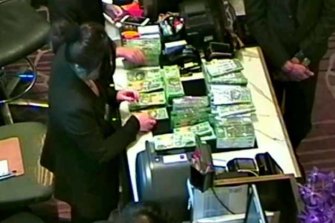 A large amount of cash being exchanged at Suncity’s private gaming room at Crown Melbourne.

The board put out the market release and advertisement on July 31, 2019 in response to a series of stories in The Age, The Sydney Morning Herald and 60 Minutes that pointed out that Crown casino's licensed junket operators had links to organised crime, drug and sex trafficking and money laundering.

Mr Preston said he and the board were made aware of errors in the statement in the days after the ASX announcement but they had not corrected it to his knowledge. It is unlawful for a listed company or its officers to provide materially false or misleading information to the Australian Stock Exchange. There is no suggestion the board intended the statement to be misleading.

A Crown source close to the board said the Melbourne-based casino group had been given inaccurate or misleading information by senior company managers prior to issuing the 2019 statement and that certain directors now regretted the decision to release it and the advertisement in response to the news reports. Crown did not respond to a formal request for comment.

Corporate records show high-stakes gamblers recruited through the Suncity junket laid down more than $2.3 billion at Crown Resorts' Melbourne and Perth casinos in the space of three months during 2015.

Also apparently contradicting the advertisement and statement, Mr Preston told the inquiry on Wednesday that Crown was still working with Zhou Qiyun, who operated the so-called “Chinatown junket” at Crown, and was now a representative of another junket along with four former Chinatown agents. Internal Crown documents show that the casino believed the Chinatown junket was financed by Tom “Mr Chinatown” Zhou, who was subject to an Interpol red notice for financial crime.

Mr Preston said he was "surprised" to learn about Crown’s ongoing relationship with the Chinatown agents but insisted it was not accurate to say Crown was still dealing with Chinatown itself. 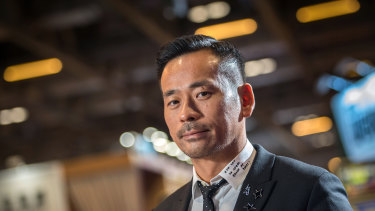 "It’s a very different relationship from a junket representative to a junket operator," he said.

Mr Preston said Crown also continued to work with a junket associated with the Neptune Group, which was also named in the media reports as having Triad links.

The Bergin inquiry was called by the NSW Independent Liquor and Gaming Authority after media reports revealed how Crown’s high-roller operations had partnered with suspected organised crime bosses, sex traffickers and money launderers to bring wealthy gamblers from China to Australia. The inquiry is reviewing Crown's probity to hold a licence for its new $2.4 billion hotel and casino nearing completion at Sydney's Barangaroo.

The inquiry has raised questions about Crown’s due diligence in partnering with Suncity. In the board’s ASX statement and advertisement Crown’s directors defended the firm's dealings with Suncity and its other high-roller partners and claimed its money laundering controls were rigorous and adequate.

The inquiry heard in August that Crown did not consider ending the partnership with Suncity even after it discovered $5.6 million in cash stored in a cupboard in the junket operator's private gaming parlour at Crown Melbourne, in an incident the casino's chief legal officer said sent "money-laundering alarms ringing".

The inquiry has also heard Crown received a due diligence report on Mr Chau in April 2016 that warned the US government considered him to be involved in organised crime, while a separate May 2016 dossier warned that he appeared to be a former member of the "14K Triad” in Macau under the leadership of notorious gangster Wan Kuok-koi, also known as “Broken Tooth Koi”.

A number of law enforcement investigations into Crown are running in parallel to the Bergin inquiry. In June 2017, the anti-money laundering agency AUSTRAC contacted Crown asking it to explain how it considered its partnership with Mr Chau to be appropriate.