Commonwealth Bank chairman Catherine Livingstone says Australia should aim to set a clear timeline to reopen its international borders, as she warned the country’s employers were facing a skills crisis.

Ms Livingstone also said leaders should aspire to scrap state border closures by the end of the year, with a focus on getting through the lockdowns and ramping up vaccinations in months ahead. 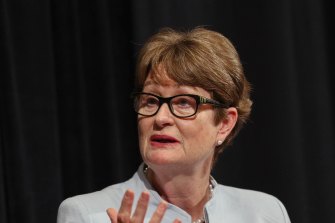 CBA chairman Catherine Livingstone: “The closed borders are not good for the country.”Credit:Dominic Lorrimer

Her comments came as Telstra chairman John Mullen took aim at political fighting between the states, saying it highlighted the challenges of Australia’s federal model.

As the latest lockdowns threaten to derail the economic recovery, Ms Livingstone on Wednesday said the country was better prepared to handle these lockdowns than it was last year. Even so, she said there should be a longer term ambition to reopen the country.

“It’s clear that the community is uncomfortable with the concept of just living with the Delta virus, so we’re trying to suppress it,” she told at an Australian Council of Superannuation Investors online conference.

“We do need vaccination rates. We do have a major problem that our international borders are closed, and all businesses are suffering with the inability to get the people they need. Whether it’s small business, large business… we are in a crisis point in terms of skills. We can’t get people to come to Australia because they’re worried about being locked in and trapped here,” she said.

“So, we really have a focus, let’s say to the end of the year: get vaccinated, live through these lockdowns, have the support from business and from government and have the aspiration that by the end of the year we should be in a position to not only have our state borders open but the international borders really on a timeline for opening from that point,” she said.

Ms Livingstone conceded political leaders were reluctant to nominate specific timelines because these were treated as firm commitments, but she said reopening should be the “ambition” of business, government and regulators. “The closed borders are not good for the country,” she said.

Her sentiments were backed by Zip Co chairman Diane Smith-Gander, who said governments should have more courage in their aspirations for managing the pandemic. “I think that now is the moment for a bigger aspiration, to really step in and say what is it that we should be doing to live with COVID in a COVID-safe way and to be able to keep our economy moving,” Ms Smith-Gander told the same event.

Telstra’s Mr Mullen, also speaking at the conference, said Australia had been a “victim of our own success” in managing the earlier parts of the pandemic, and took aim at the fighting between states over the management of the virus. He said this underlined the challenges of Australia’s federal system.

“I’m not trying to be too critical but I think we have seen a slightly unedifying spectacle of some state governments spending as much time scoring political points off each other as they have helping the populations and the economy,” Mr Mullen said.

He said the most severe damage from lockdowns would be inflicted on smaller businesses such as cafes, restaurants, and small retailers.

Ms Livingstone, who chairs the largest bank in Australia, said there was no doubt the lockdowns would cause “disruption and damage,” but the country was better prepared than last year, and there was a clear way out of the situation via vaccination.