The Conservative Political Action Committee announced Monday that it was canceling a scheduled speaker after it emerged that he made virulently anti-Semitic comments on Twitter.

“We have just learned that someone we invited to CPAC has expressed reprehensible views that have no home with our conference or our organization,” CPAC said in a tweet Monday. “The individual will not be participating at our conference.”

The identity of the speaker was confirmed by the journalist Ben Jacobs and other media outlets to be Young Pharoah, a rapper and activist.

Earlier, the progressive media-monitoring group Media Matters had published a report highlighting tweets in which Young Pharoah called Judaism a “complete lie” and “made up for political gain,” said that Jewish people are “thieving fake Jews.”

He also tweeted that “all the censorship & pedophilia on social media is being done by Israeli Jews.”

He had also promoted the QAnon and Pizzagate conspiracy theories, and claimed falsely that COVID-19 vaccines “alter your DNA.”

Critics were quick to point out the irony of the decision, with the theme of this year’s CPAC being “America Uncanceled.”

The theme refers to conservative attacks on “cancel culture,” or the deplatforming people found to have expressed racist or other bigoted views, which some Republicans say is an attack on freedom of speech.

Young Pharoah had been scheduled to speak at an event called “Please Check the Number and Dial Again: Doubt, Dysfunction, and the Price of Missed Opportunities.”

He is no longer listed as a speaker on the CPAC website, but Media Matters reported that before removing his profile the conference had linked to his Twitter account and website, where he pushed the conspiracy theories.

In response to his appearance being canceled, Young Pharaoh tweeted: “This is censorship at its best.” 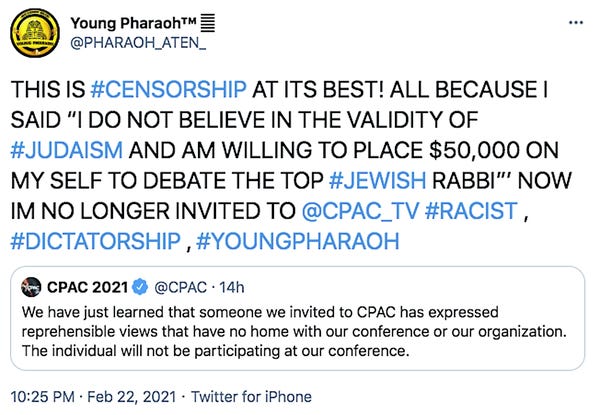 Earlier, CPAC organizer Matt Schlapp had touted in an appearance on Newsmax former President Donald Trump’s appearance at the event and the theme of the conference.

“Our theme is ‘America Uncanceled,'” he told the right-wing news network “And what a perfect way to demonstrate the grossness of our cancel culture than having Donald Trump speak.”

CPAC, which this year is taking place in Orlando, Florida, will start on Thursday and end Sunday. Trump is the keynote speaker, and a series of his administration’s cabinet members, conservative media stars, and activists are also scheduled to speak.