The Black unemployment rate was 16.7% in April, compared with 14.2% for white workers. Expect those numbers to get worse on Friday morning, when the Department of Labor will release its data for May. Overall, the jobless rate is expected to hit a new high ― perhaps touching 20%, according to some estimates. For Black workers, the latest figures will almost assuredly be higher.

Of course, a lot of Americans are out of work now. The crucial difference for Black Americans is their safety net ― or lack thereof. At every level, Black Americans have less of a cushion to fall back on during a time of economic stress.

“Institutional racism and historical discrimination have meant that Black workers have fared worse in the labor market, even in good times,” said Elise Gould, a senior economist at the progressive Economic Policy Institute who co-authored a report this week looking at the devastating toll COVID-19 has taken on Black workers.

“When we have a severe economic downturn like we’re having right now, it disproportionately disadvantages Black workers,” she added. “They’re the ones more likely to lose their jobs, but they’re also the ones less able to weather the storm.”

The economic devastation is coming not only during the pandemic but also at a time of massive social unrest over the brutal way the police treat Black Americans, setting up a crisis of staggering proportions.

“Job loss for those living at such low incomes is absolutely shattering,” Gould and her co-author, Valerie Wilson, write in their report. 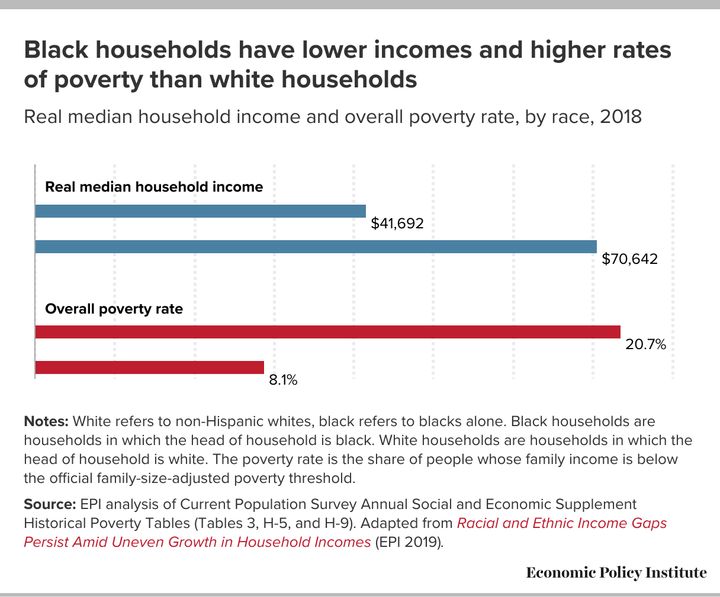 Then there’s also a massive racial wealth gap — the legacy of racial discrimination embedded into U.S. policy going back to slavery, through Reconstruction and the New Deal, which essentially only benefitted whites.

“It rewrote our economy from scratch basically, and Blacks were completely left out,” said Mehrsa Baradaran, a law professor at the University of California, Irvine who has closely studied the wealth gap.

White families hold five times as much in liquid assets like savings accounts, a home, stocks, bonds as Black families, the EPI report points out: $49,529 versus $8,762.

In 1863, the Black community owned 0.5% of all the wealth in the U.S. ― think homes, property, stocks, cash savings. That might have made more sense 157 years ago because enslaved people weren’t allowed to own anything, but it doesn’t now. And the number today is around 1%, Baradaran wrote in her 2017 book “The Color of Money.”

It is worth pausing here to sit with that number: More than a century and a half after emancipation, the percentage of wealth owned by Black Americans increased by just one-half of a percentage point. Considering that wealth confers power in the U.S., that number says a lot.

People Who Still Have Jobs Are Also Struggling

Meanwhile, Black Americans who are still employed are more likely to be in front-line jobs at high risk of exposure to the coronavirus, the EPI report notes. And those jobs are typically lower-paying with little or no benefits.

Reports of Walmart workers, grocery store clerks, Amazon warehouse workers and meatpacking plant employees contracting and dying from COVID-19 have been all over the news.

The health effects of COVID-19 have also been worse for Black Americans, who are dying at nearly twice the rate of white people.

“Sociologists and epidemiologists say that nearly every condition that increases patients’ vulnerability to coronavirus — from asthma to diabetes to HIV — appears at higher rates in the Black population,” HuffPost’s Michael Hobbes wrote in April.

The weak safety net and the likelihood of Black Americans to be unable to shelter at home also play a role here. Black workers are 60% less likely to have health insurance, EPI’s report notes. They’re also less likely to have paid sick days or to be able to work from home.

Black women in particular are in a really precarious spot. They’re more likely than white women to be the sole breadwinner at home with young children ― 14.4% of Black women are in that situation, compared with 4% of white women, EPI points out. That’s meant many have had to leave the workforce amid school and day care closures caused by coronavirus. 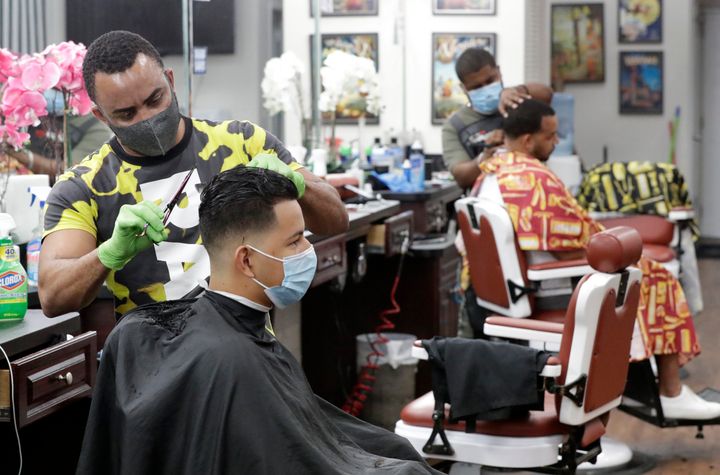 The Recovery Will Be Slower

As the country “opens back up,” any kind of recovery will be slower for Black workers.

It’s likely that the last jobs to come back will be those in higher-risk, high-touch sectors ― such as restaurants and nail salons ― where customers might be reluctant to return right away. And those jobs are disproportionately held by workers of color, notes a report released Thursday from the National Equity Atlas and PolicyLink, which took a granular look at the job listings to find the occupations most impacted by the downturn.

According to the report, 43% of white workers are in the kind of higher-risk, nonessential jobs that will be slower to come back, compared with 52% of Black workers and 57% of Latinx workers.

The fact that Black Americans would struggle more in a public health crisis like COVID-19 could have been planned for. But so far, policy solutions haven’t grappled with the racial disparities of COVID-19.

The $1,200 stimulus checks are just one example. They were a quick windfall for those with bank accounts, as the federal government was able to instantly deposit the money. But for those without accounts, the wait was longer — and is possibly still going on. A shocking 12% of Black households are unbanked, compared to 3% of white.

Increased unemployment benefits are also harder to get, especially for the lowest-paid workers, like tipped minimum wage workers or those who are working off the books. Women of color are particularly suffering here.

The small business loan program created as part of the CARES Act also sent less help to Black businesses, according to one survey released last month.

None of this should be surprising, Langston said.

“Those inequities are no accident. They follow the fault lines of systemic racism in our economy,” she said. “People of color were already more likely to be excluded from the economy and the pandemic just exacerbated that.”