In light of recent revelations that Donald Trump knowingly downplayed the severity of the coronavirus pandemic, Joe Biden’s campaign is again relying on the voice of Kristin Urquiza, who rose to national prominence after delivering a speech during the Democratic National Convention about her Trump-supporting father dying of COVID-19.

“That betrayal of my father and our country is even more clear now,” Urquiza told members of the press in a call organized by the Biden campaign Thursday. “If Donald Trump had told the public what he had told Bob Woodward in private, thousands of lives could have been spared including my dad’s.”

Excerpts of investigative reporter Bob Woodward’s forthcoming book, “Rage,” were published in The Washington Post this week, including quotes from Trump in February confirming that he knew the virus was highly contagious, airborne and “more deadly than even your strenuous flus.” During this time, Trump repeatedly told the public the opposite, repeatedly saying the illness would quickly go away and equating it to the regular flu.

As of this week, more than 190,000 Americans have died of the coronavirus. Trump has acknowledged making these comments to Woodward in February and defended them to Fox News, saying he didn’t want to “scare people.”

“I’m the leader of the country, I can’t be jumping up and down and scaring people,” Trump told Sean Hannity. “I don’t want to scare people. I want people not to panic, and that’s exactly what I did.”

That was little consolation for Urquiza, who made headlines during the DNC when she said her late father’s only “preexisting condition was trusting Donald Trump.” 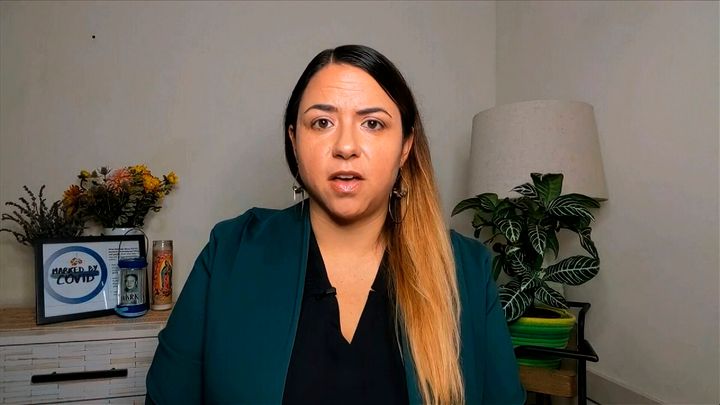 “Sure, my dad did not panic, but instead he died,” Urquiza said Thursday. “I’d much rather have dealt with a father who was a little scared versus one that was led to his death.”

The Biden campaign has repeatedly made the case that Biden was ahead of the president on the seriousness of the virus. Biden wrote an opinion piece in January warning that Trump was unprepared to handle a coronavirus outbreak in the United States.

“To be blunt, I am concerned that the Trump administration’s shortsighted policies have left us unprepared for a dangerous epidemic that will come sooner or later,” Biden wrote then. His campaign stopped holding major events and rallies in March.

It wasn’t just Trump’s rhetoric that was downplaying the virus. The United States on the whole was slow in its response to the pandemic. It wasn’t until mid-March that Trump publicly recognized the pandemic was not going to just disappear, despite repeated warnings from intelligence officers and foreign officials in January. For months, Americans found it difficult to get tested for the virus unless they were visibly very ill.

Trump in June told officials to slow down testing to make it appear that the United States had fewer cases. As recently as August, public health officials have said the country is not doing enough testing or contact tracing to properly contain the virus.

“What we heard on that tape is the definition of Trump’s phony populism,” Sen. Sherrod Brown (D-Ohio) said on the Biden campaign press call. “He was more worried about his own poll numbers and his wealthy friends’ stock portfolios than he was about saving American lives. He was warned about this virus and he didn’t do a damn thing.”

Brown wasn’t optimistic, however, as to whether this new revelation would change Senate Republicans’ views of the president.

“I can’t explain the spinelessness of my colleagues,” Brown said.