A Georgia city did not violate the constitutional rights of a Sons of Confederate Veterans group when it banned the Confederate battle flag from its annual parade honoring veterans of American wars, a federal appeals court ruled Tuesday.

Richard Leake and Michael Dean sued Alpharetta, an Atlanta suburb, in August 2019 after city officials said the Sons of Confederate Veterans could participate in the annual Old Soldiers Day Parade but could not display the battle flag. The federal civil rights lawsuit accused the city of violating the group's right to free speech under the First and Fourteenth Amendments.

U.S. District Judge William Ray in June 2020 ruled in favor of the city, finding that the parade amounted to government speech. Leake and Dean appealed to the 11th U.S. Circuit Court of Appeals. A three-judge panel of the appeals court heard arguments in the case on Friday and on Tuesday issued an opinion upholding the lower court's ruling.

"Because governments are not obliged under the First and Fourteenth Amendments to permit the presence of a rebellious army's battle flag in the pro-veterans parades that they fund and organize, we affirm," Circuit Chief Judge William Pryor wrote in the opinion.

The battle emblem, which has a red background topped by a blue X with 13 white stars, has been condemned and removed along with other symbols of the Confederacy amid protests against racial injustice. In 2020, Mississippi dropped its Confederate-themed flag and, elsewhere, monuments to Southern figures, including Robert E. Lee, have come down.

While the city of Alpharetta emerged victorious Tuesday, the dispute ultimately led city officials to end the parade.

Reached by phone Tuesday, Leake said he hadn't seen the 11th Circuit opinion and wouldn't have any comment if he had. Dean couldn't be reached. Kyle King, a lawyer, for the pair said in an email that he had been in court Tuesday and wasn't in a position to offer meaningful comment. Alpharetta Assistant City Administrator James Drinkard said in an email that the city doesn't comment on matters pending in court.

Pryor detailed the history of the dispute in the opinion:

Alpharetta started the Old Soldiers Day Parade after the Civil War to honor veterans of that war, but stopped holding it a few years later. The parade resumed in 1952 at the prompting of a group of residents who wanted to recognize local veterans, and the city had sponsored it every year since.

STATUE OF CONFEDERATE ROBERT E. LEE TAKEN DOWN IN VIRGINIA

Leake, a member of the Roswell Mills Camp Sons of Confederate Veterans, completed an application in July 2019 for the group to participate in the parade about a month later on Aug. 3. The application said the group would have a truck pulling a trailer with participants holding unit flags. Leake described the organization as being "dedicated to preserving the memory of our ancestors who served in the War Between the States and ensuring that the Southern view of that conflict is preserved." 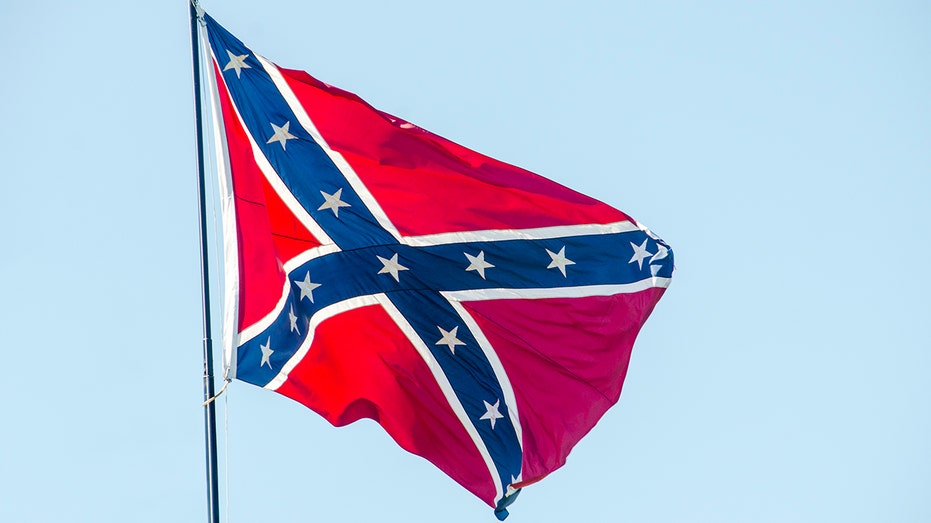 Confederate Flag Blowing in the Wind against a Blue Sky

The city promoted the parade on its website as aiming to "celebrate and honor all war veterans, especially those from Alpharetta, who have defended the rights and freedoms enjoyed by everyone in the United States of America."

Drinkard, the assistant city administrator, responded to the application saying that the parade aimed to unite the community and celebrate American war veterans and raised concerns about the participation of an organization devoted only to honoring Confederate soldiers. The letter said, "the Confederate Battle Flag has become a divisive symbol that a large portion of our citizens see as symbolizing oppression and slavery." That divisiveness would detract from the goals of the parade and the city, supported by the mayor, had decided not to allow the Confederate battle flag to be displayed in the parade.

The letter said the Sons of Confederate Veterans could participate without the flag and would also have to agree not to do anything "that would detract from the event goal of uniting our community for the purpose of celebrating American war veterans."

Three days before the parade, Leake and Dean sued city officials. They sought monetary damages for the violation of their rights and also sought a court order to allow them to participate in the parade with the Confederate battle flag that year and in the future.

The parade took place as planned. The Sons of Confederate Veterans group did not participate, and instead their sympathizers flew the Confederate battle flag along the parade route.

A few months later, in December 2019, the Alpharetta City Council voted to stop using taxpayer money to fund the Old Soldiers Day Parade, effectively ending it. Alpharetta is a city of more than 57,000 people located about 25 miles (40 kilometers) north of downtown Atlanta.