Former Secretary of State Condoleezza Rice said Tuesday the "problem with the left" is liberals assume how Black people should think.

The prominent African American Republican told the Aspen Security Forum that she doesn't think the United States will ever be a truly colorblind society, but she hopes that one day people will stop making assumptions based on race.

"I don't really care if we're colorblind, but I would like to get to the place that when you see somebody who is Black, you don't have preconceived notions of what they're capable of, who they are — by the way, what they think, which is I think a problem of the left," Rice said in a video interview with The New York Times' Peter Baker at the forum. "You look at somebody who's Black and you think you know what they think, or you at least think you know what they ought to think."

Biden later walked back the comments, saying he was being a "wise guy."

Rice, who served in President George W. Bush's administration, first as national security adviser, took the jab at the left while speaking about the "birth defect" of slavery that she says still has an impact today in American inequities in education, policing and economic opportunities. 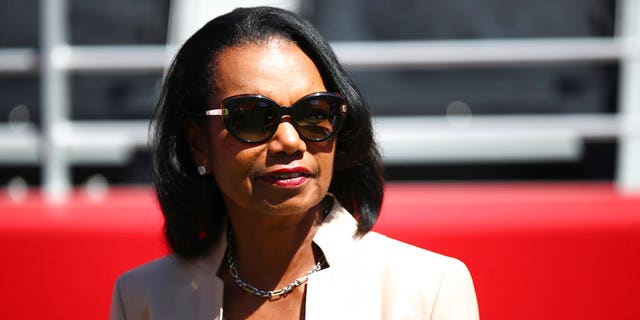 Sept. 16, 2018: Former Secretary of State Condoleezza Rice stands on the sidelines before the start of an NFL football game between the San Francisco 49ers and the Detroit Lions in Santa Clara, Calif. (AP Photo/Ben Margot)

Rice said widespread school choice is necessary to tackle persistent education gaps that often leave poor, minority students in failing public schools while their wealthy peers have the money to send their children to private schools or move to a desirable school district.

"I am not one who believes you can just sort of 'take on systemic racism,' I don't even know how to start," Rice said. "I do think you can take on the impact of an educational system for minority kids that leaves most of them behind. I think you can take that on. But people might not like my answer. My answer is: Let's do school choice in a big way."

Rice also spoke out in support of removing Confederate monuments and renaming some military bases — efforts that have gained steam in the wake of nationwide protests following the death of George Floyd in Minneapolis while in police custody. She urged President Trump to support a defense authorization bill that would force the name changes of bases such as Fort Bragg in North Carolina and Fort Hood in Texas. The White House has threatened a veto. 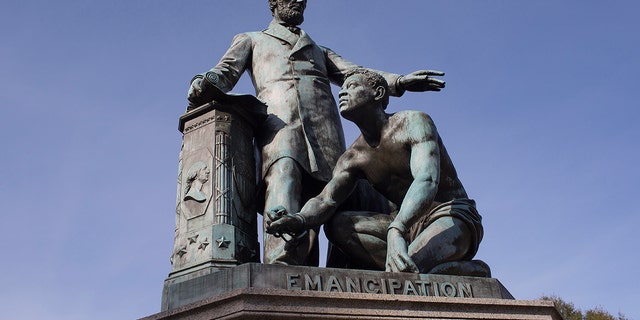 WASHINGTON, D.C. – NOVEMBER 11: The Lincoln Emancipation Statue sits in Lincoln Park on November 11, 2017 in Washington D.C.’s Capital Hill neighborhood. Paid for by former slaves and placed in the park in 1876, the statue depicts racial attitudes of the 19th century from a northern perspective. (Photo by Andrew Lichtenstein/Corbis via Getty Images)

But Rice also drew a line and said the takedown of monuments can go too far, such as an effort to remove the Emancipation Memorial in Washington, D.C., that depicts a freed slave kneeling before former President Abraham Lincoln.

"I actually don't know why anybody wants to defend the Confederacy and Confederate monuments," Rice said. "I also don't know why anybody wants to tear down a statue of Abraham Lincoln and slaves, which was actually funded by freed slaves. So this has gotten a little out of control, frankly, and I don't want to be the Soviet Union where we're trying to erase history."

Latest Posts
‘Jack Ryan’ VFX Outfit Goodbye Kansas Launches Production Arm Infinite Entertainment With Slate & Presence In LA, London & Stockholm
Treasury rejects theory ‘eat out to help out’ caused rise in Covid
Trump Deposition to Be Sought in McCabe Suit Over FBI Firing
The best coffee grinders
US Banking Digital Trust Study: Which US banks have the highest levels of digital trust among consumers
Recent Posts
This website uses cookies to improve your user experience and to provide you with advertisements that are relevant to your interests. By continuing to browse the site you are agreeing to our use of cookies.Ok