Despite a murky result marred by a costly wage underpayment saga, grocery king Woolworths managed to deliver a solid showing across its divisions, including historically troubled department store Big W.

Yet shares in the retailer dropped 2.7 per cent to $40.73 on Wednesday, as investors raised concerns over remediation-fuelled losses and comparable sales figures which suggested the company might be losing ground to rival Coles. 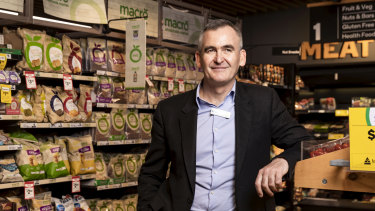 Woolworths CEO Brad Banducci said he “didn’t want to overplay” the effect of the coronavirus.Credit:Dominic Lorrimer

As expected, the company reported $32.4 billion in revenue for the half and net profit (after significant items were excluded and the impact of a new accounting standard was discounted) matched analyst expectations at $1.36 billion for the half.

However, the company's statutory results were hurt by $131 million in one-off costs, including an $80 million provision for worker remediation following the company's admission of a mammoth underpayment scandal last October.

This drove group net profit after tax down 7.7 per cent to $887 million, with additional costs expected as the retailer revealed the estimated hit from remediation had blown out to $315 million, with ongoing annual remediation costs increasing by about $10 million to between $35 million and $45 million.

Investors were unimpressed with this increase, with executives copping an earful from Bank of America analyst David Errington over the scale of the underpayment scandal when compared to similar issues at Coles and Wesfarmers.

"You have had a systematic underpayment of staff to the magnitude of nearly half a billion dollars. You owe us as shareholders to explain how that happened," Mr Errington said.

Away from the underpayments scandal, investors and market watchers were broadly impressed with the supermarket's performance, which beat expectations in some areas and revealed earnings growth across all five of its divisions

Big W was a standout performer in the results, with the company managing to drag the department store into the black for the first time since 2016, posting $50 million in earnings before interest and tax for the half compared to an $8 million loss in the prior corresponding half.

Comparable sales at Woolworths' soon to be demerged Endeavour Drinks division grew 1.7 per cent and EBIT increased 6.7 per cent to $338 million, helped by growth in the company's own-brand liquor division Pinnacle.

However, analysts raised concerns the company could be losing ground to rival Coles, as comparable sales for the company's key food division were up 5.1 per cent for the half, falling short of analyst expectations of 5.6 per cent growth.

Second-quarter comparable growth was 3.8 per cent, just edging out Coles' 3.6 per cent growth, the lowest margin of outperformance since the 2017 financial year, excluding the first quarter of 2019, when collectables fuelled a massive 5.1 per cent jump in Coles' sales.

Jefferies analysts said food sales were "disappointing in the context of Coles", noting the gap had closed between the two. Woolworths' comparable sales growth of 2 per cent for the first seven weeks of the second half also appeared to be underperforming Coles, which said its comparable sales for the new year were around 3.6 per cent.

Mr Culbert said it appeared Coles had gotten off to a stronger start in the new year, but cautioned extrapolating too much from the short-term numbers.

"We are starting to see a bit of softness there, though I wouldn't like to overplay it," he said.

But broadly, the company had limited worries over the virus outbreak, saying the only stock shortages in-store currently were for hand sanitizers and wet wipes, though packaging for some products could see an impact.

"Our exposure is mainly packaging for food rather than food itself," he said. "We have other sources, including in Australia, we can look at for food."

Woolworths announced an interim dividend of 46¢ a share, up from 45¢ in the prior corresponding half, payable April 9.

Mind-blowing optical illusion reveals how easily your eyes are tricked – can you see the TRUE colours?