Shares of Luckin Coffee sank more than 80 per cent on Thursday after the Chinese coffee chain said an internal investigation had shown that its chief operating officer and other employees allegedly fabricated sales transactions.

The company suspended COO Jian Liu and employees reporting to him following initial recommendations from a special committee, which was appointed to investigate issues in its financial statements for the fiscal year ended December 31, 2019. 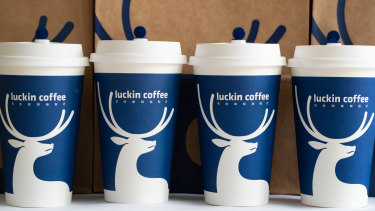 Luckin said the investigation had found that fabricated sales from the second quarter of 2019 to the fourth were about 2.2 billion yuanCredit:Alamy

Luckin said the investigation had found that fabricated sales from the second quarter of 2019 to the fourth were about 2.2 billion yuan ($510 million). That equates to about 40 per cent of the annual sales projected by analysts, according to Refinitiv IBES data.

Liu has been the COO of the company, which competes with Starbucks in China, since May 2018.

Luckin had been one of China's few successful initial public offerings last year, with a number of prominent US investors, including hedge funds, investing in the company's shares.

However, investors said they were beginning to hear rumblings that there was something amiss at the company and some received an anonymous report alleging that the company was fabricating some numbers.

Earlier this year, short-seller Muddy Waters Research shorted the stock, citing a report alleging that Luckin fabricated financial and operating numbers from the third quarter of 2019.

At the time, Luckin called the report's methodology flawed, the evidence unsubstantiated and said that the allegations were "unsupported speculations and malicious interpretations of event."

"We believed this report was credible when we read it, and that's why we took a position. This is again a wake-up call for US policymakers, regulators, and investors about the extreme fraud risk China-based companies pose to our markets," Muddy Waters said in an e-mailed statement on Thursday.

"Luckin shows exactly why we need short sellers in the market."

The funds who invested in Luckin, including Point72 Asset Management, formerly known as S.A.C. Capital Advisors, declined to comment.

Shares of the company on the Nasdaq closed 76 per cent lower at $US6.40.

Luckin asked investors not to rely on its financial statements and earning releases for the nine months ended September 30 and the two quarters starting April and July 2019.

What is Citizen? The controversial app for safety alerts and crime tracking, explained