Hundreds of individuals who participated in widespread looting and vandalism across downtown Chicago early Monday engaged in “abject criminal behavior” and were not part of an organized protest, the city’s mayor said.

Dozens of stores, banks and other businesses were broken into and burglarized. More than 100 people were arrested and at least 13 officers were injured, according to police.

Democratic Mayor Lori Lightfoot described the overnight chaos as an “assault on our city,” and called on Illinois’ criminal justice system to hold those involved accountable.

“This had nothing to do with legitimate, protected First Amendment expression,” Lightfoot said during a news conference Monday morning. “What occurred in our downtown and surrounding communities was abject criminal behavior, pure and simple.”

“These were not poor people engaged in petty theft to feed themselves and their families,” she added. “This was straight-up felony criminal conduct.”

Video captured by local reporters and bystanders showed people breaking windows to enter and burglarize various stores, including a Nordstrom, Best Buy, Pandora and 7-Eleven. Some individuals who participated in the looting could be seen piling into cars with stolen goods and fleeing the scene.

Photos of the vandalism showed anti-police graffiti in some areas.

Authorities believe the looting may be connected to an officer-involved shooting that occurred in the city’s Englewood neighborhood on Sunday afternoon, Chicago Police Superintendent Dan Brown said during the news conference Monday.

Following the shooting, there was a “very intense interaction” between police at the scene and a crowd that had gathered nearby, Brown said.

Social media posts shared in the wake of the shooting encouraged people to loot downtown later that night, Brown said. Police dispatched about 400 officers to the areas expected to be targeted. 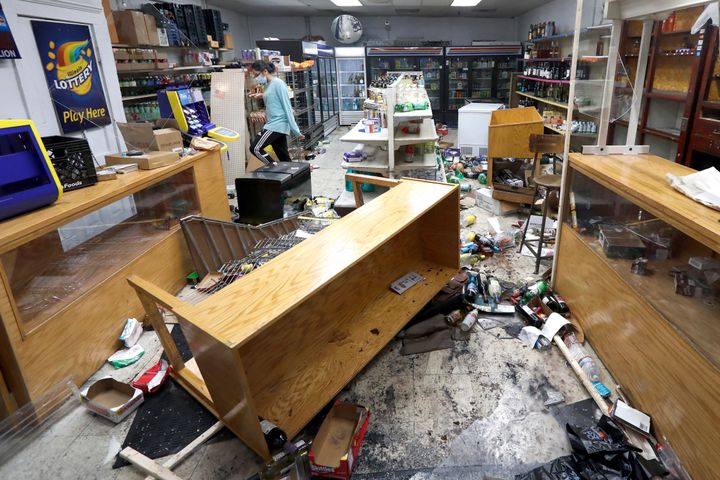 Some of the stores damaged overnight were still in the process of recovering from looting that occurred during the nationwide anti-racism protests following the death of George Floyd in police custody in May.

But city officials rejected any suggestions that the most recent looting was part of a similar protest. Brown said what unfolded was “pure criminality” and “violence against police.”

“Criminals took to the streets with confidence that there would be no consequences for their actions,” he said. “I for one refuse to allow these cowardly acts to hold our city hostage.”

At one point early Monday, shots were fired at officers from a passing vehicle while they were arresting suspected looters downtown, police said. Officers returned fire, Brown said. No officers were injured. It wasn’t immediately clear if anyone inside the vehicle was struck by gunfire.

As the unrest unfolded overnight, authorities tried to cut off access to the downtown area by closing streets, raising bridges and asking the Chicago Transit Authority to halt service. By late Monday morning, CTA service had resumed and bridges were lowered. Some streets remained closed.

Downtown access will be restricted from 8 p.m. to 6 a.m. until further notice, and there will be an increased police presence in the area, Brown said during the news conference Monday morning.

Chicago, which has long suffered from gang-related violence, has seen a surge in murders and shootings in recent months.

While overall crime decreased last month compared to July 2019, shootings increased 75%, jumping from 232 reported in July 2019 to 406 reported last month, according to data released by the Chicago police.

There were at least 31 shooting incidents, including three homicides, in Chicago this past weekend, Brown said Monday.

Rumors circulated that the unrest was sparked by the police killing of a 15-year-old boy on Sunday, but officials denied such claims, calling them “blatant misinformation.” The origin of this unsubstantiated theory is unclear.

General distrust of police forces nationwide has grown since Floyd’s death and the police killing of Breonna Taylor, a 26-year-old Black woman, earlier this year.

Police fatally shot Taylor in her Louisville, Kentucky, home in March after obtaining a “no-knock” search warrant linked to a drug investigation involving a suspect whom police believed was using her address. The police report from the incident listed the injuries sustained by Taylor as “none,” even though she was shot at least eight times.

Need a job? There's an app for that