The folks at Blackstone are hoping for third time lucky in their attempts to woo James Packer and the board of Crown Resorts to accept a takeover for the troubled casino group.

A betting person would say odds are stacked against Blackstone getting support for its latest $12.50-a-share bid.

The timing of Blackstone’s attempt is cute and clever – moving on Crown at a time when the only other contender, Star Entertainment, has been caught with its regulatory pants down, making it difficult to get in the Crown ownership competition. 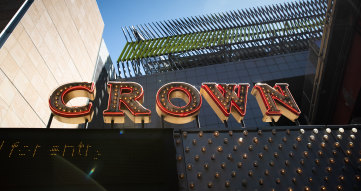 The timing of Blackstone’s latest offer for Crown is cute and clever. Credit:Jason South

Star is facing its own public regulatory hearing early next year, the outcome of which is uncertain. Over the past couple of months it has been busy defending itself against media reports that its record on anti-money laundering and junkets was also problematic.

One shouldn’t completely rule out Star crashing the Crown/Blackstone party. If the Sydney-based casino operator believes the company and its board will come through the NSW regulator’s inquiry and the current Austrac investigation, it might place its head above the parapet.

Star would also need to get the approval of the gun-shy Victorian regulator to get any offer for Crown over the line.

But it would be a company-altering moment for Star to merge with Crown, and a missed opportunity if it felt unable to play a role.

Much as Crown was happy to have Star’s company in the regulatory sin bin, if Star is a no-show at the auction it also creates a problem for Crown, which needs to have some competitive tension in the room to maximise the offer price.

That said, the Blackstone offer should be good enough to force Crown to engage in the process.

It now needs to use the private equity fund’s offer as a launching pad to bring other parties into the game.

Crown would be thinking that Blackstone’s offer of $12.50 a share is not sufficiently above its previous bid of $12.35 to reflect the new regulatory certainty it has since the Victorian Royal Commission found the company unsuitable to hold a casino licence, but let it hold on to it anyway.

The fact that this is Blackstone’s third attempt to buy Crown is testament to its desire and its confidence that there is money to be made.

And since May, when Blackstone made its previous offer, Crown has also edged closer to getting the approvals needed to open its Sydney casino.

The additional challenge for any Crown bidder is that it must overcome two valuation hurdles – what the board thinks the company is worth, and what Packer is prepared to accept for his 38 per cent holding.

Normally, a shareholder with this level of ownership would already dominate the board, and of course this used to be the case at Crown.

Packer’s divorce from the company means Blackstone can’t rely on there being any alignment between the board and the major shareholders. 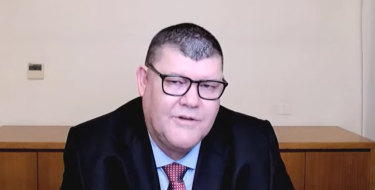 James Packer will play kingmaker in the battle for Crown.

It has been speculated on many occasions that Packer wants to see the offer price begin with $13. So any hopes Blackstone has that this cash offer will be done and dusted by early next year appear to be premature.

The share price response to the Blackstone offer didn’t reflect confidence that it would be successful. Crown’s shares shot up 16 per cent to $11.50 – well shy of the offer price, which itself is below the $13.08 which the stock was trading at in May.

Blackstone could reasonably argue that Crown’s earnings potential has been negatively affected by the more stringent regulatory conditions imposed by the Victorian Royal Commission, and its revenue will be downgraded by being unable to deal with junkets that organise the international VIP player market.

Thus, Crown’s profit levels need to be rebased to reflect that. On the positive side it will almost certainly get the thumbs up to open in Sydney next year – which will be a new source of earnings.

The fact that this is Blackstone’s third attempt to buy Crown is testament to its desire and its confidence that there is money to be made.

It’s time for the Crown board to scour the market for other potential interested parties and get an auction going.

Property boom: The town where house prices have risen 48 percent in a year