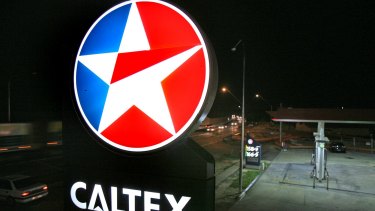 Caltex on Thursday revealed underlying weakness in national retail fuel and refining margins had contributed to a 38 per cent fall in its full-year profit.Credit:Sasha Woolley

In a statement, the company said the bidding war between the two parties had hindered efforts by Caltex's board to complete its search for a replacement to its long-running chief executive, Julian Segal.

"The Board recognises the critical importance of CEO succession and we have made significant progress in our search over the last six months," Caltex chairman Steven Gregg said.

"However, given our recent announcements regarding the receipt of revised and new proposals to acquire Caltex, it is not possible for us to complete this search at this time."

Mr Gregg said the interim appointments would ensure Caltex could "continue to engage with interested parties on a potential transaction, while continuing to execute our strategy."

The bidding war for Caltex escalated last week when the company revealed EG Group had submitted an indicative offer to acquire all of its shares under a scheme of arrangement which would split up the company. The offer includes $3.9 billion in cash for Caltex’s network of stores and shares in a new entity, tentatively called Ampol, which would control the fuel and infrastructure business and the group’s international trading and shipping operations.

Convenience store giant Couche-Tard, which means "night owl" in French, is carrying out non-exclusive due diligence after submitting a revised $8.8 billion cash offer. Caltex in December rejected an initial unsolicited $34.50-a-share offer from Couche-Tard, saying the bid undervalued the company.

Caltex's full-year accounts, released on Tuesday, showed its profit on a "replacement cost" basis was $344 million, slightly above the midpoint of its forecast of between $320 million and $360 million.

In a statement about the CEO transition, the Caltex board said Mr Halliday had significant ASX-listed company experience and had held senior finance and commercial roles in Australia and overseas. As well as playing a "key role" in response to approaches from Caltex's foreign suitors, Mr Halliday had led major strategic initiatives at Caltex over the last 12 months, including the ongoing retail network review and proposed proposed property IPO, Mr Gregg said.

"Matthew’s ASX-listed company experience and knowledge of mergers and acquisitions, capital management and transformation make him the ideal candidate to lead Caltex at this time," Mr Gregg said.

Ben Wilson, an oil and gas analyst with the Royal Bank of Canada, said the bid from EG Group had "sufficient merit" and Caltex may permit the company access to conduct due diligence alongside Couche-Tarde, raising the prospect of Couche returning with an even higher offer.

"We think at this stage Couche remains in the box seat," Mr Wilson said. "But this situation looks to have plenty left in it to run."

With Caltex's "back stop" of two bids, Mr Wilson said RBC Capital Markets viewed the stock as a "good place to be amid volatile equity markets".

Caltex said shareholders would be paid a final dividend of 51¢ a share.