The messaging wasn’t the work of a social media manager going rogue. It’s tied to the chain’s Monday launch of a new initiative to help narrow the gap of women in head chef roles, but the messaging struck people on Twitter and Facebook the wrong way. 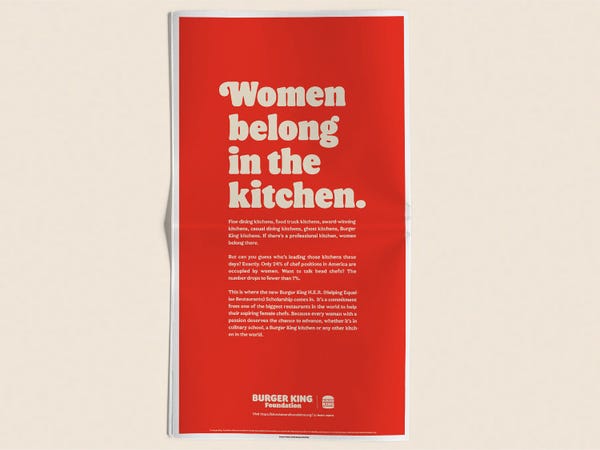 Some expressed the tweet was tone-deaf on a day meant to celebrate women; others said they wouldn’t eat at the restaurant anymore, and others joked at how the fast-food chain’s marketing team thought the message would be a good idea.

One of Burger King’s competitors criticized the word choice. A Twitter account associated with KFC said Burger King should have deleted the tweet after sending it. The restaurant replied, “Why would we delete a tweet that’s drawing attention to a huge lack of female representation in our industry.”

Gender stereotypes are still alive today. In fact, people are even more likely to believe in traditional “female” roles, like cooking and cleaning, in today’s world as they were decades ago, according to a 2016 report from Women’s Health Magazine.

In her own response to the tweet, Chelsea Peretti, a comedian and actress from “Brooklyn Nine-Nine,” said “Burger King belongs in a trashcan.” Another unverified tweeter said the same thing. Still, the Burger King UK account added 10,000 followers Monday following the tweet.

On Facebook, people largely reacted with the laughing emoji. Several commenters said those who didn’t find it funny were soft, and others said there should have been a better way to promote the new initiative.

The fast-food chain said it’s creating the Burger King Helping Equalize Restaurants, HER, scholarship to support female team members pursuing a degree in culinary arts. “This is a start in doing our small part to help women in the culinary field achieve their ultimate goal,” the company said in a press release, adding that women occupy only 7% of head chef positions in restaurants.

More than half of culinary graduates are women, but just 20% of working chefs are women, according to a 2019 story from Eater.com that cited US Labor Department statistics. The median pay for a chef was about $51,000 in 2019, data from the Bureau of Labor Statistics show.