At Berkshire Hathaway, 2019 was another good year — and an opportunity for its leader, Warren Buffett, to prepare his company for life without him. 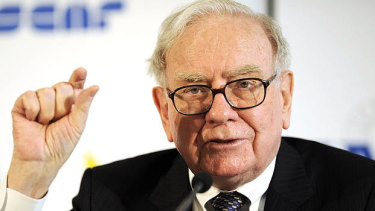 In his latest letter to investors, published Saturday morning, the billionaire largely praised the performance of his $566-billion conglomerate, whose portfolio includes the insurer Geico, the chemical-maker Lubrizol, Fruit of the Loom underwear and more.

"Our unrivaled mountain of capital, abundance of cash, and a huge and diverse stream of noninsurance earnings allow us far more investment flexibility than is generally available to other companies in the industry," he wrote.

The annual report was accompanied by the latest assessment of Berkshire's financial health: The company reported $29 billion in net income for the fourth quarter of 2019 and $81.4 billion for last year overall. Operating earnings, Buffett's preferred measure of financial performance, declined slightly last year from 2018, to $24 billion.

In a further show of belief in his company's value, Buffett said that Berkshire spent $5 billion buying back its own stock last year. But investors have hoped that the company would spend more on stock repurchases since loosening its policy on such moves in 2018.

Much of Saturday's letter served up a sort of greatest hits for fans of Buffett — investors around the world who hang onto his pronouncements as America's favourite capitalist uncle.

There were quips, like one comparing corporate acquisitions to marriages that start with "a joyful wedding — but then reality tends to diverge from prenuptial expectations."

There was the complaint that Berkshire, with a $128-billion cash hoard that Buffett wants to spend on big acquisitions, did not have great opportunities to do so. (Missing from action this year was his favourite description of that cash pile, "elephant gun.")

Instead, Buffett wrote, "The fickle stock market serves up opportunities for us to buy large, but noncontrolling, positions in publicly traded companies that meet our standards." That currently includes a $73-billion stake in Apple, $33 billion in Bank of America stock and $22 billion in Coca-Cola shares.

Buffett also noted that Berkshire valued its roughly 27 per cent stake in Kraft Heinz, the packaged foods company that was one of its biggest recent deals — and one of its most prominent investing flops in recent years — at about $13.8 billion. By contrast, Buffett's annual letter in 2018 valued its Kraft Heinz stake at $17.6 billion.

The billionaire also took time to complain about the poor state of many corporate boards:

— Too few women serve on them.

— Directors are often captive to the management teams they are meant to supervise, particularly when it comes to acquisitions that chief executives want to make. "Don't ask the barber whether you need a haircut," he wrote.

— Too many directors go along with management teams in hopes of getting a good reference so they can be added to a second corporate board and earn more paychecks. "When seeking directors, CEOs don't look for pit bulls," Buffett wrote. "It's the cocker spaniel that gets taken home."

Yet as in many years past, this year's letter did not dwell on the topic Berkshire shareholders want most desperately to know: who will succeed Buffett, now 89, as the conglomerate's chief executive. Time and again, Buffett has said only that he has someone in mind and in the meantime has no plans to retire anytime soon.

In Saturday's letter, Buffett reiterated that Berkshire was "100 per cent prepared" for the day that he and his longtime business partner, Charles Munger, 96, leave the scene. The reasons: Berkshire's investments are strong and prudent, the company's businesses are overseen by able managers, and its remaining directors are trusted to stay the course.

The letter reflected one more sign that Buffett was willing to share the limelight with his lieutenants, Ajit Jain and Greg Abel, both of whom have been widely speculated as potential successors.

Buffett said that he would allow attendees of Berkshire's annual shareholder meeting in May to direct questions — part of a long-standing tradition where he and Munger answer queries on any topic — to either of those men.

Also left unaddressed in the letter was Buffett's most recent deal, the sale of Berkshire's newspaper holdings, in a sign that he was giving up on the news business.

Facebook and Google plan to start paying publishers. That's the wrong solution to a much bigger problem in media.