“With these smaller newspapers drying up across the country, it is creating a collapse of local newspapers and local news and the kind of information (they provide) around the country,” said Brown, who is known for her reporting on accused sex trafficker Jeffrey Epstein. “Because there isn’t the number of voices and the number of local newspapers, (that) has contributed to the divisions that we’re experiencing around the country.”
Brown’s comments come just days after the Herald’s owner, McClatchy (MNI), filed for bankruptcy, throwing the future of her paper and 29 others across the country into question.

It’s the latest in a years-long decline of local news. Late last year, US newspaper giants Gatehouse and Gannett merged, leading to job cuts and consolidating hundreds of the country’s daily newspapers under one company. Around the same time, hedge fund Alden Global Capital became the biggest shareholder in Tribune Publishing, which owns the Chicago Tribune, the Baltimore Sun and the Hartford Courant, among others. Staffers protested the decision and Tribune Publishing has already offered a round of buyouts to employees this year.
Labor Department data show that jobs at newspapers have fallen every year since 1998, a net loss of nearly 300,000 jobs during that period. That represents a nearly 70% drop in employment. 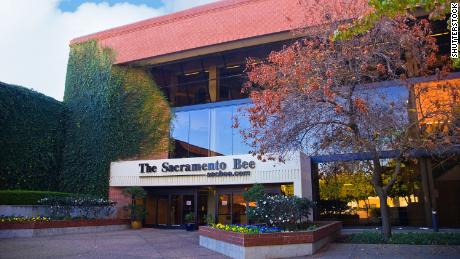 McClatchy said it plans to stay in business and emerge from bankruptcy in the next few months. The company had been trying to reduce operating expenses, but it wasn’t enough. It posted a net loss in the hundreds of millions and a revenue decline of 11% in the first nine months of 2019. It plans to use bankruptcy to reduce legacy debt and pension obligations, and that the process will help it transform more quickly into a digital news company.
Brown said that while staffers at the Herald — a Pulitzer Prize winning newspaper regarded for its investigative reporting — are staying hopeful, the future of the paper is “an unknown.”
“I don’t think we know what the impact is going to be,” Brown said. “We’ve seen this around the country where some of these other chains have been bought up by hedge funds and, in some cases, they’ve dismantled some of these local newspapers. So of course we’re hoping that won’t happen to our paper and the papers that are owned by McClatchy.”
Media industry analyst Ken Doctor said the trend of hedge fund ownership could be troubling for the long term success of local news.
“Clearly, reader habits have changed, but this isn’t news, it’s 2020. This has been a transition that has not worked, these companies are dependent on print,” Doctor said Sunday. Still, he said there is money to be made from owning newspapers — at least in the short term.
“The people who are making it are the people who are willing to make those tough decisions and cut into the product knowing that they’re not building a product for tomorrow, but taking the money in the short term,” Doctor said.

It really isn't a whole lot of money considering that you're investing in people at those newspapers who are there to hold your elected people, people who are in power, accountable."

But there is still hope for the industry in the form of new business models, such as nonprofit newsrooms or those with wealthy private owners, including the Washington Post and the Los Angeles Times. Doctor said funding from tech giants like Facebook and Google could also help, though those same companies’ internet advertising platforms are largely thought to be responsible for tanking newspapers’ ad-supported revenue models.
“There’s also a lot of push to get Google and Facebook to actually pay for licensing money to these companies and I think we’re going to see a lot of that as antitrust comes up,” Doctor said, referencing the growing antitrust scrutiny of many major tech giants.

Brown also urged readers to subscribe to their local newspapers.
“Most people I would think pay $100 to $200 a month on their cable subscriptions,” Brown said. “Newspapers are a fraction of that. Digital subscriptions are $10 to $15 a month. It really isn’t a whole lot of money considering that you’re investing in your community and you’re investing in people at those newspapers who are there to hold your elected people, people who are in power, accountable.”
Source: Read Full Article

SEISS amount: When is the self-employed grant paid?