The boss of Brambles says the company operated in an environment of increasing economic "uncertainty" in the first half, as the global logistics giant reported a 13 per cent fall in its interim statutory profit.

But Graham Chipchase said Brambles managed to deliver shareholders earnings and sales growth across all of its segments, despite first half challenges.

On a statutory basis the company's first half profit dropped to $US277.9 million ($413.8 million), but this was largely due to the sale of a plastics containers business in the previous financial year, which made no contribution to earnings in the first half of 2019-20. 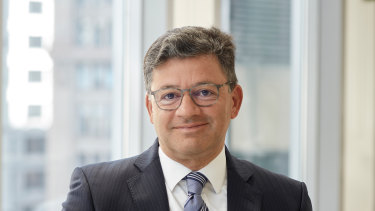 On an underlying basis the company recorded an underlying profit from continuing operations of $US278.9 million, up four per cent on the prior corresponding period.

The company will pay a 30 per cent franked interim dividend of 13.38 cents on April 9, down from 14.5 cents in the prior corresponding period.

"Despite a range of challenges, we delivered sales and earnings growth across all our segments and materially improved group cash flow generation in the first half," Mr Chipchase said.

"Our operating environment in the first-half was characterised by increasing macroeconomic uncertainty and ongoing political instability, particularly evident in major European markets," he said.

Brambles said labour and property inflation in the US continued to increase, but on the other side of the coin US transport and labour inflation continued to moderate.

"In this context, our first-half sales performance reflects the resilient nature of our business as we continue to expand with new and existing customers despite price realisation to recover higher costs in most markets," Mr Chipchase said.

In early trade on the Australian market Brambles shares were up two per cent to $12.90.