Few Americans see the United Arab Emirates as a shining example of human rights. But as mayor of New York City, Mike Bloomberg allowed the New York Police Department to initiate and expand a law enforcement relationship with the repressive government there at a time when the UAE was known to be practicing aggressive policies that would be illegal in the United States.

“They’re doing stuff there that makes stop and frisk look like child’s play,” said Ben Freeman, who tracks foreign influence in the U.S. at the Center for International Policy.

Beginning in 2008, the partnership placed NYPD officers in the UAE and approved intelligence-sharing between the police force and a regime known for persecuting political opponents. The UAE donated $1 million toward the collaboration and ultimately hired the architect of Bloomberg’s widely criticized Muslim surveillance program.

Bloomberg is citing his experience as New York mayor to argue he is prepared to be commander in chief. Presidents from both parties have largely treated the UAE as a trusted partner ― experience handling the country is no black mark. Yet Bloomberg’s connection to a rare and little-understood link between that government and a thousands-strong local agency shows a perspective that worries advocates for civil liberties and democracy abroad. The relationship he greenlighted gave a new level of legitimacy to a government that watchdogs consider one of the most authoritarian in the Middle East and risked inspiring police officers dealing with Americans to seek a troubling degree of power.

Bloomberg has sustained his relationship with the UAE in the years since, as well, praising it for donating tens of millions of dollars to his alma mater, Johns Hopkins University, and hosting a high-profile conference there last year. That fits a pattern of comfort with autocrats, particularly those who justify hardline practices by talking about national security. The Democratic presidential candidate has claimed Chinese President Xi Jinping is “not a dictator” despite Xi’s moves to centralize power, suggested U.S. criticism of Russian President Vladimir Putin is hypocritical and praised Saudi Arabia following a global uproar over Saudi agents’ murder of journalist Jamal Khashoggi.

Bloomberg did not respond to a request for comment. Nor did the NYPD.

The NYPD Sees A Friend In The UAE

Elected shortly after the attacks of 9/11, Bloomberg allowed his hand-picked police commissioner, Ray Kelly, to focus on terrorism in an unprecedented way.

Kelly established a new role, deputy commissioner for intelligence, and filled it with a 35-year CIA veteran named David Cohen. He set up an International Liaison Program that sent NYPD officers to foreign cities to work with law enforcement there, dodging a restriction in the city charter that stops officers from working in other jurisdictions by paying for the project with money from the New York City Police Foundation, a nonprofit backed by wealthy New Yorkers.

Because the program doesn’t rely on public funding, “there is a lot that’s shrouded from public view and a lot of concerns, especially given the size of department and its foreign activities,” said Rachel Levinson-Waldman, a senior counsel at the Brennan Center for Justice at New York University. “The NYPD generally tries to operate without a lot of oversight.”

In 2008, the police chief announced that Abu Dhabi, the UAE’s capital, would become the latest city to host an NYPD representative, at an Emirati agency protecting the country’s sensitive infrastructure. UAE representatives cited the relationship as evidence of their cooperation with the U.S. to American counterparts at a high-level dialogue the following year, a diplomatic cable published by WikiLeaks shows.

Larry Sanchez, a CIA official sent to support the NYPD who formally joined the department as Cohen’s deputy in 2004, was a top intermediary with high-ranking Emiratis. He “won them over by his commitment to them,” a former law enforcement source told Foreign Policy.

Sanchez had already made an impact in New York that reflected the style of his autocratic counterparts. He built the spying program that designated mosques as terror organizations and focused on Muslim communities based on their religious identity rather than evidence of wrongdoing, The Associated Press later revealed.

Once his activities began drawing scrutiny, as Muslims spoke out about their treatment by the NYPD and federal officials worried that the department’s intelligence collaboration represented a CIA overreach, Sanchez left the department in late 2010. Just months later, he began crafting a new spy network ― this time for the UAE, the Foreign Policy investigation revealed. 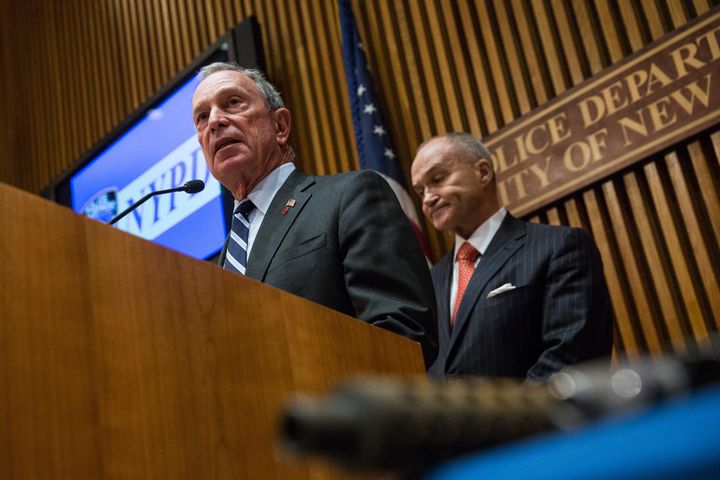 Starting in 2011, the UAE’s law enforcement apparatus focused more intensely on tamping down dissent in response to the Arab Spring-era protests against authoritarians across the region. The country’s rulers saw supporters of political Islam, who demanded more accountable governments more influenced by religion, as their biggest threat because of their potential appeal to regular citizens, and called them not just political opponents but extremists. The perception jibed with the NYPD’s philosophy at the time: treating any connection to the Muslim faith as a potential security risk.

Emirati security forces arrested dozens of activists, government critics and foreign nationals in 2011 and 2012. Some said they experienced torture that included beatings and being hung from a wall.

The crackdown at home contrasted with a soft approach to friends abroad like the NYPD: In 2012, the UAE gave $1 million to the secretive police foundation, according to a tax form published by The Intercept years later. It remains unclear what the money went to. Though the foundation gave the same amount of money that year to the department’s intelligence division to support the International Liaison Program, a foundation spokesperson told the outlet the gift went to upgrading equipment and facilities.

The foundation did not respond to a HuffPost request for comment.

That November ― just before the end of his and Bloomberg’s tenure ― Kelly flew to the country to sign a new deal enabling the exchange of ideas and training methods, his spokesman John McCarthy told the New York Daily News. He noted that though most such agreements were finalized at police headquarters, Emirati officials specially requested that Kelly visit.

The close ties between local police and a repressive security apparatus makes Americans vulnerable and threatens the ideals the country says it stands for, Levinson-Waldman of the Brennan Center said. NYPD officials could be introduced to UAE techniques around surveillance and then try to convince courts back home to allow them to deploy similar methods, she said, or feel pressured to provide intelligence on individuals the UAE sees as threats for behavior that would be permitted in the U.S.

Embracing the UAE as it clamped down on popular movements across the Muslim-majority world is morally fraught too, said Iyad el-Baghdadi, a pro-democracy activist who was detained and then deported by Emirati authorities in 2014.

Its mass arrests represented “a complete decapitation of any native movement that can actually push for political reform” and it has been a crucial supporter for aspiring dictators beyond its borders, in contexts like Egypt and Libya, he said, exacerbating public resentment that could drive people to extremism.

“People are waking up to the fact that they are not the forces of stability ― they are creating instability,” said el-Baghdadi, who obtained asylum in Norway and now runs a think tank called the Kawaakibi Foundation. “Their game has been to be the arsonist and the fireman at the same time.”

Still, the NYPD’s partnership with the UAE has grown. Sanchez remained in place in the UAE as of 2017, and that year, the country’s embassy announced it was donating an additional $2 million to the police foundation ― this time explicitly saying it was for the International Liaison Program. In 2018, NYPD cars featured stickers proclaiming, “The Year of Zayed,” a reference to the UAE’s founding father.

“This fits a pattern that we’ve seen with Emirati influence in the U.S…. they really spread their influence around,” said Freeman of the Center for International Policy. “My concern here is that it’s one thing to donate to hurricane relief, but when it comes to policing, there are just so many terrible things happening in the UAE.”

Fortnite players FUMING as connectivity issues prevent them from logging in

Democrats To Control Senate, House And White House For First Time Since 2009