Biden: ‘We should be further along’ in the transition process

With new coronavirus cases surging again from coast to coast, President-elect Joe Biden is warning of a potential grim milestone.

Biden, speaking on a video conference call Wednesday with frontline workers from across the country, noted that public health experts have said that we could see “as many as 200,000 dead…by the time we get sworn in.”

Biden lamented that the death toll from COVID-19 “has reached a proportion that is way, way, way, way, out of wack” and that it’s “skyrocketing with no real end in sight.” 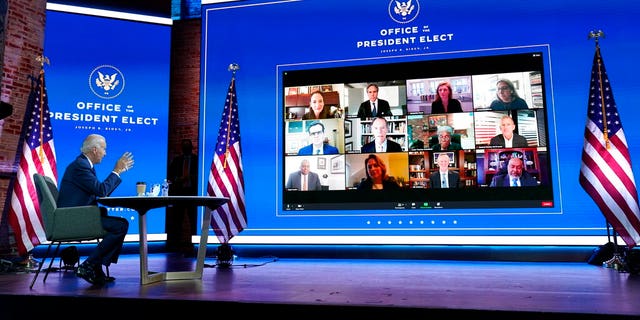 Biden spoke as the national death toll from coronavirus related cases is closing in on a quarter of a million people. And the daily death toll on Tuesday reached roughly 1,700, the highest level since May. There have been more than 11.4 million new cases of the virus since the pandemic swept the nation in February and March.

Public health experts have cautioned that the nation’s death toll from COVID could double by the beginning of March. And the former vice president’s been spotlighting the potential of 200,000 additional deaths in coming months since late October with his warnings of a “dark winter.”

Biden, who was in his hometown of Wilmington, Del., was joined on the video conference call by Marcella Nunez-Smith, Yale University’s associate dean for health equity research and a co-chair of the president-elect’s COVID advisory board. They listened to and asked questions of four people on the frontlines in the battle against the pandemic – an ICU nurse from Minnesota, a school nurse from Ohio, a firefighter from Indiana, and a homecare worker from Washington State. All four were also union members with local or state leadership positions.

The conversation turned emotional when Mary Turner, the ICU nurse and president of Minnesota Nurses Association, told Biden that "I myself have held the hand of dying patients who are crying out for their family that they can't see.”

Her voice breaking, Turner emphasized “we know we are facing immense death and suffering in the coming weeks, and we will be there. But we need to act now to protect our workers so we can save as many lives as possible.”

Biden quickly replied, “No, you got me emotional.”

He praised all four frontline workers, saying “this crisis has showed the nation we literally couldn’t survive without you all. And I mean that sincerely… It’s not hyperbole, you’re heroes.”

But he stressed that “it’s not enough to praise you. We have to protect you and pay you. And you deserve leadership that listens to you and that works as hard for you as you do for the families in your communities.”

The president-elect, as he has in recent days, warned that President Trump’s refusal to allow the transition between administrations to formally begin.

“We’ve been unable to get access to the kinds of things we need to know about,” he noted. “Unless it’s made available soon, we’re going to be behind by weeks or months, being able to put together the whole initiative” to combat the pandemic.

Fox News, other news networks and the Associated Press, projected a week and a half ago that Biden would win the state of Nevada and the commonwealth of Pennsylvania, which would give the Democratic presidential nominee the electoral votes needed to defeat Trump and become president-elect. But Trump has yet to concede, as he hopes that a spate of apparent longshot lawsuits he’s filed and a couple of recounts in key states will reverse Biden’s victory.

General Services Administration chief Emily Murphy, who was appointed by Trump, has yet to sign a letter of “ascertainment,” which until now was a mostly controversial-free process of declaring the winner of the White House race. The document gives the president-elect's transition team access to the federal agencies, and money to fund the transition.

Biden, in his comments, also took a swipe at Trump’s style of governing when he emphasized that when he takes over in the White House, “I’ll make mistakes but I promise you I’ll acknowledge them when I make them as well as I’ll take responsibility.”

Biden at G7 will pledge $4B for global vaccines, stress US commitment to multilateralism

Apple launches NEW 'limited edition' AirPods – and there are just 25,000 in the world