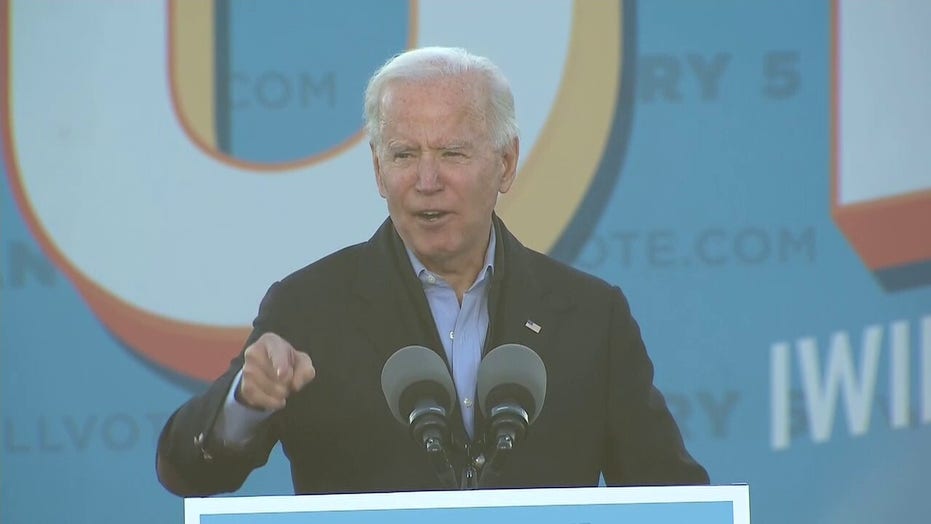 President-elect Joe Biden blasted President Trump on Monday for what he described as a painfully slow administration rollout of the COVID-19 vaccine.

Biden spoke in Atlanta as he campaigned with the two Democratic challengers on the eve of Georgia’s twin Senate runoff elections, which will decide whether Republicans keep their Senate majority. The former vice president said "it’s a shame what’s happening now" with the vaccine, charging that "this administration’s gotten off to a God-awful start."

But Biden made no direct mention of a controversial recorded phone conversation between the president and Georgia Secretary of State Brad Raffensperger – which went viral on Sunday and dominated media headlines. 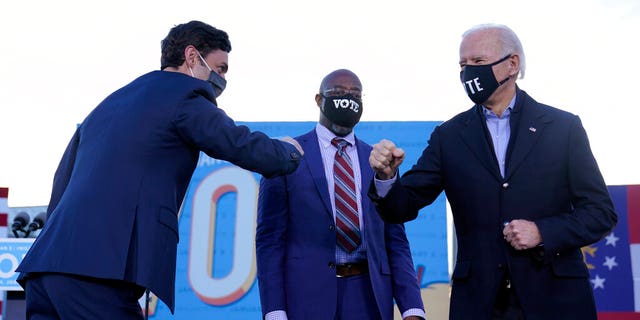 At one point in the leaked conversation, which was first reported by the Washington Post, Trump reportedly told the Republican secretary of state: "All I want to do is this. I just want to find 11,780 votes, which is one more than we have, because we won the state."

That’s one vote more than the 11,779 votes that Biden topped Trump by in Georgia, according to the state’s certified election results. The ballots in Georgia were counted three times – the original Election Day count, a mandatory hand recount, and a recount requested by the president’s campaign. Trump has refused to concede to Biden and claimed for two months that there was massive voter fraud in Georgia and five other states where he was edged by the former vice president.

Biden panned Trump for "whining and complaining" rather than acting as president. "I don’t know why he still wants the job," Biden said of Trump. "He doesn’t want to do the work."

The Election Eve rallies by the outgoing GOP president and his Democratic successor were the second in Georgia for each since the runoff campaign began following November’s general election.

The balance of power for the next Senate coming out of November’s elections is 50 Republicans and 48 Democrats. This means Democrats must win both of Georgia’s runoff elections to make it a 50-50 Senate. If that occurs, Vice President-elect Kamala Harris would be the tie-breaking vote, giving her party a razor-thin majority in the chamber. The Democrats hold a slim majority in the House.

But if Democrats do not sweep the two elections, the GOP would retain the chamber, and Senate Majority Leader Mitch McConnell, R-Ky., would keep his position — and the ability to stymie many of the proposals Biden hopes to pass through Congress.

Tuesday's vote in Georgia came about because state law dictates a runoff if no candidate reaches 50% of the vote, Perdue narrowly missed avoiding a runoff in November, winning 49.75% of the vote. Ossoff trailed by roughly 87,000 votes.

In the other race, Loeffler captured nearly 26% of the vote in a whopping 20-candidate special election to fill the final two years of the term of former GOP Sen. Johnny Isakson, who stepped down due to health issues. Loeffler was appointed to his seat last December. Her opponent Warnock won nearly 33% of the vote.

For Biden, who in November became the first Democratic presidential candidate to carry Georgia in more than a quarter-century, Monday’s rally was all about location. Early voting turnout has soared in the Democratic strongholds of Atlanta — and the capital city’s surrounding inner suburbs – and Democrats didn’t want to let up on the eve of the election. 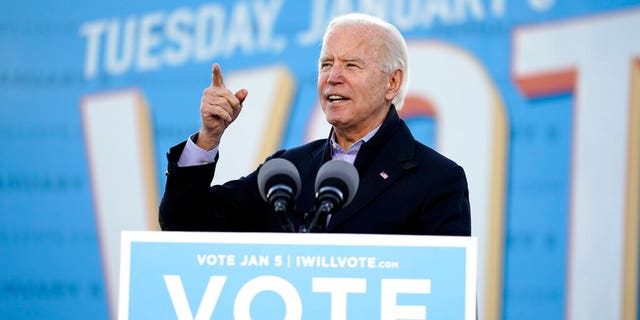 "Georgia, the whole nation is looking to you to lead us forward," Biden emphasized. "The power is literally in your hands. Unlike any time in my career, one state, one state can chart the course not just for the next four years but for the next generation."

Biden added, "By electing Jon and the Reverend, you’ll be voting to get the states the resources they need to get the vaccines distributed."

Only around four million Americans received the first of two doses of the COVID vaccine, with just over 13 million doses having been delivered, according to the Centers for Disease Control and Prevention. Logistical problems are plaguing the Trump administration’s distribution efforts, especially states struggling to administer doses that have already been sent by the federal government.

Last week Trump took aim at the states for the slow rollout, tweeting, "The Federal Government has distributed the vaccines to the states. Now it is up to the states to administer. Get moving!"

Biden, in his comments on Monday, also spotlighted the inability of Congress and the current administration to boost coronavirus relief checks to Americans from $600 to $2,000.

Biden highlighted that "by electing Jon and the Reverend, you can break the gridlock that has gripped Washington and the nation."

A graphic video showing an apparent suicide is circulating on TikTok, and users are warning each other not to watch it