Politicians and political commentators mocked President Biden for a gaffe Tuesday when he said “we didn’t have” the COVID-19 vaccine when he came into office.

Biden made the slip-up during a CNN town hall with host Anderson Cooper. He had said earlier in the town hall that there were “50 million doses that were available” when he took office, in response to a question about his administration’s vaccine rollout.

“It’s one thing about the vaccine – which we didn’t have when we came into office – but a vaccinator, you need the needle, you need the mechanisms to be able to get it in,” the president said. “Now, we have made significant strides increasing the number of vaccinators.”

Biden received his second dose on Jan. 11 as president-elect, three weeks after getting his first one with television cameras rolling in an attempt to reassure the American public that the inoculations are safe. 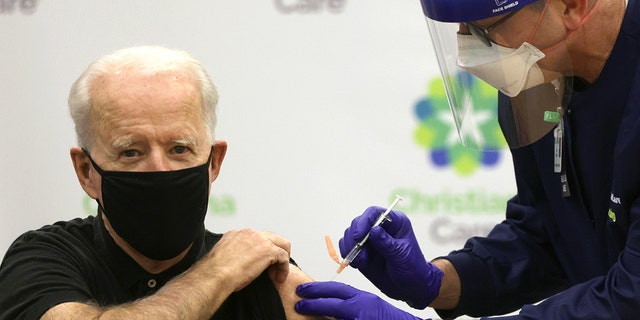 The White House did not immediately respond to an inquiry from Fox News.

Biden said Pfizer agreed to “go to 600 million doses,” and his administration used the National Defense Act to “help the manufacturing piece of it to get more equipment and so on.” He added that the 600 million will be available “by the end of July.”

“Biden says there was no vaccine when he came into office. That is abjectly FALSE. President Trump brought about the fastest vaccine for a novel pathogen in history. How does Joe get away with this?” she tweeted on Tuesday.

Republican Colorado Rep. Lauren Boebert appeared to mock the president’s memory in a Tuesday tweet responding to a video clip of the gaffe.

“In case anyone was wondering why Kamala is the one taking the calls with foreign heads of state,” she said.

But fact-checkers at CNN and the Washington Post downplayed the comment, sparking claims of a double standard from some politicians and commentators.

CNN fact-checker Daniel Dale said Biden “clearly wasn’t trying to claim the vaccine did not exist at all under Trump,” while Washington Post fact-checker Glenn Kessler called the comment a “verbal stumble,” and said former Trump officials should “cool the outrage meter.”

The president’s comments come after Vice President Kamala Harris said in an interview published Tuesday that the Biden administration was “starting from scratch” in its plan to roll out COVID-19 vaccines, rather than start from where the Trump administration left off.

“There was no stockpile … of vaccines,” Harris told Axios co-founder Mike Allen. “There was no national strategy or plan for vaccinations. We were leaving it to the states and local leaders to try and figure it out. And so in many ways, we’re starting from scratch on something that’s been raging for almost an entire year!”

Dr. Anthomy Fauci, who is helping lead the White House’s coronavirus response, defended the vice president’s comments in a Tuesday interview on CNN.

“What I think the vice president is referring to is, the actual plan of getting the vaccine doses into people’s arms was really rather vague. I mean, it was not a well-coordinated plan,” he said.

Actually delivering vaccines to communities, he explained, was something that forced the new administration to “get much better organized, with getting the community vaccine centers, getting the pharmacies involved, [and] getting mobile units involved.”

Sony is giving away two FREE PS4 games in April – including Uncharted 4: A Thief's End

Virginia poised to abolish death penalty, first southern state to do so