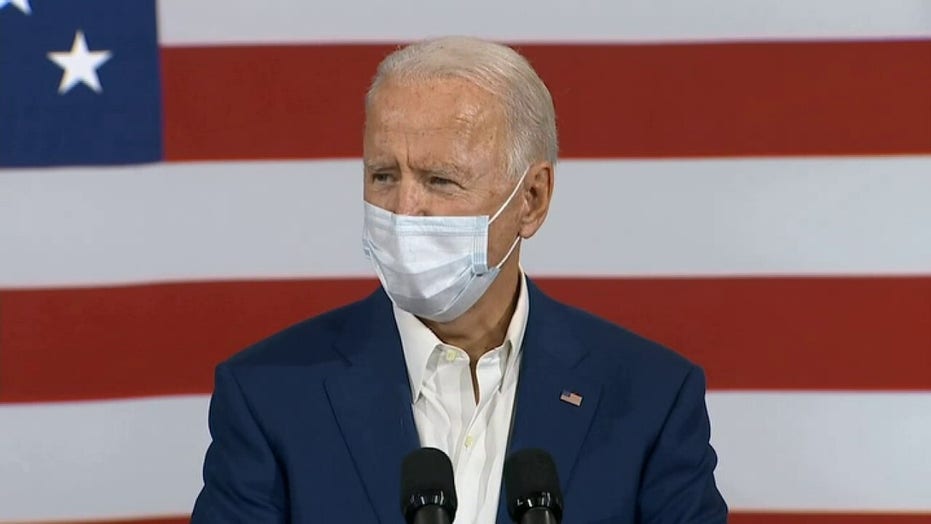 Biden: We can’t let ourselves become ‘numb’ to the coronavirus pandemic

Former Vice President Joe Biden speaks on the impact coronavirus has had on the U.S. at a campaign event in Manitowoc, WI.

As the national death toll from the coronavirus pandemic passes 200,000 people, Democratic presidential nominee Joe Biden cautioned that Americans must avoid “becoming numb to the toll that is taken.”

The former vice president, speaking Monday at an aluminum manufacturing foundry in the crucial battleground state of Wisconsin, once against blasted President Trump’s handling of the pandemic, saying “Trump panicked. The virus was too big for him.”

Biden also made a personal plea to voters who supported President Obama in 2012 but voted for Trump in 2016, saying he understands why they fled the Democratic Party and vowed if he’s elected, “you will be seen, heard and respected by me.”

The trip was Biden’s second this month to Wisconsin, one of three states – along with Michigan and Pennsylvania – that Democrats had carried for a quarter century before Trump narrowly won them all in 2016, helping him score an Electoral College victory over Hillary Clinton to win the White House.

But four years later, an average of the latest public opinion polls in the state compiled by Real Clear Politics indicates Biden holds a 6.7 point lead over the president, virtually unchanged from a month ago. Biden’s current advantage over the president is roughly equal to the 6.5 point lead Clinton held over Trump in an average of the polls on the eve of the 2016 election. Trump ended up winning the state by just seven-tenths of a percent. 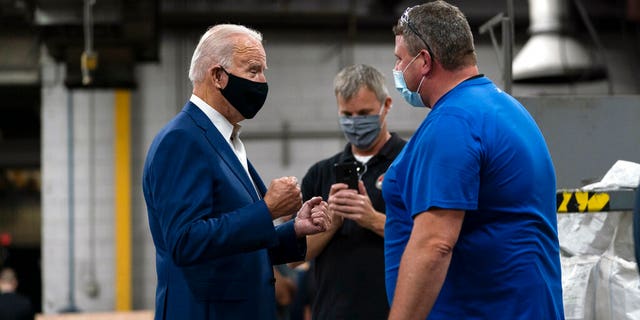 One of the reasons Trump won Wisconsin is because of voters in places like Manitowoc County, where Biden stopped on Monday. Trump carried 59% of the county’s vote in 2016, up 8 points from four years earlier.

Biden – speaking to workers after touring the Wisconsin Aluminum Foundry in Manitowoc – said "I want to spend just a few moments talking about those who voted for Donald Trump last time. When I was out here in our administration, you voted for us and then an awful lot of people in this county changed and they voted for Trump last time.”

The former vice president stressed “I know many of you are frustrated. You’re angry. You believe you weren’t being seen, represented, or heard. I get it. It has to change and I promise you this – it will change with me. You will be seen, heard and respected by me.”

Once again contrasting his working class upbringing with Trump’s privileged background, Biden charged that the president “sees the world from Park Avenue. I see it from where I grew up in a town like this, in Scranton, Pa.”

Biden again noted that he was recently reminded that if elected, he would be the first president who didn’t go to an Ivy League school in a long time. He emphasized that “it’s about time that a state school president sat in oval office, because you know what, if I’m sitting there, you’re going to be sitting there too.”

The former vice president – in his address – charged Trump held his supporters in low regard, saying  “the next time he holds (a rally), look closely. Trump keeps his distance from anyone in the rally. The folks who come are packed in tight as they can be, risking disease, mostly without masks. But not Trump, he safely keeps his distance…He’s willing to let everybody else in the crowd risk their lives, but not him.”

He also spotlighted recent comments by former White House coronavirus task force member Olivia Troye, who last week in a video supporting Biden charged the president “doesn't actually care about anyone else but himself.”

Biden – pointing to Troye’s comments – argued that “now we know what he really thinks of the people who come to his rallies from someone who saw it up close and wrote about it, up close in the White House. The former employee said he calls his own supporters ‘disgusting.’… He said one of the benefits of this pandemic is that he doesn’t have to shake their hands.”

The former vice president topped his speech by marking the grim news of 200,000 COVID-19 related fatalities in the U.S.

Biden called it “a tragic milestone” and noted that “it means there are empty chairs at dining room tables and kitchen tables that weeks and months ago were filled with a loved one, a mom, a dad, a brother, a sister.”

And he worried that “we’re risking becoming numb to the toll that is taken on us and our country and communities like this. We can’t let that happen. We can’t lose the ability to feel the sorrow and the loss and the anger for so many lives lost. We can’t let the numbers becomes statistics and background noise, just a blur that we see on the nightly news.”

Biden once again cited a Columbia University study that suggested if social distancing mandates were implemented a week earlier in the late winter, 36,000 lives across the country would have been saved. And he charged that “due to Donald Trump lies and incompetence, the past six months have seen one of the greatest losses of American life in history.”

The president and his campaign have repeatedly pushed back on such criticism, citing Trump’s early effort to suspend much of the air travel with China – where the pandemic originated – and his disputed claims of success on testing and supplying personal protective equipment to front-line workers.

The Trump campiagn on Sunday tweeted that "the U.S. set a new record Saturday with more than 1 MILLION tests for coronavirus conducted in ONE day. President Trump's national testing strategy is achieving incredible results." 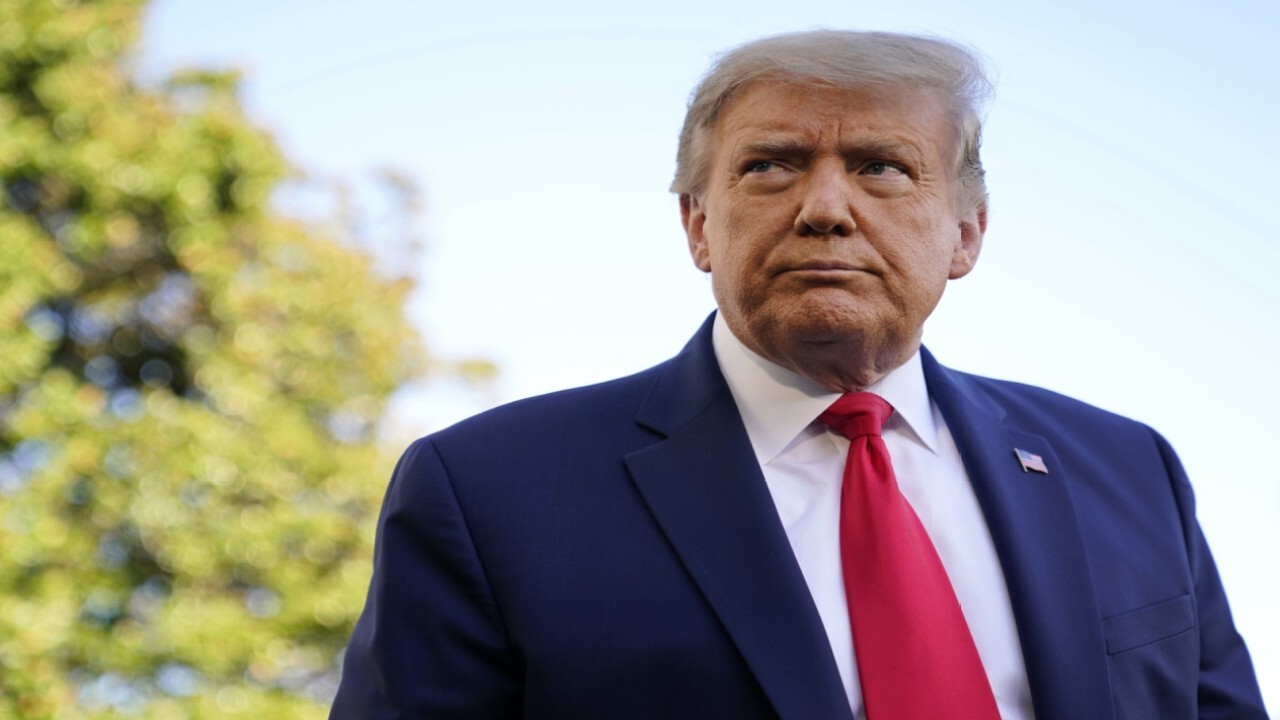 Biden – citing public health experts – warned  that “while we’re waiting for a vaccine, between now and the end of the year, we’re going to lose up to 200,000 additional lives.” And he highlighted that 115,000 lives could be saved going forward by wearing masks.

The former vice president wore a mask during his entire speech, in accordance with an indoor mask mandate implemented by Wisconsin Gov. Tony Evers. The state currently grappling with one of the highest COVID positivity rates in the nation.

The Trump campaign mocked the former vice president for apparently wearing his mask inside out.

Can Senate hold an impeachment trial for a president whose term has ended?